Welcome to another installment of Boy vs. Girl, in which we (Casey Peterson and Marisa Atkinson) read and debate new books at least one of us is really excited about. This week we discuss You Are One of Them by Elliott Holt, which is Casey’s pick. 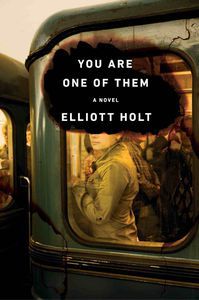 Marisa: Let’s get this out of the way: we both loved this novel. This will probably be the most boring Boy vs. Girl ever, as we both agreed You Are One of Them was fantastic. Would you put this in your top five for the year so far? Your top 25 of all time, even?

Casey: Yes. This book. THIS BOOK. I want to use Russian profanities to emphasize how much I enjoyed it, but the profanities are really dirty, and we’re a family friendly program. Also, most people don’t read the Cyrillic alphabet. But yes, it’s definitely in my top five of the year so far. I don’t see that changing. I liked it so much, that it probably cozied into the best books I read last year, too (I read it this year).

Marisa: At the reading we attended for Holt in Minneapolis, I thought it was interesting that she said this was decidedly not a spy novel. I cracked the cover expecting a novel of intrigue–some spy-related, some not–but it wasn’t until she said that that it occurred to me it actually has nothing to do with spies at all. Paranoia, though. Lots of paranoia.

Casey: So much paranoia! But it felt so true, never forced. I lived in Western Ukraine for two years and, while it isn’t the same as Moscow, it’s the same as Moscow, you know? I was always paranoid. And that paranoia causes you to make rash choices, like running down an unlit street or taking a ride from a stranger (because you don’t like the looks of someone who just climbed on your bus). It leads you to trust people because they seem slightly less suspicious than the next person. I empathized with Sarah in ways that surprised me. Or, to be more precise, I knew exactly why I was empathizing with Sarah… it was the deftness with which Holt depicted her world that caught me off guard. It’s as if I were the book’s ideal reader. (Hello paranoia.) But that’s me. Why did you love it so much?

Marisa: I honestly can’t put my finger on any one reason, so here’s a list: 1980s America, coming-of-age, girlhood friendships, a perfectly-paced plot, political intrigue, and a twist (or no twist at all?) that I didn’t see coming.

Marisa: If you had to water all the moving parts of the novel down to a two-line elevator pitch, how would you describe it to potential readers?

Casey: This is a great question. And it is something I have thought about, because I have hyped this book to so many people. Let’s go with “A friend’s death might have been faked. In the early post-Cold War Moscow, a woman pursues answers. But is it the actual truth, or will it be the truth she wants to hear?” Still, that sells it way too short. How would you pitch this?

Marisa: That’s pretty good! But there’s so much about this novel that doesn’t come through in a simple description. I’d want to find a way to slip Coca Cola, advertising, Yuri Andropov, airplanes, pen pals, and Washington, D.C. in there, too.

Casey: There’s too much good stuff to pare down, for sure.

Marisa: One of the things that struck me about the novel was how authentically Holt captured the complexities of female friendship, especially girlhood friendships. The initial devotion and loyalty, the sudden shifts in alliance and the cutting remarks, the various insecurities founded and unfounded–it was all spot on. I don’t know how all of that translates to men’s friendships, but I imagine there must be some universal themes in there…

Casey: I have a sister who is 3 years younger than me, so I was able to witness a lot of what you’re talking about. That said, I think the sort of friendship that’s portrayed here goes beyond male and female. I think there’s a competitiveness between close friends, and, in a way, that often leads to betrayal, because both friends can’t win. There’s always going to be a loser, or one who is left out. And that sense of departure, when a friend chooses a new best friend… that’s a heavy feeling of abandonment.

Marisa: Oof, yes. And Holt captured that so astutely, with every nuance in tact. It made me anxious just reading it.

Marisa: I hadn’t thought of it that deeply! I just took it for the most obvious reading: the final reveal of a true identity. But it makes sense that it should incorporate all of these various meanings (and probably some others we haven’t even thought of). That Elliott Holt knows what she’s doing!

Casey: A spoiler-free question about the end: did it work for you?

Marisa: One hundred percent. I feel like I can’t say much about it, not even vague things, because readers really do need to take the journey and wind up with a verdict on their own. (You’ll know what we mean when you get there.) But it worked for me, and I was satisfied with the way it ended. You?

Casey: I’m a sucker for endings. They’re tough to write, so when a great ending comes along… BAM. This was a great ending. Haunting.

Marisa: You got out ahead of You Are One of Them so early on, and kept urging me to read it, which I’m very glad you did. Thanks for picking this one, Casey!

Casey: I’m glad you liked it! It’s so nice to finally have a lot of people reading You Are One of Them (everyone should read it!), so I can talk about it, and nod along with their enthusiasm.

Marisa: Though readers are, of course, allowed to disagree with us! I’d love to hear other readers’ takes on this one. Leave your thoughts for us in the comments!

Tune in next time, when we discuss J. Courtney Sullivan’s The Engagements!