Welcome to another installment of Boy vs. Girl, in which we (Casey Peterson and Marisa Atkinson) read and debate new books at least one of us is really excited about. This week we offer you a double feature, and discuss The Last Policeman and Countdown City, both by Ben H. Winters. These are Casey’s picks. 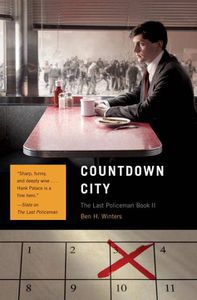 Casey: I’m going to start by saying how much I enjoyed these books. When I first heard about The Last Policeman, I knew I was going to like it. But I wasn’t prepared for how much I liked it. And then its sequel? Loved it. I’m going to guess and say that these books are a bit out of your wheelhouse: Detective novels, end of the world novels… not typically the sort of thing you’re reading, right?

Marisa: You’re right: on paper [pause for polite chuckling] these books aren’t my jam at all. But I was so into them once I started. Such is the power of Detective Henry Palace. I think readers will universally adore him.

Casey: There is something very readable about them, yeah. Both the mystery that drives each book, but definitely also Henry Palace’s voice.

Marisa: Let’s talk about Henry Palace. How much do you love him on a scale of lots and lots to tons and tons? When you grow up, do you want to be Henry Palace?

Casey: I think that Ben Winters really got this character right. Palace is about as hardboiled as they get. He talks to himself and he refuses to give up or settle for the easy answer. Plus, he can’t help but get tangled up in some broad’s sob story. Even if that broad is his sister…

Marisa: You are right there: Winters just hit his mark so perfectly with Henry. He was sweet and earnest and bumbling in the very best way. His character could have easily gone over into cartoonish caricature territory, but instead he read as incredibly authentic. I was rooting for him, I was rolling my eyes at him, I was laughing at him a little, but mostly I believed in his mission and his ideals and I wanted him to come out triumphant. He’s like all of my favorite heart-of-gold detectives from Law & Order and Criminal Minds and Blue Bloods combined. Also, he’s a dog person, so bonus points.

Casey: You’d mentioned that you liked Countdown City more than The Last Policeman. Why is that? 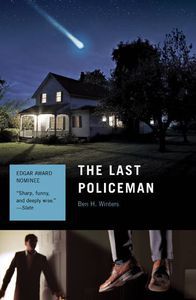 Marisa: Something I’ve learned about my reading self in the last year or two is that I love a good pending apocalypse (or post-apocalyptic) novel. I think it started with The Age of Miracles (which to this day I’m not over and think about all the time), carried over to When She Woke, and then solidified with my late-blooming Hunger Games fever. And Countdown City was much more focused on the looming apocalypse (all of the nuances of the social, cultural, political, and scientific fallout) than The Last Policeman was. It just added another layer of drama to the whole thing that I really glommed on to.

Casey: I guess we’d call these books “pre-apocalyptic”? I liked that these books, while sequential, aren’t carbon copies of each other. They’re both mysteries, but the frame that Winter built around each one was its own story. And, as such, I really can’t wait to see what he does with the third book in the trilogy. I mean, how about the ending of Countdown City? No spoilers here, but boy oh boy.

Marisa: I agree. While each book was centered on its own case, the background story carried across both books helped tie everything together. Like the best kind of hour-long television drama, almost.

Marisa: In my opinion, the only (slight!) misstep with The Last Policeman was that I thought Henry’s relationship with Naomi felt unnecessary. I really didn’t need for him to have a love interest. Henry already had plenty of other things he cared about driving him forward–his sister, his duty to the Hartford PD, Houdini. That was plenty for me.

Casey: I agree with this, it did feel tacked on. As though someone told Winters that he should really have a romantic interest. At the same time, I didn’t hate it. While it didn’t add to the overall story, I don’t think it detracted from it.

Marisa: It’s such a minor quibble it’s not even worth mentioning, really. I think it only bothered me when it pulled me away from the rest of the plot.

Casey: The Last Policeman won an Edgar Award (an award for mystery novels) in 2013. Do you think Countdown City stands a chance to also win?

Marisa: If it’s on the up-and-up for an author to win the award two years in a row, I would say why not? Absolutely.

Casey: Chalk up another win in the “Casey knows how to pick ‘em” category. These books were great, and I’m pretty sure I speak for the both of us when I say we can’t wait for the third and final (?) book in this series. Also, kudos to Quirk Books for rereleasing The Last Policeman with a cover design that matches the Countdown City. While I think I’ll always have a soft spot for the asteroid that streaks the original cover, I’m all for brand recognition.

Marisa: I love a good rebranding!

Casey: Our next book is another pick from me, David Gilbert’s & Sons. I can’t wait to bicker over how to pronounce the title…

Marisa: I’m so excited that you picked a Big New York Novel, which on paper is totally my jam. Bring it!