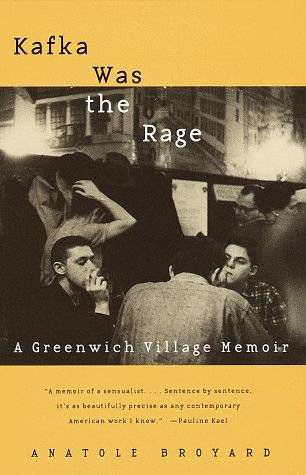 While turning the pages of a few recent nonfiction reads, I’ve come across some stopped-me-in-my-reading-tracks descriptions re: bookstores of the past. Which made me really wish I had the technology to build a time machine that could go to any bookstore throughout time and space.

Note: A time machine that could just go ANYWHERE at ANY TIME would just scare the pants off of me. I would not build that mothertrucker even if I DID have the scientific know-how. Only bad things come from building time machines that can do whatever they want. Have we not all seen Back to the Future I, II, AND III? (Especially III.)? Or every episode of Doctor Who? (Especially Creepiest Weeping Angels.) Or just any story featuring time travel ever?

A time-machine that can only go to bookstores I can do. While I’m trying to get the hang of constructing flux capacitors, let’s take a virtual trip to a bookstore I read about in Anatole Broyard’s Kafka Was The Rage: A Greenwich Village Memoir. It’s 1946. Everyone in the village is into abstract art and psychotherapy and no one owns a TV. Anatole Broyard opens up a used bookstore. You guys, I want to gooooooo.

1946 was a good time for a second hand bookshop, because everything was out of print and the paperback revolution had not yet arrived.

“The paperback revolution,” this sentence is so quaint I want to build a B&B inside it.

Buying books became a popular postwar thing to do. For young people who had just left home to go live in the Village, books were like dolls or teddy bears or family portraits. They populated a room.

I need to get this bookstore time machine working NOW. It feels like books in late 1940s GV were the equivalent of critically acclaimed cable television in my twenty-something Los Angeles world- the thing you have conversations about with smart strangers you’re just getting to know. Cultural currency you can assume people who move in your circles have in their cultural wallets. Which isn’t to say that people I meet at parties don’t read books. It’s just that I can’t ASSUME they read books the way I can assume they’ve devoured House of Cards on Netflix Instant. Most of my true-blue bookworm friends are my reader friends online (hi, everybody at Book Riot).

Basically what I’m saying is the reading community of late-40s GV sounds like religious-people heaven.

…In 1946 in the Village our feelings about books- I’m talking about my friends and myself- went beyond love. It was as if we didn’t know where we ended and books began. Books were our weather, our environment, our clothing. We didn’t simply read books; we became them… Books were to us what drugs were to young men in the sixties.

Lightning needs to strike my Delorean, like, yesterday. I would LOVE for this to be my life. Alas, alack, it can not be. I’m not surrounded by a physical community of pagans dancing naked around a pile of books the way Broyard was in late ’40’s Greenwich Village. You can love books from here to the moon, but you can’t achieve this kind of mass psychosis without thousands of real-live bibliophiles living in every apartment building on every street of your neighborhood.

There were people in the Village who had more books than money, and I appealed to them in the literary quarterlies. Like someone buying a dog, I assured them that I would give their books a good home.

I’ve got a few more cool blast-from-the-past bookstores up my sleeve, including a crazy-pants trip to a bookstore in Cultural Revolution China…

What bookstore from the past would you borrow my Bookstore Time Machine to visit?