As the saying goes, there’s no zealot like the convert. This seems to apply doubly to folks who just decided to go full Paleo after years of celebrating every life event with cake, meeting you for beers semi-regularly, and enjoying a helping of night cheese. While I’m always in support of people doing things that help them feel healthy and all-around awesome, there’s nothing worse that the newly converted preaching about how “our ancient ancestors ate” while they stare at my cheeseburger and milkshake like a half-starved coyote.

I will, of course, support my friends as they make decisions about their bodies and health (because I’m not a monster), but it’s hard to deny the whiff of bullsh*t that taints lifestyle choices described as the “natural” option.

A few years ago, I started to get very grumpy when my family and friends began using natural as a synonym for best. What makes something natural? How do you decide when something isn’t natural anymore? Why do we assume that natural is best? Smallpox was natural but it still killed a hell of lot of people. Seriously, you can often replace “natural” with “superior” or “moral” in a sentence (or marketing slogan) and it’ll make sense. Sometimes, it even makes more sense.

As we face down the season of resolutions and diet guides and deals on gym memberships, I urge you to think about what we’re really talking about when we talk about natural, healthy choices. Luckily, there’s a ton of books out there that question the meaning of “natural.”

If you’re about to throw your plate across the room while your friend goes on and on about her new diet plan, read Han Kang’s The Vegetarian. Start here because maybe, just maybe, the problem isn’t your friend. This Booker-prize winning novel made me take a hard look in the mirror and ask myself why it was that I cared so much about what my friends were or were not eating. Kang’s short novel explores how one woman’s husband, brother-in-law, and sister react to her decision to take control over her own consumption. Food here serves as a way to talk about family, trauma, sexuality, and consumption without really talking about any of those things. It’s not a book that I loved while I was reading it but I’ve found myself thinking about it often in the months since I finished it. 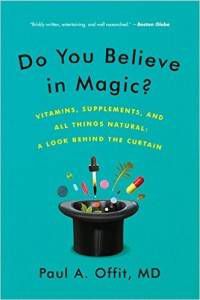 Once you’ve considered your own grumpiness (and found it 100% justified, I’m sure), turn to Do You Believe in Magic?: Vitamins, Supplements, and All Things Natural: A Look Behind the Curtain by Dr. Paul A. Offit. This is an incredibly readable book that offers up a rapid spin through medical history and quackery. Offit begins with ancient history, comes up to the 19th century’s snake oil salesmen, and ends with the likes of Dr. Oz. It’s clear that he’s tired of people who believe that herbs will cure cancer or that modern medicine is nothing but masking “pure” or “natural” knowledge of the body. Offit does acknowledge that at least some traditional/alternative/’eastern’ medicine has value– as a placebo. His chapter on the placebo effect is interesting and useful to remember when you come across articles about Olympians resorting to cupping for a competitive edge. If there’s one weakness in the book, it’s that he’s very focused on what alternative medicine gets wrong and less focused on what it is about modern/western medicine that is so deeply off-putting to so many people. 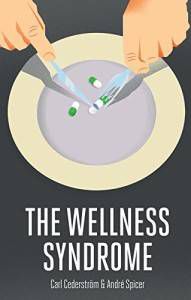 When your friend starts explaining how important it is to eat natural food, take a supplement (even if it’ll just make expensive pee), meditate, and avoid “cheating,” it can feel like its own religion. This is exactly what Carl Cederström, André Spicer argue in their pointed book  The Wellness Syndrome. They outline the ways that the push for wellness has become the secular religion of the 21st century. What I found especially interesting is the connection between wellness and modern politics that push for individual responsibility, narrow focus on the self, consumer capitalism, and strict morality. 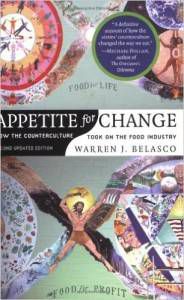 Decisions about diets, especially fad diets, are a lot like other consumer decisions. We respond to marketing and design as much as the science and politics that supports it. When I got interested in how the “natural” food industry developed, I picked up Appetite for Change: How the Counterculture Took On the Food Industry by Warren James Belasco. This book, now in its second edition, offers includes background on the ideology that focused America’s attention on food’s quality and talks about the ways that American capitalism coopted the local food coop. It’s a balanced account of the push for better food and how a certain orientation to diet became a consumer good. Belasco also talks about how food intersects with feminism, capitalism, and race. If you’re interested in how some, but not all, “ethnic” cuisine became seen as authentic or healthy, you’ll want to pick this book up. 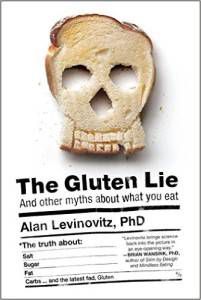 The Gluten Lie: And Other Myths About What You Eat by Alan Levinovitz is a unique take on the modern diet book. Levinovitz is a professor of religion, not medicine. While many folks in his Amazon reviews suggest that this means he’s wholly unqualified to offer health advice (and y’all, stop me from asking who they’re getting advice from), the book isn’t really health advice per se. It’s a work that looks at how we frame our food decisions and what that says about a cultural moment.

Finally, I’d suggest reading a bit from activists and researchers working in “fat studies.” There’s a ton of great writing out there on fat acceptance and health at any size, but for a strong introduction read the pieces on this roundup of books that call bullsh*t on diet culture.

Obviously, this post is more than a little tongue in cheek. There are plenty of valid health reasons (Celiac, to name just one) and environmental reasons (because ZOMG meat production is bad for the climate) to adopt a gluten-free and/or plant-based diet. My point here isn’t to shame someone for their diet but to suggest that we should be more open about how talking about food and medicine is often a way to talk about class identity and morality without, you know, talking about class identity and morality.