I know, I know. I already did “What to Read Before You See Infinity War.” But there’s more and, much to the excitement of us here in the U.S. (and boy howdy do we need something to be excited about right now), the release date for Infinity War has been pushed forward to April 27th so we don’t have to wait a week longer than our fellow geeks in the UK (I’m sorry for everything I said about you when I was jealous. And probably hungry). In celebration, I have a few more word and picture recommendations to prep your eyeholes for the big event. 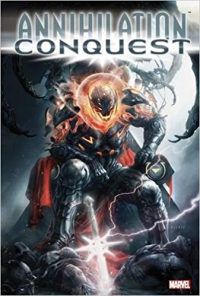 This weighty tome collects Nova #1-12 and annual #1, Annihilation Conquest: Prologue #1, Annihilation: Conquest—Star Lord #1–4, Annihilation: Conquest—Quasar #1–4, Annihilation: Conquest—Wraith #1–4, Annihilation Conquest: #1–6, and Annihilation Saga. This massive crossover event, which was first released in the early 2000s, laid the groundwork for the fantastical, colorful, hilarious Guardians of the Galaxy films. It also provides some background on the Guardians characters as they appear now and gives a human face to one of the incarnations of the character Nova (as opposed to the Nova Corps) who I know a lot of folks hope will appear in the MCU either as Richard Rider or Sam Alexander. Some of the art in Annihilation Conquest is a bit old school, so be prepared for impossible bewbs, and for Gamora to be wearing strategic strips of cloth accented with skulls rather than leather and ass-kicking boots, and some gratuitous kissy time. There is also a huge space dragon. Oh, and Cosmo the Russian talking dog, who had a brief cameo in Guardians of the Galaxy: Vol 1 but who, in the comics, is the head of security for Knowhere and is a fantastic character is present and accounted for in all of his accented glory. Ronin the Accuser is also a player in Annihilation, his role very different, and far more adherent to his deep and varied canon backstory, than the Generic Villain Number Twelve one he was given in GoTG 1 (my one major complaint about that movie). Storywise, the big bad in Annihilation Conquest are bio-mechanoid creatures who ally themselves with none than Ultron; I wouldn’t be shocked if some of those plot points find their way into either Infinity War or one of the six new movies Marvel has announced release dates (but not titles) for, since it ties the two halves of the MCU together nicely. 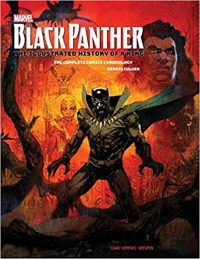 Black Panther: The Illustrated History of a King: The Complete Comics Chronology by Dennis Culver (Insight, 2018)

Promo images and the short trailers with which we’ve been graced suggest a large part of Infinity War, including what looks to be either the (or one of two) climactic battles, takes place in Wakanda, the once-reclusive nation that has only just opened itself to the rest of the world. While we got quite a bit of the nation’s history (and that of its protector) in the recent incredible film, Insight’s new Black Panther: The Illustrated History of a King tells T’Challa’s complete story from his debut in The Fantastic Four # 52 (July 1966) to his battle with Cap in Tales of Suspense: Captain America and Iron Man #98 (February 1968) to the coup attempt by T’Challa’s half brother, Jakarra (Black Panther #3, November 1977) to the advent of the Dora Milaje and T’Challa’s time as an Avenger during Christopher Priest’s run in the ’90s.  You’ll find the backstory of T’Challa’s relationship with Storm (who would, for a time, be queen of Wakanda). Discover T’Challa as the character who ties Luke Cage, now a Defender, into the larger Marvel universe. Did you know our beloved Shuri was, at one point, The Black Panther herself (if you didn’t, I’m sure you’re not surprised)? That Panther did a stint as Protector of Hell’s Kitchen? That he and Namor really, really hate each other? That T’Challa has held and wielded the Infinity Gauntlet? There is so much here that might make its way not only into Infinity War but into future Black Panther films, and besides, this King’s time to be at the center of the comics world has come. 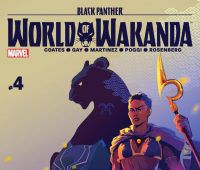 Have I mentioned this book before? Oh, I have. Well, I’m going to mention it again because 1) I’m still angry it was cancelled and 2) because it grants real insight into what the stakes for the people of Wakanda are when T’Challa (for all the right reasons, mind you) chooses to emerge from the careful secrecy that has shielded his nation for centuries. How world events affect individuals and families.

World of Wakanda shows us the human cost of the Infinity War.

For “A Fine Mess You’ve Gotten Us Into, Tony” 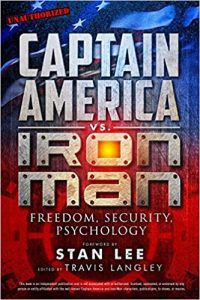 Why do heroes fight? Why does anyone fight? Depends on who you ask and when you ask them. How can men with such disparate personalities and moral codes as Steve Rogers and Tony Stark both end up heroes? That’s the deeper, more probing question asked, and answered, by the various authors who contributed to Captain America vs. Iron Man. This slim volume also examines what drew our motley band of Avengers together in the first place, the differences that provided fracture points for the team, and what it will take for the titular characters to recover from what seemed a permanent break-up when Thanos threatens existence (Cap offered assistance at the end of Civil War, but not a repaired friendship, if you recall). Can they? After the events of the last year and a half, can we repair the deep rifts in American society? What sort of heroes do we need? Do we need a Steve Rogers? A Tony Stark? Both? Or something/someone else entirely? 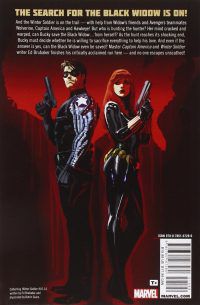 If you saw Captain America: Civil War, you know that Bucky landed in Wakanda after the final battles with Zemo and Stark. It was his hope, as well as that of and Steve and T’Challa, that advanced Wakandan tech would assist Wakanda’s scientists in eliminating the Hydra programming from Bucky’s brain, killing the Winter Soldier without killing James Buchanan Barnes or his memories. This is the future Brubaker imagined for a deprogrammed Bucky and there’s a lot to unpack, a lot to experience, a lot to thrill at. There’s also a lot of heartbreak (and while we’re on that subject, I find these two a much more likely couple than Brutasha). There’s no way everyone we’ve come to love gets out of the Infinity War unscathed; making it through this story arc may help you develop a little preemptive armor, but no promises. And while there’s a chance Bucky may end up a casualty of Thanos’s madness, Winter Soldier, and the fact Bucky’s wearing blue rather than his habitual black in the Infinity War promo shots, suggests Feige and company have another future in mind for Barnes.

Just a few weeks until we find out.