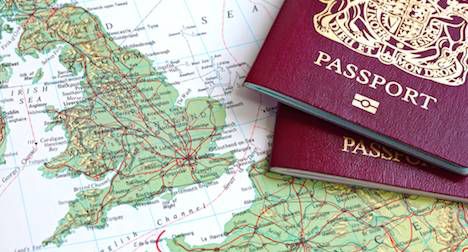 This is a guest post from Alex Laffer. Writer, editor and researcher Alex Laffer lives in a small flat in London that he is rapidly over-filling with books. He is interested in literary empathy and the way readers talk about fictional characters, and he loves reading about strange worlds – real and imagined.

Reading is important. Probably a statement that most of you will agree with. It’s something that I’ve been considering for a while now. I’ve just finished the long, and often arduous, task of writing my PhD thesis, spending many hours analysing text and listening to people talk about books, or more specifically one book: The Other Hand by Chris Cleave (published as Little Bee in The United States).

I first came across The Other Hand while working at Hodder and Stoughton (Disclaimer: this isn’t a sales pitch, I promise, I haven’t worked there for over six years). Browsing through a shelf of recently published books, it was the cover more than anything else that attracted me. Bright vibrant orange, with the silhouette of a tree surrounded by birds, and interspersed with a strange assortment of objects: fruit, weapons, a bicycle! (I’m not sure how important the bike is, but, like any good cover image, it got me reading.)

Uncertain when I started, I soon couldn’t put it down, this story of a Nigerian asylum seeker and an English journalist who tries to help her (a massively simplified synopsis but you get the drift). It got me thinking about immigration and the language that surrounds it. Little Bee, the titular asylum seeker, gave me an insight into distant others, as we learn about life in a rural Nigerian village and ‘the girls back home.’ She also provided a filter through which to reconsider what was common place in my own experiences. What interested me most was the language Little Bee used to articulate her impressions of the UK. As I studied the book, I realised that the language normally associated with immigration was being reconfigured.

If you read certain newspapers or online news outlets (naming no names) you will begin to see a pattern of how immigration and migrants are discussed; rarely as individuals, normally as groups and often as threatening – to social stability, to national security, to individual safety. You might also notice how they are frequently described as large volumes of water: tides and swamps, or waves inundating countries. Repeatedly discussing people as non-human is dangerous. How we talk about people is important, dehumanise someone enough in language, and you begin to dehumanise them in thought, ignoring the fact that at the other end of these reports are complex human beings, struggling to survive and adapt to difficult environments and sometimes hostile receptions.

What I found fascinating in The Other Hand was how it drew attention to this element of language, using these often negative descriptions but applying them to a migrant’s experience of their new environment. For example, Little Bee describes how moving through a crowd in London was like drowning in a river of people. One image, in particular, sticks in my head. Little Bee is described as ‘scum’ after mistakenly insulting a taxi-driver. This seems an unpleasant but relatively innocuous four letter word, considering potential alternatives, until Little Bee looks up what it actually means: ‘a film of impurities or vegetation that can form on the surface of a liquid.’ By stripping away the figurative language, and revealing the metaphor to the reader, we can see the dehumanisation that it implies – Little Bee is being described as waste.

The book is by no means perfect, and its authorship opens it up to wider issues of representation – something I encountered when listening to readers talk about and occasionally criticise the novel. However, it makes you think about the language we use when discussing others, which is becoming increasingly important given the current shifts in global populations.

A link between altruism and reading has yet to be conclusively proven, but if a book can get you thinking about others, empathising with fictional characters and potentially revaluating how we talk about people, then I think it’s worth sharing.