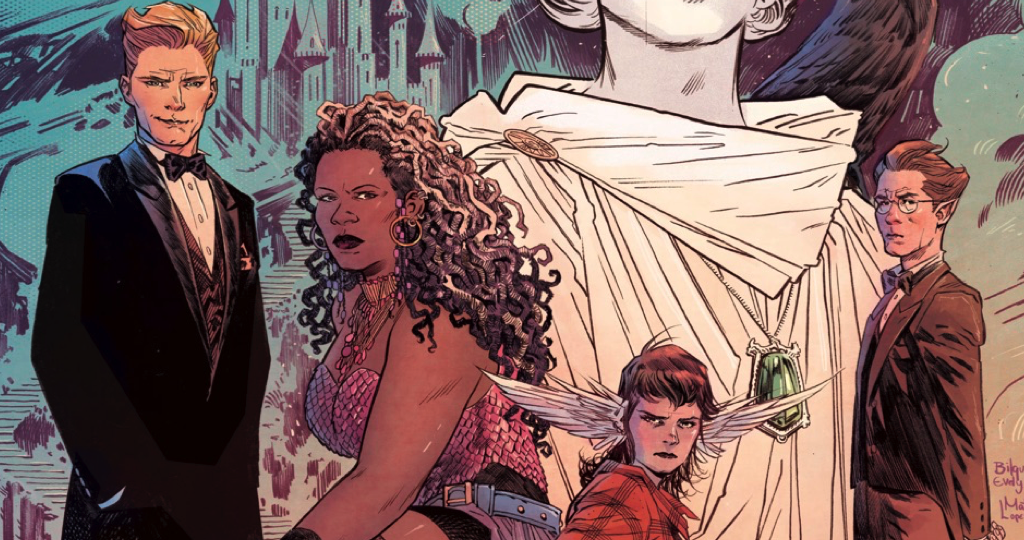 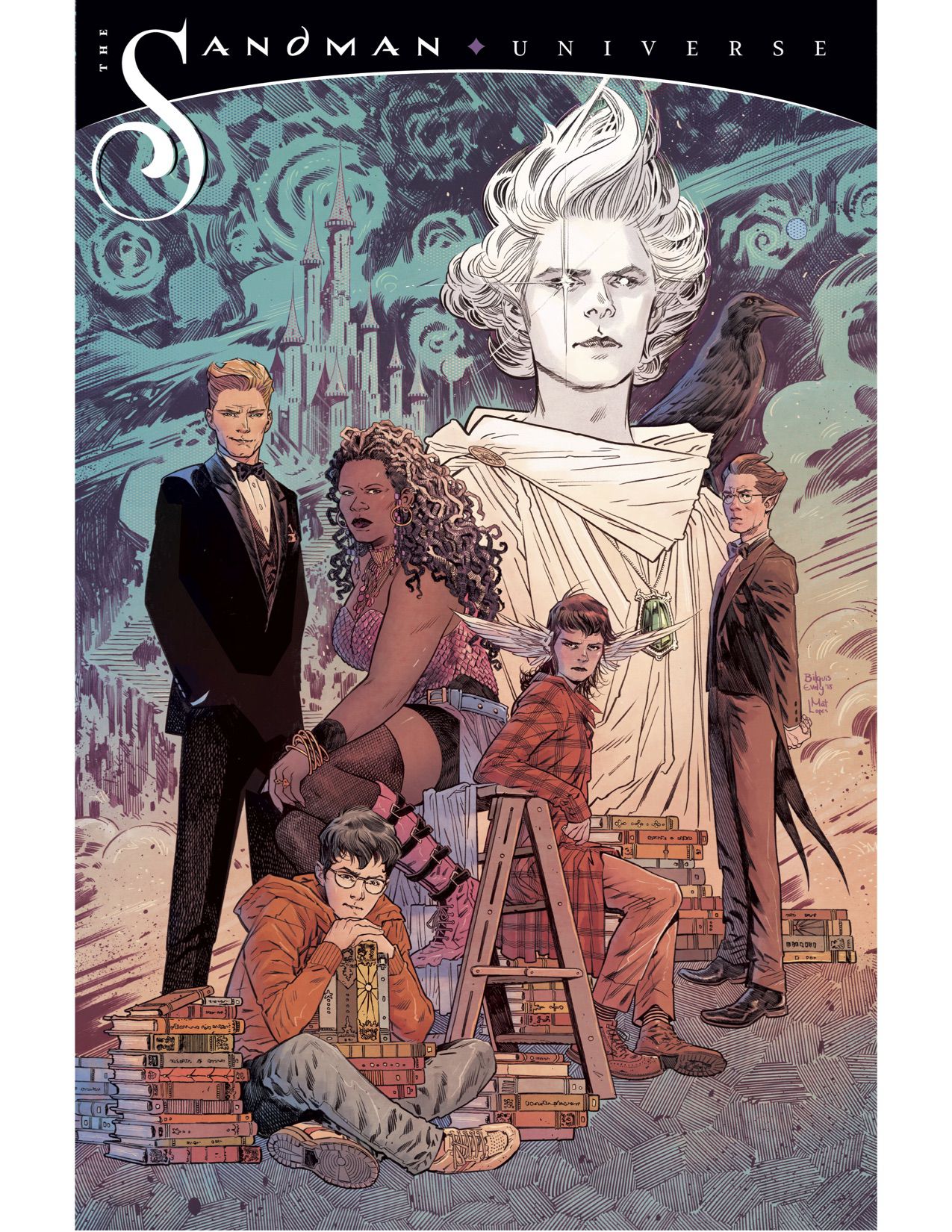 We’ve been waiting a long time for new stories of the Dreaming.

This first installment in the shared world, conceived by the maestro himself, Neil Gaiman, was written by the authors who will pen the first four books of the shared universe: Nalo Hopkinson (House of Whispers), Si Spurrier (The Dreaming), Dan Watters (Lucifer), and Kat Howard (Books of Magic) with primary art by Bilquis Evely. Also sharing in the artistic duties are Domonike “Domo” Stanton, Tom Fowler, Max Fiumara, Sebastian Fiumara, and Mat Lopes, some of whom will be be illustrating the other titles.

While folks I’ve talked to are thrilled to be getting all the new Sandman, the book many of them are most excited about is The The Books of Magic; Tim Hunter has long been a fan-favorite denizen of the Dreaming. The original The Books of Magic was a four issue mini-series, published in 1990. In it, the “Trenchcoat Brigade,” comprised of John Constantine, The Phantom Stranger, Dr. Occult, and Mister E, took Tim on a journey through the magical realms. During this trip, Tim met DC/Vertigo’s most powerful magicians and was asked to decide whether or not he would join them as a practitioner given the potential consequences of wielding his nascent powers. An ongoing series of the same name which followed Tim after he made his decision, ran 1994–2000.

Some of you may note Tim’s resemblance to another young, glasses-wearing, dark-haired wizard. Tim, in facts, predates that gentleman by approximately seven years.

One of my favorite comic panels of all time came into being during that first run: 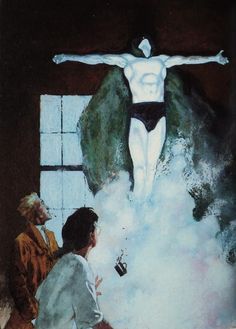 The Tim Hunter in the new The Books of Magic looks very much like the original. Gaiman explained in an interview, however, that he is his own person. He did comment, however, Tim 1.0 may well have existed in continuity, using the analogy of Barry Allen as Flash of Earth One and Jay Garrick of Earth Two to explain the connection. As to whether or not the twain will meet, Gaiman cited “potential ramifications” down the storyline as all good masters of suspense and fantasy so deftly do.

How do a new author and artist pick up such a beloved character and give him a new story after nearly two decades? How do they pay homage to his roots while making him their own?

Ever wonder how a comic gets made?

Painstakingly. In many, many steps. With a lot of discussion and a great many revisions.

Have a look, courtesy of DC/Vertigo, author Kat Howard, and artist Tom Fowler: 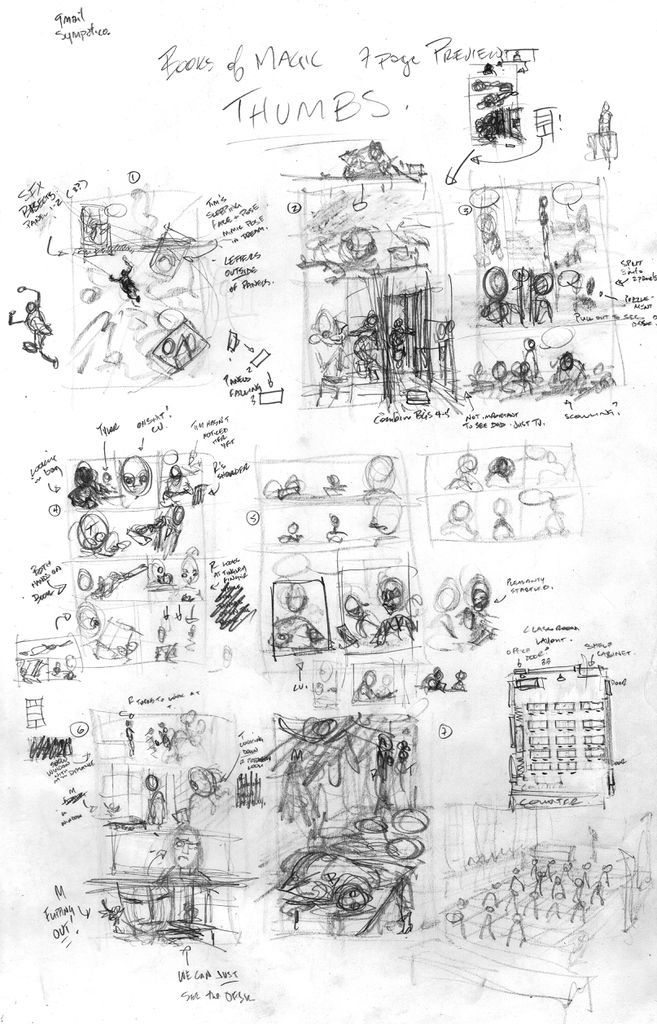 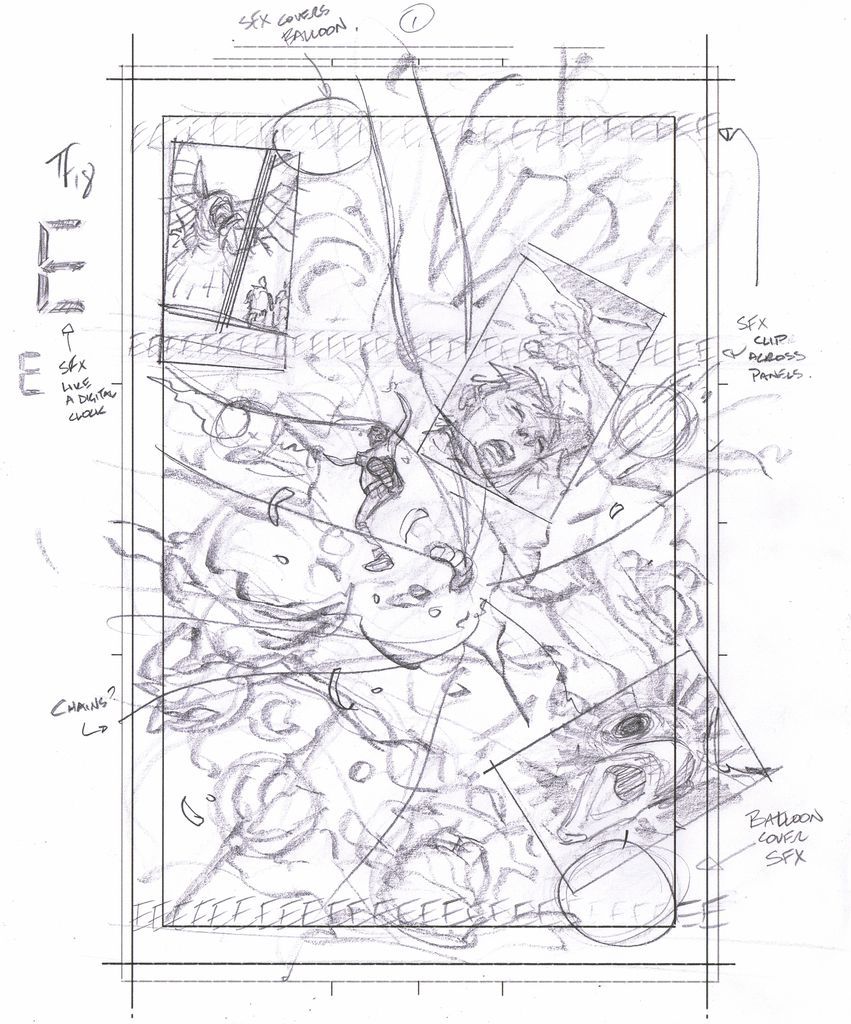 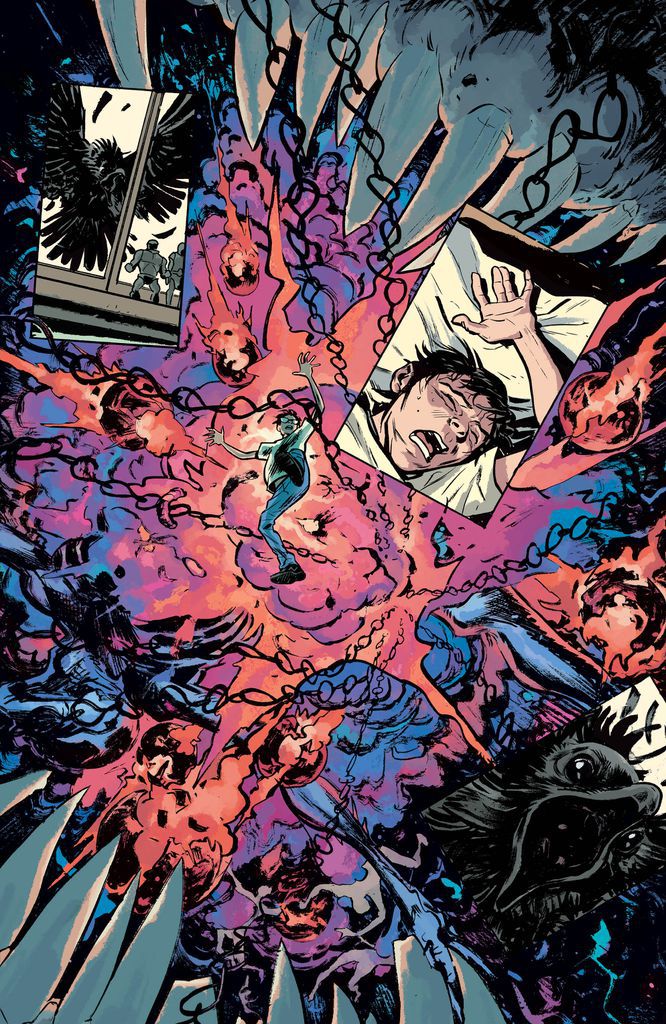 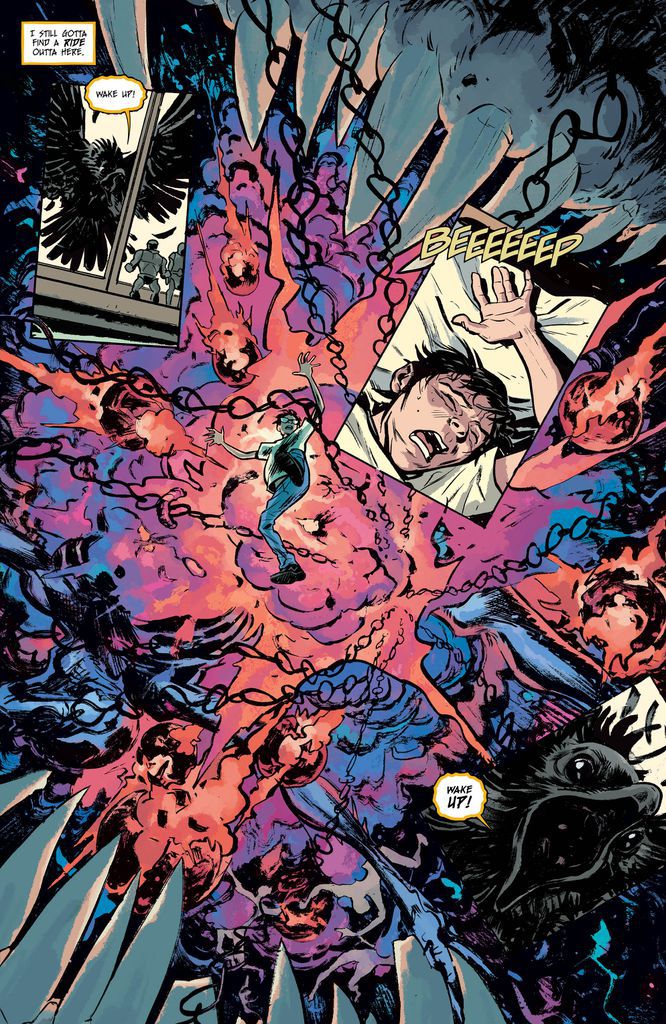 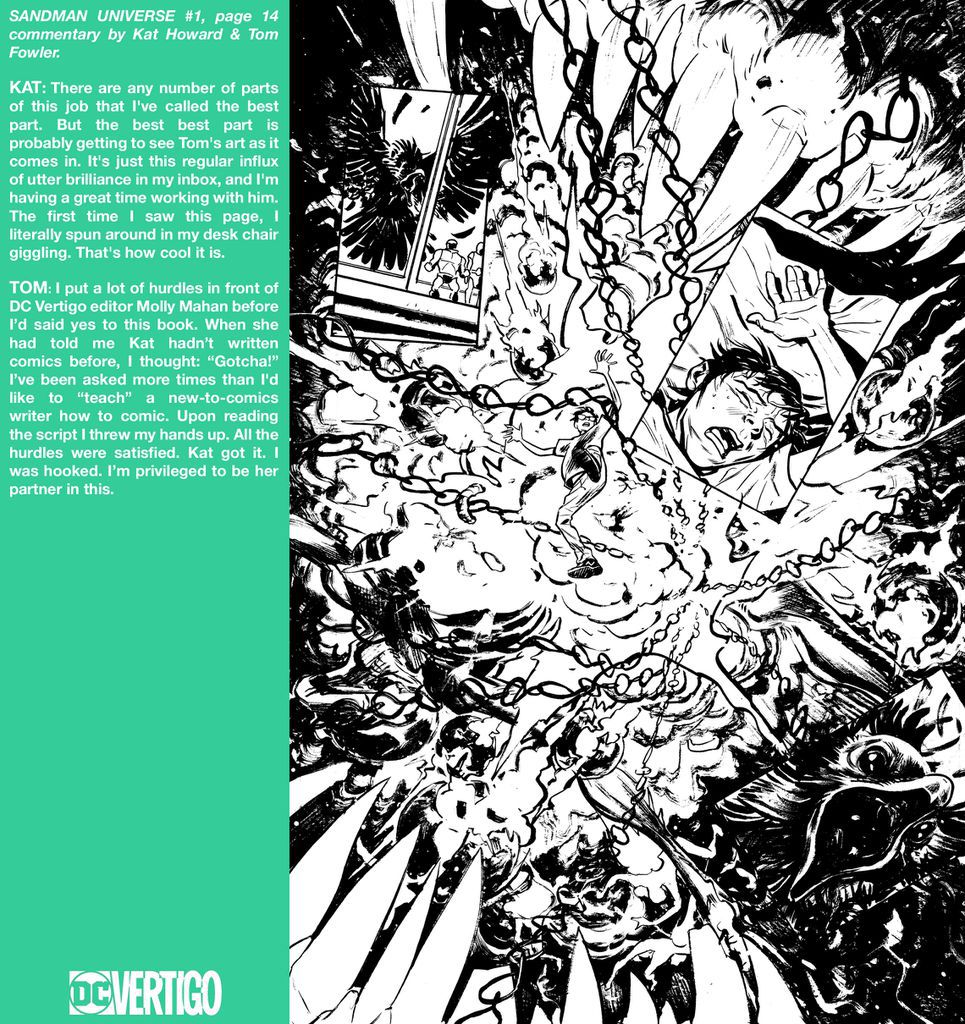 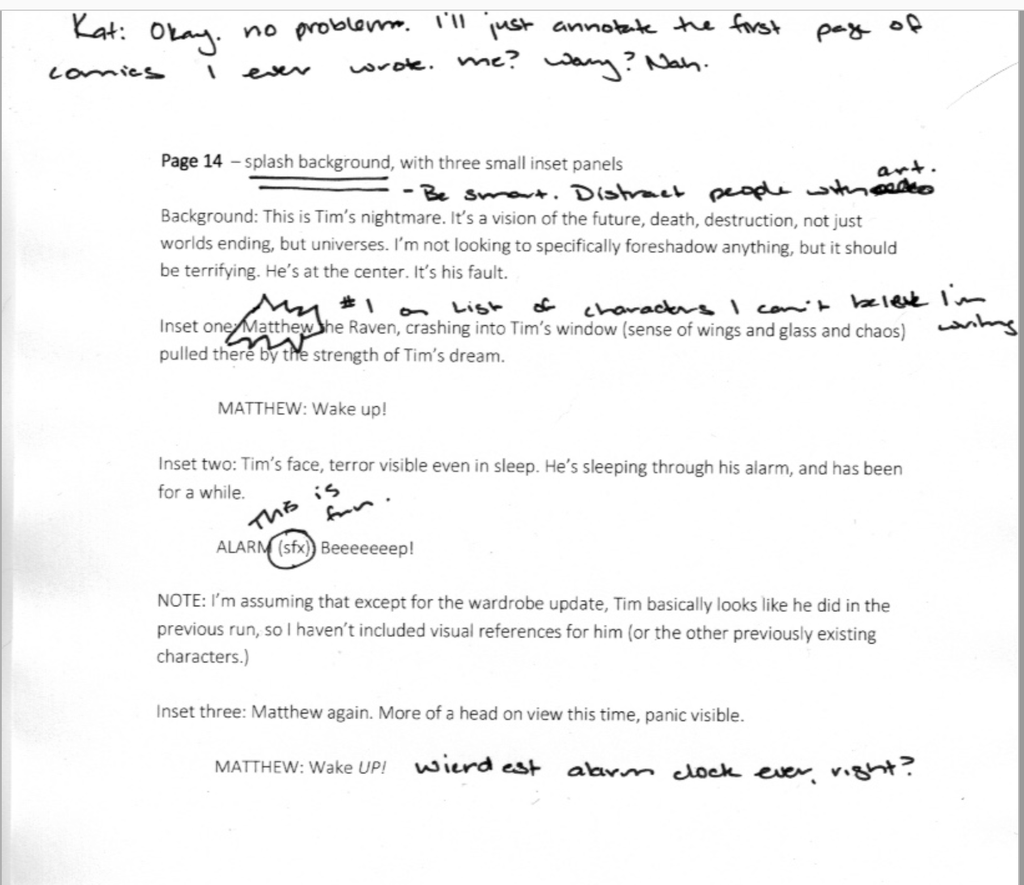 Kat is pretty excited to bring it to us:

KH: It really actually is. My pitch for the project was a narrative pitch, not a script, and I’d done an outline of what I thought the story arc might be, but this is literally my first script page. No pressure, right?

BR: Did you read the original Books of Magic? Tell us a little bit about how you came into this existing world to take over a beloved story but also make it your own (acknowledging this is a new Tim Hunter). How much did you each talk to Neil? Any of the artists? Bolton? Gross? Vess?

KH: I had read Neil’s original run, which makes it both fun and a bit intimidating to step into the story. I really liked Tim from the first time I read the series. I still like him, and so I feel bad about some of the [SPOILERS] that are going to happen. I’ve spoken to Neil a bit about things—there was a story meeting in New Orleans where all the writers were able to talk things through with him—and he’s been great about answering questions.

BR: I have to ask: what’s so funny about the alarm clock?

KH: Probably just my bad handwriting! I was trying to indicate that it was fun getting to write special effects (sfx) in a script.

BR: Tell us a little bit about the decision to have Tim as a new incarnation with the exact same look.

BR: Did you and Tom know one another before you teamed up for Books of Magic?  How did you establish your team dynamic? Did you work together or did Kat send him completed scripts and he sent back the art?

KH: We didn’t know each other previously. So I first met Tom through his art, which is absolutely spectacular. He’s such a great visual storyteller. I write the script before it’s sent to Tom, but that makes it sound much more one-way than it is—he brings things to life on the page, making the story clearer and stronger. So I would say it’s very much a collaboration.

BR: Are you planning to bring back over story elements besides Tim’s look and his connection to magic?

KH: One of the things I loved about the original run was that Tim went to so many different places—different worlds, different times. So we’ll definitely be taking advantage of that freedom in the story. And it’s quite possible you’ll see other characters that you recognize.

BR: How often do you talk to the other Sandman Universe writers and artists? I imagine there’s a lot involved in crafting individual books that can viably exist in a shared world.

KH: Well, it’s a shared world, yes, but it’s more like our stories live in different cities, rather than down the street from each other. So at least as of right now, it’s more independent and conversations are more like “Aaahh, that art you posted is so gorgeous!” or “Nalo, you rocked your SDCC looks!” rather than story planning—for now.

BR: Any chance we’ll get a new version of that panel with Tim, John Constantine, and the Spectre? (referenced above)

KH: That is a gorgeous one, isn’t it?