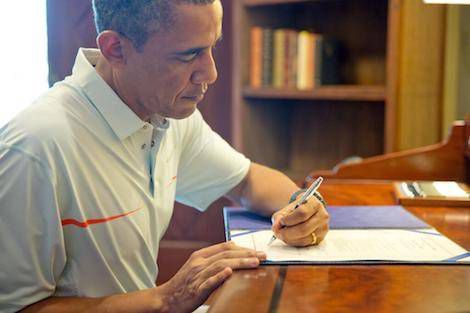 As the departure of the United States’ 44th President draws year, many of us lament. From Barack’s dad jeans and Thanksgiving puns to Michelle’s dynamite gowns and inspiring arms, the first black First Family will be sorely missed. But let us not despair of what we lose, but rejoice in what we could gain! With a sudden wealth of free time, think of the books the Obamas could write. Seriously. Think about them:

The Audacity of Nope: Dealing with an Obstructionist Congress by Barack Obama

My Anger Translator and Me: True Confessions of Keeping My Composure by Barack Obama

I Look Pretty Good Now, Don’t I: A Memoir by Barack Obama

The High Road by Michelle Obama

A House Built By Slaves: The History of Slavery and Our Nation’s Capital by Michelle Obama

A History of Kenya by Barack Obama (With the dedication: For Donald)

First Closet, a photograph book by Michelle Obama, with essays from fashion experts and Michelle herself

Barry and Joe: The World’s Best Buddies, a picture book by Barack Obama and Joe Biden

Who Run The World by Michelle Obama (intro by Beyonce)

Kids in the Oval: Photos of My Favorite Constituents by Barack Obama

Thanks, Obama! by Sasha and Malia Obama