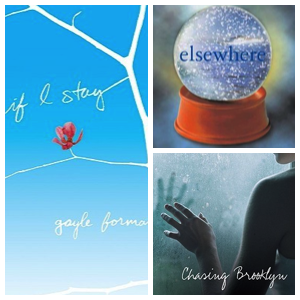 With the film based on Gayle Forman’s bestselling If I Stay hitting theaters, it’s the perfect time for another edition of Beyond the Bestsellers.

If you’re looking to expand your YA reading horizons, here’s a look at why you like Forman’s novel, as well as a handful of recommended books to read that capture some of those elements that aren’t on the bestsellers list.

As always, nothing will ever be the next If I Stay because we already have that book and your mileage may vary. But the chances of finding a new favorite or two based on the key elements that made If I Stay work for you are pretty good.

Like Forman’s novel, all of these suggestions tend more literary. The language play and the imagery used throughout are noteworthy. Of course, if you’ve read If I Stay and haven’t read the sequel, Where She Went, then start there.

Liz’s life is cut short when she’s killed in a hit-and-run accident. Now in Elsewhere, the place where she’s existing after her life on Earth, she’s aging backwards: starting at her age of death, she is heading toward her infancy. When she is a baby again, she’ll be able to return to Earth.

But Liz doesn’t want this. She is angry, upset, and unable to believe she’ll never do the things her friends on Earth get to do, like go to college or graduate high school.

How can she let go of the life she’s no longer living and learn to embrace the one she’s got in Elsewhere? This story about the afterlife and about those “what if” questions should strike many chords with fans of Forman’s book.

The Everafter by Amy Huntley

When 17-year-old Madison wakes up, nothing is as she remembers is. That’s because she’s died. She’s no longer living in the life she once knew.

Madison has no recollection of how she died. It doesn’t make sense to her.  But she begins to see these glowing objects around her — a bracelet, a t-shirt, keys, a sweatshirt — and they’re all familiar to her since they’re all items that belonged to her that she’d lost at some point. When she imagines putting on or using the items, Madison’s taken back to a moment in her life, and through those moments, she starts to construct the story of what happened and how she died.

Like Forman’s novel, The Everafter plays in the spaces between life and whatever happens after death. The look at relationships in Huntley’s novel should be particularly appealing to those who loved that element of If I Stay.

We’ve seen the story from the perspective of the person who has died, but what about the “what if” questions that pulse for those who are still alive?

Brooklyn’s boyfriend, Lucca, was killed in a car wreck, and just a year later, Gabe — who was driving the car — kills himself. It’s not long before Gabe begins haunting Brooklyn in her dreams while at the same time, Lucca begins haunting the dreams of his older brother. What is it that’s making them show up? Why is it they’re being demanding of those people whose lives they’re no longer a physical part of?

This should appeal to Forman fans for the emotional resonance and exploration of the afterlife in a unique manner, and the novel-in-verse format is a bonus surprise. If you like Chasing Brooklyn, then Schroeder’s  I Heart You, You Haunt Me is an excellent next read and another solid choice for Forman fans.

Three more next reads for Forman’s If I Stay include: