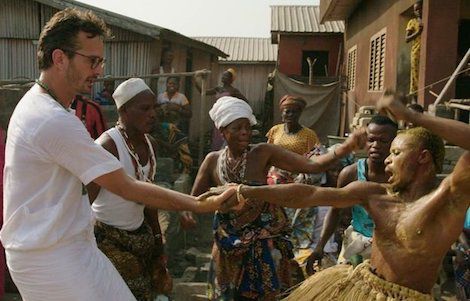 In the show, New Zealand journalist David Farrier visits an array of peculiar or dangerous places around the world to see what he can learn. Most people who participate in “dark tourism” travel to places that have, historically, been connected to tragedy, death, or other dark topics.

The books on this list—a range of fiction, nonfiction, and memoir—are roughly connected to specific episodes of the show, but since many of the places visited on the show haven’t been written about extensively, I’ve taken some liberties. All episode descriptions have been copied from Netflix.

“David meets Pablo Escobar’s enforcer in Colombia. Later, he witnesses an exorcism in Mexico and participates in a faux illegal border crossing.”

The Sound of Things Falling by Juan Gabriel Vásquez (translated by Anne McLean): A young professor witnesses the murder of a close friend outside a billiard hall. The investigation into his death leads to an exploration of the legacy of violence and wealth in Colombia thanks to the drug trade.

Killing Pablo by Mark Bowden: An investigation into the violent rise and fall of Pablo Escobar and the Medellin cartel. This book reveals details of the sixteen-month manhunt led by the United States to end Escobar’s reign of terror.

“David visits a town hit by heavy radiation, hikes through a supposedly haunted forest and explores an abandoned island with its former residents.”

Close Your Eyes, Hold Hands by Chris Bohjalian: Six months after a nuclear plant in Vermont has a cataclysmic meltdown, teenager Emily Shepard is homeless, an orphan, and in hiding. The book follows her journey in the aftermath trying to figure out what comes next.

Imagine Wanting Only This by Kristen Radtke: After the sudden death of her uncle, Kristen Radtke became obsessed with understanding ruins and the places left behind. In this graphic memoir, she explores deserted cities, the human heart, and places in between.

11/22/63: A Novel by Stephen King: In this door-stopper of a book, a high school English teacher discovers he can travel back in time via a portal in a diner storeroom. The portal takes him back to a moment where he could prevent the Kennedy assassination…but of course things are not as simple as that.

The Vampire: A New History by Nick Groom (October 30 from Yale University Press): This detailed account illuminates the complex history of the iconic vampire, from the first prominent discussions in the eighteenth century to our artistic and sociopolitical perspectives today.

“In Kazakhstan, David and a fellow dark tourist swim in a lake formed by a nuclear blast. Later, David’s trip to Turkmenistan doesn’t go as planned.”

Space Race by Deborah Cadbury: The story of the race to space between two major superpowers is a great one, featuring “courage, duplicity, political paranoia, astonishing technological feats, and unbelievable triumphs in the face of overwhelming adversity.” This book follows the two men heading the competing programs —Wernher von Braun and Sergei Korolev—and the result of their rivalry.

Full Body Burden by Kristen Iversen: This book is a story of growing up in a small Colorado town, close to a secret nuclear weapons plant. It’s also an investigation into the government’s attempts to conceal the toxic effects of the facility and the impact on the kids and families who lived nearby.

“After participating in a World War II reenactment, David visits a disturbing museum. He then travels to Cyprus in hopes of seeing a forbidden city.”

The Book of M by Peng Shepherd: In a dystopic near future, people start losing their shadows and all of their memories. As the Forgetting spreads, cities are abandoned, societies break down, and individuals begin to risk everything to save the people they love.

Man of War by Charlie Schroeder: After realizing he knew very little about history, an actor decides to spend a year participating in war reenactments and then writing about the experience.

“In Cambodia, David is offered the chance to shoot a cow. Later, he tours Myanmar before witnessing the cleaning of a mummified corpse in Indonesia.”

The Milk Lady of Bangalore by Shoba Narayan: After years in New York, Shoba Narayan and her husband decide to move back to India to raise their daughters. Soon, Narayan develops a relationship with the woman who sells fresh cow’s milk across the street, Sarala. They become friends, of a sort, and the relationship leads Narayan to explore the role milk and cows play in Indian culture.

Letters from Burma by Aung San Suu Kyi: This 2010 book is a collection of letters by Nobel Peace Prize winner Aung San Suu Kyi that “reaches out beyond Burma’s borders to paint for her readers a vivid and poignant picture of her native land.”

“David attends a voodoo festival in Benin, visits an infamous area of Johannesburg and speaks with white South African separatists.”

Born a Crime by Trevor Noah: In this memoir, comedian Trevor Noah writes about growing up as a mixed-race kid during the end of apartheid in South Africa and his relationship with this resourceful and stubborn mother. This one is great as an audiobook.

We Are Not Such Things by Justine van der Leun: In 1993, a 26-year-old American woman was murdered by a mob outside of Cape Town. As she began her research to bring this story to an American audience, Justine van der Leun’s investigation began to unravel the commonly accepted narrative about this incident and its place in a story about contemporary South Africa.

Episode 8: Back in the USA

“Charles Manson’s pen pal gets confrontational in an interview. Also, David prepares for the end of the world and visits an extreme haunted house.”

Does Jesus Really Love Me? by Jeffrey Chu: Jeffrey Chu is a gay man and a Christian who spent a year trying to understand the intersection of faith, politics and sexuality in Christian America.