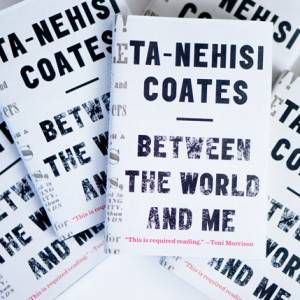 There are some books that demand a higher level of consciousness. These books become more than ink and paper and glue, serving as revelations as heavy as iron lungs, a call to the soul to remind you that you are more than a physical body. For the reader, the writer’s voice clears the grey film of passivity, the fog of unquestioned compliance. These writers posses the gift of commanding literature as both a form of self-expression and public service.

As you know, I’ve always searched for answers in novels, a glutton for words, skilled at dipping in and out of the realities of fictional prophets and friends. I bought Between the World and Me by Ta-Nehisi Coates, curious and hopeful about the new work from the Atlantic writer that Toni Morrison practically called the second coming of James Baldwin. She praised Coates and admitted, “I’ve been wondering who might fill the intellectual void that plagued me after James Baldwin died. Clearly it is Ta-Nehisi Coates.”

Clocking in at 176 pages, the book argues and outlines how the state and treatment of the black body in America is a direct reflection of white supremacy. You have been taught in school, the very same school system that I attended and abhorred, that slavery was an American blunder that effortlessly collapsed in on itself when Lincoln issued the Emancipation Proclamation. You have been taught that the Civil Rights Movement was contained to a very specific moment of history, that it was only necessary for this period of social and cultural unrest, that it fixed the problem of discrimination and racism. It takes considerable, back-breaking effort to unwind the ties of an accepted legacy, to undo an insidiousness that is regarded as the American Way of life. You and I were taught that the historical narrative of black people started with slavery, that they were slaves before they were categorized as human. Coates writes, “Here is what I would like for you to know: In America, it is traditional to destroy the black body—it is heritage.”

I suppose our experiences with race and racial identity will never be exactly the same, down to the last precise detail. The female black body and the male black body are subjected to different sets of criteria, one viewed as a vessel, an oddity to be simultaneously repulsed by and fascinated with, a body that functions as property, as a battleground, as a reservoir for collective trauma and psychic pain. We have seen that police brutality not only impacts young men, but young women, notably Sandra Bland in Texas. New names flowing down Twitter feeds like a tree shedding an endless supply of leaves.

We did not grow up in Chicago’s South Side or Ferguson or even New York, but we were still outsiders in a monolithic community. Perhaps we did not experience the same intensity of fear that Coates experienced while growing up in Baltimore. But that does not mean our experiences are not authentic, that they do not tell some uncomfortable truth about the way white people view us. One could argue that we even benefit from colorism, but we are certainly not white passing. White people have always made that clear. It’s easier to realize this when your town is run by white people and everywhere you go there seems to be only white faces. We grew up as the only black family on our street. People always asking “what are you?” and “where are you really from?” like we were tricksters, knowledgeable spies with exotic secrets stuck to the back of our throats.

In elementary school, a boy on my bus told a “joke” that involved equating the color of black people’s skin to shit. Naturally, he amplified his voice to ensure that I would hear. It happened so many years ago and I haven’t seen that white boy in years, but I can’t unremember it, can’t forget. Because behind all of the liberal facade of our Connecticut town, this is what I think is really lurking behind those polite smiles and curious stares: the belief that black and brown people are lesser, beneath them, burdens. As you get older, you notice that people stop calling you slurs and allow their behavior to do the talking. They pretend you are invisible. They pretend you are a thug. They pretend you are some scary, unstoppable force with Hulk rage. They equate you to food and fantasy, reduce you for oblivious consumption. They put their hands in your hair. People figured out the right words to maim us, but you were the one who actually raised a fist and fought back. You, the boy who strangers believed to be shy, the boy adults wrote off as reserved and introverted, who decided that what he did not say was what best defines him.

You have to remember that America’s fetish for anti-black violence is not proof of the criminality that White America claims belong to black people. Our grandfather escaped an abusive home in North Carolina and like some scene out of Catch Me If You Can, he forged papers and enlisted in the Navy at sixteen. He made a comfortable life for his family, despite never having graduated high school. Our father is kind and tenderhearted and though far from perfect, but he was always present in our lives. He was aware of the stereotype of black families having broken homes. Our home eventually broke, fractured and splintered, but he tried.

As you prepare for college, I want you to read this book. Take it with you when you leave, absorb the words until they become as familiar as the Catholic prayers our mother made us memorize, clutch it close to your heart, keep it safe and remember me. The book may disturb you or anger you or make you sad. These are natural reactions to watching a skilled writer dismantle and blow up the concept of the Dream, to rip off the masks of colorblind equality. But the book should not discourage you from claiming the prosperity that you deserve, that is rightfully yours. The book should provide some comfort that we are not alone, that the isolation of WASP-infested suburbs cannot take away your fire.

The book may not have all the answers, brother, but it can keep you afloat.