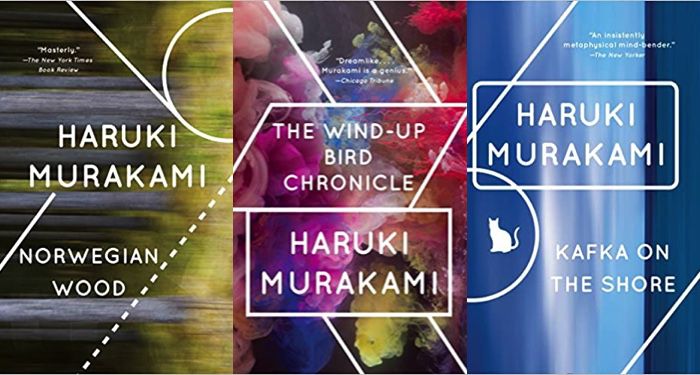 I still remember the first time I heard of Haruki Murakami. I was hanging out at a friend’s apartment when I happened to see her roommate’s bookshelf. Nearly as tall as the ceiling, it stretched across a bedroom wall and was crammed with great titles. I was instantly jealous.

After the roommate and I talked about mutual book loves for a while, she suggested I try this writer named Haruki Murakami and handed me a copy of The Wind-Up Bird Chronicle. She didn’t usually loan out her books but said she could tell I understood their importance. She knew I would return it.

Dear Rioters, I did not.

First, I’d like to offer an excuse: Months went by before I had time to read it. I was in my mid-20s and working far more than 40 hours a week at a newspaper while enjoying a social life I didn’t usually have. By the time I did read it, the roommate had moved to a new city.

But the truth is: I wouldn’t have returned it even if she had lived down the block.

The Wind-Up Bird Chronicle enthralled me. Those scenes with Toru contemplating life, death, and sex in the bottom of the well? I can’t forget them. When he closed his eyes, I could feel the well around me. Its darkness. Its smell. The book felt like a lived experience. There was no way I could return it. (If you’re reading this, Christine, I owe you a book.)

Soon, I looked up Murakami’s other works. I read Norwegian Wood, then Kafka on the Shore, then everything that was available. Whenever Murakami finished a new novel, I was on the prowl for it.

Somewhere along the way, it dawned on me that these books were Japanese translations, and I hadn’t read any other Japanese writers. I was chagrined to realize I’d mostly been sticking to American and British writers, mirroring the habits I’d developed (and been handed) while in my very white, very patriarchal high school. I decided to change that.

One of the first translated books I found was Kōbō Abe’s The Woman in the Dunes. In hindsight, I can see why I was so attracted to the book. It’s the story of a man who becomes imprisoned in a house at the bottom of a dune with a woman he doesn’t know. (Another type of well, clearly.) Each day, the couple must dig out the shifting sands that threaten to bury them and the house, a metaphor on life. The novel struck me as profoundly original. I’d been missing out by reading only Western writers.

From there, I read other Japanese writers like Kenzaburō Ōe, Nip the Buds, Shoot the Kids, and Shōhei Ōoka, Fire on the Plains. The novels echo some of Murakami’s darkest writing about war; in particular, for readers of The Wind-Up Bird Chronicle, Lieutenant Mamiya’s horrific experiences along the Russian border may spring to mind. Ōe and Ōoka’s novels are grim, almost hallucinogenic reminders of what war costs.

If you’re looking for novels that delve into some of Murakami’s lighter moods, you might try Banana Yoshimoto’s Kitchen and Hiromi Kawakami’s The Briefcase. Neither are tales of merriment, but Murakami readers will enjoy the unconventional way characters form strong relationships.

And for readers who want that strange sense of wonder Murakami is so well known for? You couldn’t ask for better than Yōko Ogawa. Ogawa’s latest translation, The Memory Police, is a dystopian tale about objects disappearing—and the townspeople forgetting they ever existed. It’s a fascinating novel about to be made into a movie.

In Korean writing, Hye-Young Pyun (The Hole), and Han Kang (The Vegetarian) will satisfy a Murakami reader’s craving for macabre twists of fate.

As you might have guessed by now, I didn’t stop with East Asian fiction. Since realizing my love for translated fiction, I’ve delved into South American writers like César Aira and Roberto Bolaño. I’ve read Portugal’s José Saramago, Magda Szabó’s The Door, and I’m promising myself I’ll get to Olga Tokarczuk’s works soon. Translated books are just too good to miss.

But my love of translated fiction could use some company. According to Three Percent, which is part of the University of Rochester’s translation program, just three percent of all books published in the United States are works in translation, and of that only 0.7% are fiction and poetry. That means somewhere between 400 and 600 books a year are translated.

Perhaps you’d care to join me in my reading quest? Even at such low numbers, there are more than I can read in a year. Still, I plan to tackle as many as possible, including, of course, whatever Murakami writes next.

If you’re looking for more great ideas on translated fiction, check out 2020 New Releases in Translation: Everything You May Have Missed or 2021’s Read Harder Challenge: A Non-European Novel in Translation.