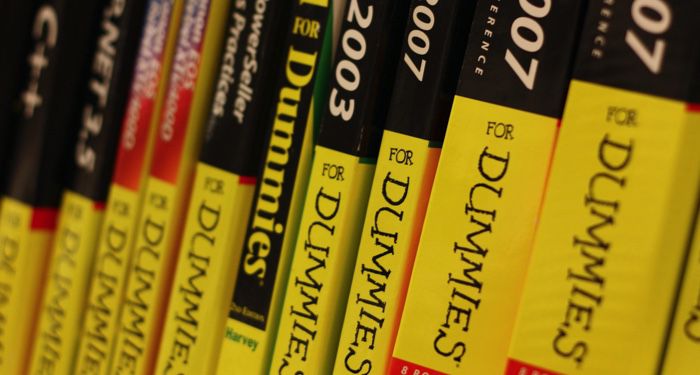 Browsing a bookstore in the mid-’90s, a particular black and yellow spine really stood out in the stacks. The striking colors caught the eye, making the browser wonder what this book for dummies could teach them.

The For Dummies books really found popularity during the height of the dot-com bubble halfway through the decade. Laypeople with no knowledge of computer technology were seeking out easily-digestible information about software, coding, and operating systems. While working for Bantam Doubleday Dell publishers in New York, IDG Books co-founder and CEO John Kilcullen overheard a computer software store customer lamenting his need for an easy-to-follow book about computers. Unknowingly titling their very first book, this customer said he was looking for “Something like DOS for Dummies”, and hence an entire series was born. Published by Kilcullen’s IDG Books, DOS for Dummies was written by Dan Gookin. His writing in DOS went on to inform the voice of the entire series, incorporating humor into these books designed to engage and educated novices. He would go on to write seven more books for the Dummies franchise, his last one to-date titled Android Tablets For Dummies. The first printing of DOS for Dummies was only 7,500 copies, giving no indication of what was to come for the series.

When DOS gave way to Microsoft Windows, author Andy Rathbone released Windows for Dummies, a title that would go on to sell more than 15 million copies, propelling it into the best-selling computer book of all time. Completely unrelated trivia that I couldn’t help but share: The character Mark “The Rat” Ratner in Fast Times at Ridgemont High is based on Rathbone. During Cameron Crowe’s research for the original book at Clairemont High School in San Diego, Rathbone and Crowe became friends. Rathbone would go on to publish 50 computer books.

The Dummies series employed a winning formula: simple language and bold icons called attention to important pieces of information. The sections organized into “parts” grouped related chapters together. And the work of comic Rich Tennant was incorporated throughout to bring a little levity to the subject matter. At the end of each book, a section called “The Parts of Tens” would provide a list of ten items. These items would give further resources or interesting information not included in the rest of the book.

The series, while initially focused on things like creating webpages and writing HTML, decided in 1994 to branch out into more general interest topics. The first non-technology related book in the Dummies series was titled Personal Finance For Dummies (and it remains the number one consumer title). Selling more than half a million copies, IDG realized it had a winner on its hands.  They would go on to publish such titles as Football For Dummies, Fitness For Dummies, and Etiquette For Dummies, just to name a few. Some were more popular than others. Sex for Dummies, a hugely popular title written by the famous Dr. Ruth Westheimer, was published in September 1995 to some pearl-clutching and couch-fainting.  The more esoteric titles didn’t have quite the same sales numbers.

The Dummies series spawned a whole industry of books directed at the less-than-knowledgeable reader. While Dummies remained the gold standard, The Complete Idiot’s Guide from Alpha Books became a decent competitor (in fact, I’m pretty sure somewhere in this house is a copy of The Complete Idiot’s Guide to Fishing. I have no idea why). Other series such as FabJob (how-to books for starting a business or career) and Teach Yourself (published by Hodder Headline) followed suit. Current publisher John Wiley & Sons insists that they are unbothered by the competition, that there is room for all simplified reference books.

In Spring 2016, the Dummies series received a makeover. The dated cover art and typeface have made way for a slightly more sophisticated aesthetic. Tennant’s comic interludes were abandoned in 2012. These changes were clearly in an effort to gain the notice of readers in an environment where our attention is constantly divided.  And how are they faring in a time when questions can be asked and answered within seconds? That remains to be seen. However, a quick browse on a subreddit page about the series leads me to believe that readers haven’t given up their beloved paper how-to books so easily. Many posters discuss the usefulness of Guitars for Dummies or Magic for Dummies as something that, to this day, provide them with valuable, easy-to-reference information. And I’m sure it comes down to the topic. If you were to search for something like “Catholicism”, your Google results page would be met with both valid information, uninformed opinions, and conspiracies. And how does one wade through that conflicting information as someone entirely new to the topic? Is a book that is instructional and accessible a better format for a subject so fraught?

The popular Dummies series would go on to see 200 million copies in approximately 2,500 titles translated into more than a dozen languages. It allowed readers more comfort in admitting they were ignorant on a topic and invited them to learn more. It was the gateway for information that employed no gatekeeper. The Dummies books were one of the precursors to having information at your fingertips. They may have spent the ’90s and aughts being the brunt of sitcom jokes, but to the general public, they opened a door to a world of information.