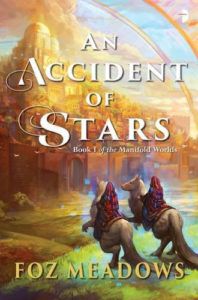 In an a time of rampant misinformation and popular conspiracy theories, we could all use a little rational armor for our brains. I wish I could say this list was in honor of the State of the Union address, but that wasn’t even on my mind when I was cooking it up. Rather, the rampant damage caused by [willful] bad thinking has been on my mind thanks to the newest kerfuffle in the science-fiction and fantasy literary community, in which bad faith actors have been attempting to dox and harass writer Foz Meadows’s husband. You may know Foz Meadows as the author of An Accident of Stars—or if you didn’t, now you do. (Full disclosure: Foz and I are both published by Angry Robot.)

While I can’t say these books make great weapons (beyond, say, throwing them), they’re excellent armor against the frustration of arguing with conspiracy nonsense—or falling to that kind of thinking, yourself.

Suspicious Minds: Why We Believe Conspiracy Theories by Rob Brotherton

This book focuses on the psychology of conspiracy thinking, which isn’t as aberrant as we’d like to believe. It’s actually a predictable result of how the human brain works, which makes it all the more seductive. The call is coming from inside the house. 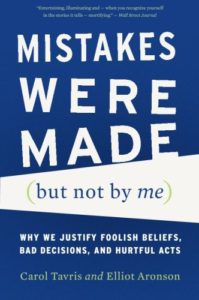 Mistakes Were Made (but Not by Me): Why We Justify Foolish Beliefs, Bad Decisions, and Hurtful Acts by Carol Tavris and Elliot Aronson

One of the most frustrating aspects of arguing with someone who is just plain objectively wrong is that they’ll often double down on their position, becoming more entrenched in it the more you argue. This book provides an explanation as to why…which doesn’t necessarily help you convince a conspiracy theorist who has dug in their heels, but it might help you take a step back and move on with your life.

Bullspotting: Finding Facts in the Age of Misinformation by Loren Collins

This book focuses on the rhetorical techniques used by people spreading misinformation, laying them out in a friendly and readable way. Considering that misinformation campaigns are rapidly becoming the bread and butter of certain political sectors, it’s a useful resource to have.

Logic and Contemporary Rhetoric: The Use of Reason in Everyday Life (13th Edition) by Nancy M. Cavender,‎ Howard Kahane, and Frank Boardman

Yes, an actual honest-to-goodness textbook that gets used in college classrooms, but don’t be intimidated. It’s chock full of examples and has a clear, friendly style when it comes to talking about rhetoric. 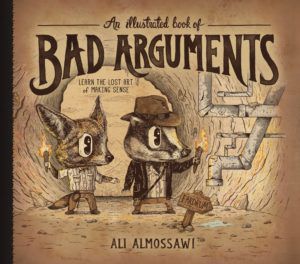 An Illustrated Book of Bad Arguments by Ali Almossawi, illustrated by Alejandro Giraldo

This book summarizes a lot of information about logical fallacies and just plain bad arguments…with pictures. Really cute, funny pictures. If you’re not quite up to throwing yourself into the wall of a textbook, give this one a whirl. It helps to recognize by names the bad arguments people will try to pull on you.

Denying the Holocaust: The Growing Assault on Truth and Memory by Deborah E. Lipstadt

While not precisely on the more general topic of bad thinking and bad arguments, it’s important to highlight one of the most hurtful, evil occurrences of conspiracy thinking that runs rampant in the modern world.

(You’ll note that this book list is much whiter and more male than we normally prefer to have on Book Riot. I can only apologize for that; the skeptic movement as a whole trends very white and pretty darn male, which is the topic of much internal discussion by those who see it as the problem it is. For the particular topic of scientific skepticism that I wanted to hit—namely, conspiracy theory thinking—with this book list, the options become even more limited.)