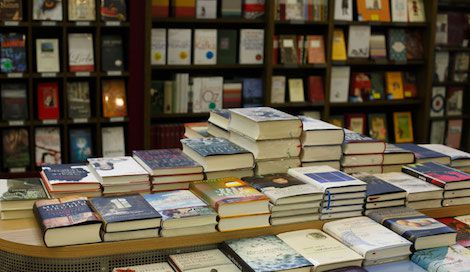 Sponsored by Girl Boner: The Good Girl’s Guide to Sexual Empowerment by August McLaughlin, a book on sexual joy, wellness, and empowerment.

According to PwC’s Global Entertainment & Media Outlook 2018–2022, the consumer market for physical, printed books is holding its own in an increasingly digital world (see “Print Presses On”). Between 2018 and 2022, sales of physical video games, home video, and music are expected to decline each year, in some instances by double-digit percentages. By contrast, sales of physical books are expected to grow modestly, by about 1 percent annually, every year. By 2022, PwC expects consumers around the world will spend US$50.3 billion on books in physical or audio (i.e., non-electronic) form, compared with $47.8 billion in 2017. In May, the Association of American Publishers (AAP) reported that in the U.S., print books, especially hardbacks, remain a source of growth for the association’s nearly 1,200 publishers. AAP’s Monthly StatShot revealed that revenues for trade (consumer) books increased by $96 million (1.3 percent), to $7.6 billion, from 2016 to 2017. The growth was attributed to a 3 percent revenue increase in the adult books category, which accounts for more than 65 percent of all revenue for trade books.

All of those writers who foretold the death of the print book because of ebooks have egg on their faces now.

My next book: #PARKLAND. Just announced by @HarperCollins today. Racing to finish writing! This is going to be short, and fast: out in February! AP story in New York Times: https://t.co/ccWQtrdsUH pic.twitter.com/QYF1blgEEH

I’m really looking forward to this (as much as one can look forward to a book about a horrifying school shooting).

She’d given up on the movies. Author Karin Slaughter may have seemed an ideal fit for adaptations, given the addictive nature and sheer popularity of her work, which has sold more than 35 million copies worldwide. But for 17 years, she was told her novels were “too female-centric” by producers and execs, and eventually she stopped trying to get them on screen. “I was just so disillusioned,” she says.

Then, as if with a snap of the fingers, everything changed.

Funny how when Hollywood realized there’s a market for stories featuring women, they were able to snap up so many thrillers to adapt by women.