Discussing sex work and feminism in the same sentence can mean inviting controversy, but it’s an issue that’s been playing on my mind a lot for the past few years. Academically, the field of sex work research is growing and is dominated by women’s voices – many of them white women, but that’s an improvement on the overall story of sex work being told by men. In fictional media for many years, sex workers have been mere objects in our stories – damsels in distress, cold corpses in dark sheds, reduced to being just low risk victims for serial killers seeking release.

The story of sex work is often interlaced with that of human trafficking, exploitation and abuse. The people who choose to work in the sex trade rarely have their voices heard and are less visible in the mainstream media. In the past few years, this gap has been addressed with some extremely thought provoking publications on the topic of sex work, some of which are discussed below.

I preface this by saying that the books featured in this article are included precisely because they are authored by those who actively chose sex work, or are actively involved in its objective study as part of labour rights movements. Stories of neglect, abuse and exploitation belong on a different book list, and I am not trying to equate the two, or to erase any viewpoints. The books below are often collections and feature the voices of people of colour, trans people, and gender nonbinary individuals. As scopes go, writing on this topic in the past few years has increased its breadth of representation with some diligence.

Dr Brooke Magnanti was once upon a time also known as Belle de Jour, the name by which she produced her first books as the Diary of a London Call Girl. Magnanti was a worker in the UK and her story was turned into a TV series. Magnanti worked as a call girl while completing her doctoral studies in the UK in the early 2000s and over a decade later, has written this research driven consideration of public perceptions of sex and public policy. This is an examination which flies directly in the face of mass media coverage. 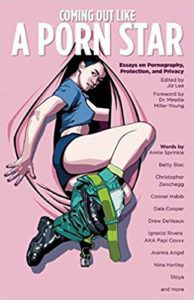 The Amazon reviews on this are worth a read – chock full of sex workers lauding it for its smart advice, support and encouragement. On top of that, many of the comments are from people who clearly see this as a career and wish to build their business with solid advice. Given how old the industry is, a book that gives tips and tricks should be lauded for its potential to keep workers safe, especially in a high risk profession. As a person who isn’t a sex worker, I found this book gave me insight that I had previously lacked, and definitely gave me a stronger understanding of the realities of a trade that isn’t failing any time soon. 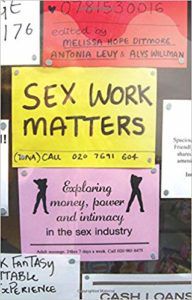 This one covers all angles, and includes discussion around male and trans sex workers, with contributions from activists, workers and academics on issues around intimate relationships, money and harassment in the industry. This is worth picking up if you wish to see insight into the more personal side of juggling sex work with other life commitments and realities. This was an eye opener for me, and showed me a lot about my own unconscious bias and presumptions.

This is brand new to the deck of possible reading options on this topic, and so addresses some very contemporary issues around migration, white supremacy, and modern labour rights. The book questions the place of sex worker rights in the broader political atmosphere and where sex workers belong in conversations about feminism. It directly addresses the idea that you have to be anti-prostitution to support sex workers, which is the point of view I found most interesting here. This one is important – even if you find yourself disagreeing with it.