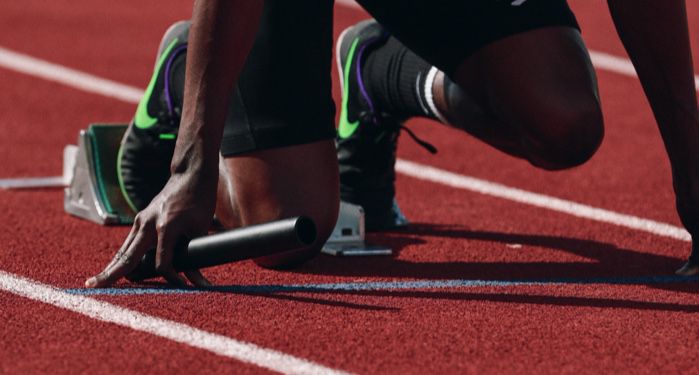 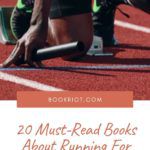 Running, according to everyone from top coaches to Garfield, is mostly a mental game. Whether you’re a repeat marathoner looking to increase your understanding of the science behind optimum racing, or just getting started and looking for some basic plans and recipes to help you stay injury free, the books below offer a collection of inspiration, humor, and experience to keep you on the road (or trails, track, or treadmill)! 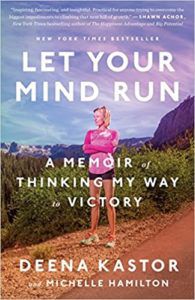 Let Your Mind Run: A Memoir of Thinking My Way to Victory by Deena Kastor

Can you think your way to a better time? Olympian Deena Kastor explores the power of positive thinking in a book that spans her running career from high school racing to training at altitude with legend Joe Vigil. After several setbacks, Kastor began to investigate the ability of her thoughts to shape her running and shares what she’s learned in this uplifting book filled with actionable advice.

Running with the Buffaloes: A Season Inside With Mark Wetmore, Adam Goucher, And The University Of Colorado Men’s Cross Country Team by Chris Lear

Under the successful—and controversial—coaching of Mark Wetmore, the University of Colorado’s cross country team has become a NCAA powerhouse. Lear was given up close access to the team and the practices, meets, and routines that make up their winning season and recounts what he discovers about what drives student-athletes to championships.

Born to Run: A Hidden Tribe, Superathletes, and the Greatest Race the World has Never Seen by Christopher McDougall

Spanning from the Cooper Canyons of Mexico to the research labs of Harvard, McDougall explores the ability of the Tarahumara Indians to run long distances without injury. Exploring the history of the tribe, their fight as an indigenous people in Mexico, and the ultra race that brings runners from around the world to the Cooper Canyons, this book connects the science and culture of running in a unique and little known setting.

Using running to explore his family’s history of migration and his own experiences in a society that dismisses and threatens his existence, Álvarez takes readers on a journey through the land of his memories, exploring the physical and emotional factors that drive us to run and how the act of movement connects us to the future. 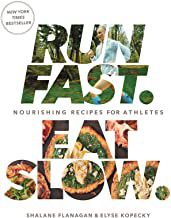 Trying to find the perfect pre-run snack or post-run meal? From homemade pizza to granola bars and veggie packed salads, this book will have something for you. By combining their expertise in nutrition and running, Flanagan and Kopecky have created a cookbook that will help runners, and anyone looking to eat well, support their training with what they eat.

Once a Runner: A Novel by John L. Parker Jr.

A novel inspired by the author’s own experiences as a collegiate athlete, this is the story of Quenton Cassidy: a track star and student caught up in the Vietnam-era protests that rile his school. After a suspension from the track team, he gives up everything he knows to retreat and turn his sole focus to winning. Considered the quintessential running novel, runners will recognize their own choices and dilemmas in the story and will be inspired by the revelations of Cassidy as he commits to his goals.

A Beautiful Work in Progress by Mirna Valerio

Mirna Valerio is used to standing out on the running trails, where she works to disrupt the stereotype of the skinny, white runner through body-positivity and a commitment to finishing the race. Combining honestly, laughs, adventures, and frank discussions of the dominant culture of the running world, Valerio will inspire you to lace up your shoes and hit the road.

The science of what the body can endure is explored from every angle in this book. Hutchinson looks at mental stamina, oxygen depletion, and hydration, among other facets of training, to discuss the science of running and winning. By studying what it means to push the human body to the limit, Hutchinson provides runners with both useful and academic information for their own training.

Switzer was the first woman to officially run the Boston Marathon, dodging race directors and angry spectators who tried to force her off course to finish. In 2017, she ran the race again, at the age of 70, as another accomplishment in a lifetime of advocating for women in sports. Recounting her groundbreaking achievements and her work to support female athletes, she shares the story of both of her marathon triumphs in this groundbreaking portrait of a pioneer in women’s running. 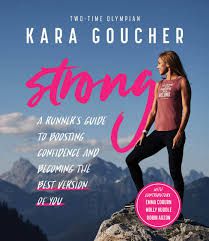 Strong: A Runner’s Guide to Boosting Confidence and Becoming the Best Version of You by Kara Goucher

Sharing what she’s learned from her Olympic appearances and her longtime, running career, Goucher invites leaders in the world of sports psychology to share their secrets for helping athletes become both physically and mentally stronger.

A major concern of runners, especially distance runners, is avoiding injury. Jeff Galloway developed his run-walk-run method of marathon training to support runners looking for a lower impact training plan that still allows them to get in marathon running shape. Including sample plans based on goal times, workouts to incorporate in your training, and answers to common problems, this is a great guide for runners who want to tackle the marathon in a balanced way.

26 Marathons: What I Learned About Faith, Identity, Running, and Life from My Marathon Career by Meb Keflezighi

Meb Keflezighi is an Olympian, Boston marathon winner, and all-around legend in the running world. Over the course of 26 marathons, he has learned some important lessons about overcoming challenges and dealing with the unexpected, and in this book he takes readers along on each of these races. Learn about his training, how he’s inspired by his faith, and what his best and worst racing moments were in this memoir of an incredible career.

In 1967 women’s running was barely acknowledged, with women still banned from most major racing events. Meanwhile, 13-year-old Maureen, or Mighty Moe, was busy breaking records in small races around her Toronto home. While Mighty Moe excelled in the sport, it also brought controversy and stress to her life and she dropped out of the running world two years later. Swaby and Fox have pieced together her story, in this inspiring biography that tells a little known story in the development of women’s distance running. 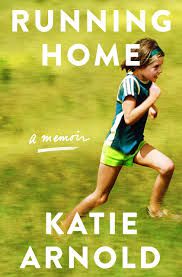 As a reporter on extreme feats of athleticism, Katie Arnold was used to witnessing others climb mountains, complete races, and pull off other daring feats. After her father’s death from cancer, she turned her observations on her self and started running as a means of dealing with grief and stress. Confronting her own fear of death, she began training, eventually running ultra marathons and finding healing along the way.

Good to Go: What the Athlete in All of Us Can Learn from the Strange Science of Recovery by Christie Aschwanden

If you’ve ever been curious about the latest trends and rumors in recovery science, pick up this enlightening book by Christie Aschwanden. Aschwanden tackles everything from cryotherapy to whether “recovery beer” is a thing. Centering around the question of how the body can recover in order to maximize performance, the book provides a straightforward look at how the body heals and what we can do to help.

When thinking about the life and work of acclaimed writer Haruki Murakami, running is not necessarily the first thing that comes to mind. You may not know that Murakami is a dedicated runner who has trained for the New York City Marathon, but after reading this journal-style book about his progress in the sport, you’ll see how running and writing intertwine for this literary master.

Olympic hopeful Becky Wade traveled to nine countries to explore their running cultures and communities. Comparing the training approaches, miles logged, and unique habits of runners around the world, Wade investigates the similarities and differences between the paths of some of the world’s best runners on this unique global tour of a worldwide sport.

Running for My Life: One Lost Boy’s Journey from the Killing Fields of Sudan to the Olympic Games by Lopez Lomong

A sobering memoir of violence, running, and life. Lopez Lomong went from a Lost Boy of Sudan to a Nike-sponsored Olympian, and he tells the highs and lows of his life in this inspiring story of overcoming some of the most extreme odds to achieve your dreams. A harrowing look at the turmoil in Lomong’s home, this book will amaze you with Lomong’s dedication to both his own goals and to helping others achieve their’s.

Jog On: How Running Saved My Life by Bella Mackie

Bella Mackie made a deal: use running to help her combat depression and anxiety and try to do it without giving up her love of ice cream. Sharing her own thoughts and the advice she received from doctors, coaches, and friends, Mackie blends humor and research to share how running saved her life and motivate you to take steps to help you feel that your own life is back on track. 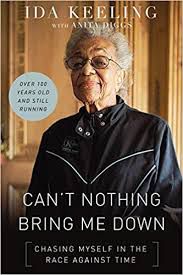 Can’t Nothing Bring Me Down: Chasing Myself in the Race Against Time by Ida Keeling

Ida Keeling isn’t just a 104-year-old runner from the Bronx who has smashed world records and inspires those in her community. She also weathered the Great Depression, fought in the Civil Rights Movement, and began running at the age of 67 after the brutal murder of her sons. Using running as a means to cope with anger and grief, Miss Ida, as she’s known to her neighbors, shows us how to rebuild in times of tragedy and that you’re never too old to try something new.

Whether you’re running for stress relief, health reasons, to set a new P.R., or just because it feels fun, hopefully one of the authors above will help you feel more motivated and knowledgable about your running than ever!