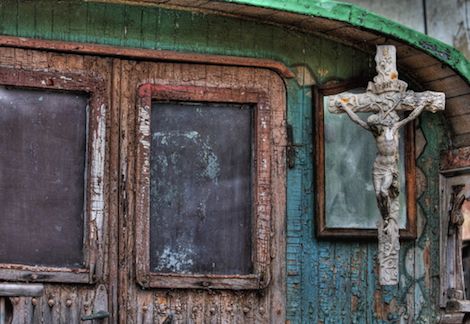 With the booming economy in the 1900s, thousands of people left their rural homes and joined the battering ram of urbanization, setting up new homes in the city and commencing a life of work in the concrete jungles. Economies are boom and bust of course, and the bust that came in the 1920s hit the world hard. Books about “gypsies” tell how, as the 1930s pushed onward, people in Europe returned home to their rural hometowns, casting out the settlers who had moved in to undertake the required work to keep those areas going.

Those cast out found themselves nomadic for the first time in generations – among them the Roma people who had lived in Europe for hundreds of years. Though recognised as a nomadic group, the reality is that Roma people were settled in the towns and villages of Europe for many years. And though talk about genocide in World War II focuses mostly on the impact on the Jewish communities in the Holocaust, the Roma too were targeted for destruction. They call it the Porrajmos, or ‘devouring’. Their records are poor because they have never had an opportunity to collect their own history, but estimates suggest that between 500,000 and 1,500,000 Roma died in the Porrajmos, many of them at Birkenau. Though it’s very hard to locate, And the Violins Stopped Playing by Alexander Ramati tells a true tale of a Roma family who faced the horror of the Porajmos. 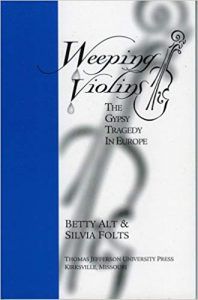 As Hitler’s policies drove the world to war, the Roma found themselves weighed and measured, their ethnic status determined by governments that re-possessed their houses and stole their belongings. The Roma community in Europe has never recovered from this loss, and no reparations have ever been paid. This is all well dealt with in Weeping Violins: The Gypsy Tragedy in Europe by Betty Alt and Silvia Folts. Forced to wander the countries of Europe with no welfare support, no government help and a drastically reduced population that has never recovered from its genocide, the Roma have been demonised for several generations without pause.

It’s 2018, and the Italian Prime Minister Matteo Salvini has expressed interest in collating a list of Roma people before expelling them from Italy. It sounds like the same actions undertaken by the Nazi party in order to prepare for their ‘Final Solution’ – but Salvini has merely shrugged this off when confronted with it. He says that expelling these people is an ‘answer to the Roma question.’ That terminology is both familiar and frightening.

The Roma are not the only nomadic group in Europe – the Irish Travellers, Romany, Lom, Dom, and Sinti are all nomadic or once-nomadic groups, all tarred with the same brush of criminality and condemned to the margins. It is important here to recognise the privilege of not belonging to one of these groups, where poverty is rife, education outcomes are poor, prison representation is too high, and ongoing social issues around violence in the home, LGBTQ rights, and high rates of suicide all have to be considered. Jewish communities after World War II were able to work together to build and commemorate their history. The Roma had no chance to do that, and as a result, their history is pottered and incomplete, carried mostly by the community itself and the few charities who work with these groups. 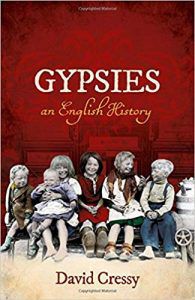 The same can be said for Romany in the UK – where education for these groups has long been poor and opportunities are far from equal compared to everyone else. David Cressy’s recent offering Gypsies offers up as much history as may exist about the English groups, noting along the way that Romany voices are rarely heard unless filtered through news stories, reality tv shows and government documentation. Damian Le Bas, a Romany author, has recently written The Stopping Places in an effort to reclaim his heritage and discover the places across the UK where his great grandmother used to stop at along the road during her youth. Le Bas is an actual Romany voice, though the Oxford education he has attained shows through in the lyricism of his words to a heavy extent here. The book is worth the read precisely because it’s history from the horse’s mouth; Le Bas gives time and effort to communicating Romany culture to the reader. 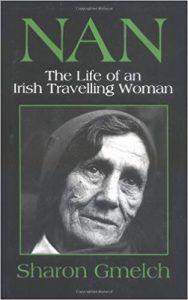 The life of an Irish Traveller in Ireland or Northern Ireland is also still one of hardship; the same poor education outcomes and a suicide rate 6 times the national average keep Travellers firmly in the margins again and again. Over a series of decades, Sharon Gmelch spent time with the Travelling community and wrote Nan: The Life of an Irish Travelling Woman, which is a story of heartache and pain. Though the book is far from perfect, it gives an insight into the place of women in the community and the extremely tough lives women of Nan’s generation had to survive.

The universal experience of these nomadic communities is one that isn’t shared by the vast majority of people on this planet and the intersectionalities of these groups with other minorities need better exploration in our books and in our author’s voices. I’ve worked with the Traveller and Roma communities over a period of years but I’m not one of them. What does it mean to be LGBT and a Traveller? How can the world better support mental health concerns of minority groups where shame still plays such a heavy role in daily life? How can we engage groups that have suffered so much, and where can we gain trust? The answer isn’t in Matteo Salvini’s list.