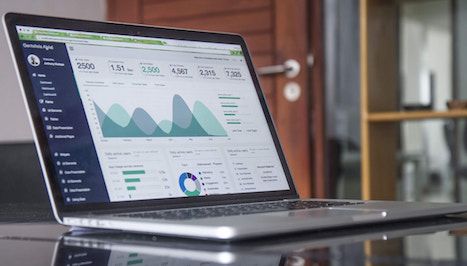 If you’ve been paying attention, you know that on December 14, the FCC (under Ajit Pai’s leadership) dismantled net neutrality regulations that prohibited internet service providers (ISPs) from altering the way consumers connect to the internet. Net neutrality is the way your internet has always worked. In as simple terms as possible, net neutrality regulations prohibit companies (like Verizon or AT&T) from blocking or slowing down your access to certain websites, or forcing companies to pay to stay competitive. I’ll be linking to further net neutrality resources and an overview video at the end of this post, but as a book lover, I know that I can most fully understand the world through books. Books about net neutrality help me better grasp the very real issues, its nuances, and the freedoms at stake with this regulatory change.

To that end, I’ve compiled a list of six books about net neutrality—a starting reading list. These books all come to the discussion from a different angle and with different view points, with some tackling our current governance of the internet, how the internet works to begin with, how big telecom companies formed, and predictions for the future of the internet in terms of social change.

But, I also know that our current world moves faster than publishing, and net neutrality books can only go so far. I’ve also included more information about each of the authors, along with links to their Twitter accounts where you’ll find more up-to-date information and developments about net neutrality changes and challenges. 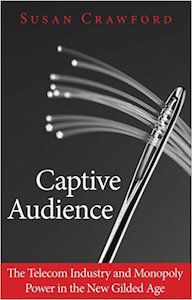 Captive Audience: The Telecom Industry and Monopoly Power in the New Gilded Age by Susan Crawford

“Ten years ago, the United States stood at the forefront of the Internet revolution. With some of the fastest speeds and lowest prices in the world for high-speed Internet access, the nation was poised to be the global leader in the new knowledge-based economy.

Today that global competitive advantage has all but vanished because of a series of government decisions and resulting monopolies that have allowed dozens of countries, including Japan and South Korea, to pass us in both speed and price of broadband. This steady slide backward not only deprives consumers of vital services needed in a competitive employment and business market—it also threatens the economic future of the nation.”

Susan P. Crawford is the John A. Reilly Clinical Professor of Law at Harvard Law School. She served as President Barack Obama’s Special Assistant for Science, Technology, and Innovation Policy (2009) and is a columnist for WIRED. She is a former Board Member of ICANN, the founder of OneWebDay, and a legal scholar. | Twitter 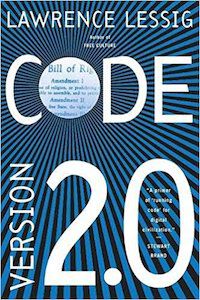 Code: And Other Laws of Cyberspace, Version 2.0 by Lawrence Lessig

“Under the influence of commerce, cyberspace is becoming a highly regulable space, where behavior is much more tightly controlled than in real space. But that’s not inevitable either. We can-we must-choose what kind of cyberspace we want and what freedoms we will guarantee. These choices are all about architecture: about what kind of code will govern cyberspace, and who will control it. In this realm, code is the most significant form of law, and it is up to lawyers, policymakers, and especially citizens to decide what values that code embodies.”

Lawrence Lessig is the Roy L. Furman Professor of Law and Leadership at Harvard Law School. He was also a professor at Stanford Law School, where he founded the school’s Center for Internet and Society, and at the University of Chicago. | Twitter 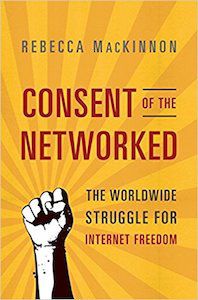 Consent of the Networked: The Worldwide Struggle For Internet Freedom by Rebecca MacKinnon

“A clarion call to action, Consent of the Networked shows that it is time to stop arguing over whether the Internet empowers people, and address the urgent question of how technology should be governed to support the rights and liberties of users around the world.”

Rebecca MacKinnon is a Bernard L. Schwartz Senior Fellow at the New America Foundation, and cofounder of Global Voices, an international citizen media network. She also serves on the Boards of Directors of the Committee to Protect Journalists and the Global Network Initiative. | Twitter 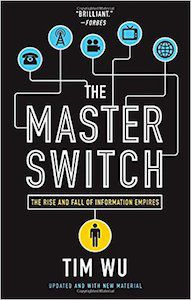 The Master Switch: The Rise and Fall of Information Empires by Tim Wu

“It is easy to forget that every development in the history of the American information industry—from the telephone to radio to film—once existed in an open and chaotic marketplace inhabited by entrepreneurs and utopians, just as the Internet does today. Each of these, however, grew to be dominated by a monopolist or cartel. In this pathbreaking book, Tim Wu asks: will the Internet follow the same fate? Could the Web—the entire flow of American information—come to be ruled by a corporate leviathan in possession of “the master switch”? Here, Tim Wu shows how a battle royale for Internet’s future is brewing, and this is one war we dare not tune out.”

Tim Wu is a professor at Columbia Law School and the director of the Poliak Center for the First Amendment at the Columbia Journalism School. | Twitter 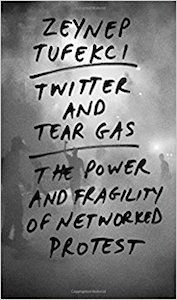 Twitter and Tear Gas: The Power and Fragility of Networked Protest by Zeynep Tufekci

“Zeynep Tufekci explains in this accessible and compelling book the nuanced trajectories of modern protests—how they form, how they operate differently from past protests, and why they have difficulty persisting in their long-term quests for change. Tufekci speaks from direct experience, combining on-the-ground interviews with insightful analysis. She describes how the internet helped the Zapatista uprisings in Mexico, the necessity of remote Twitter users to organize medical supplies during Arab Spring, the refusal to use bullhorns in the Occupy Movement that started in New York, and the empowering effect of tear gas in Istanbul’s Gezi Park. These details from life inside social movements complete a moving investigation of authority, technology, and culture—and offer essential insights into the future of governance.”

Tufekci is an associate professor at the School of Information and Library Science at the University of North Carolina and a faculty associate at the Berkman Center for Internet and Society at Harvard University. | Twitter 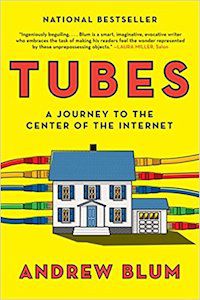 Tubes: A Journey to the Center of the Internet by Andrew Blum

“Takes us on an engaging, utterly fascinating tour behind the scenes of our everyday lives and reveals the dark beating heart of the Internet itself. A remarkable journey through the brave new technological world we live in, Tubes is to the early twenty-first century what Soul of a New Machine—Tracy Kidder’s classic story of the creation of a new computer—was to the late twentieth.”

Reading these books about net neutrality can only go so far. As we’re finding over and over again in 2017 (and as we journey into 2018), collective action is an important component of being an engaged and responsible citizen today.

The following video gives a one-minute overview of net neutrality, and why it’s so important.

Organizations like Free Press have committed themselves to challenging the most recent dismantling of regulations. Find ways to get involved (either by donating to their action fund or calling your government representatives) here.

Net neutrality regulations protect everyone—from classrooms, to libraries, to small businesses. Read these books about net neutrality, gear up, and then find a way to take action to protect continued, unfettered access to the internet.