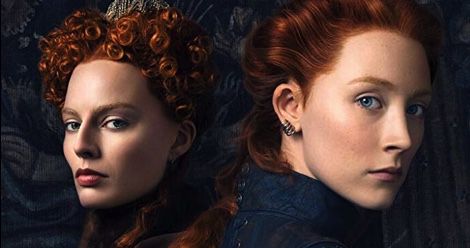 Royal cousins Mary Queen of Scots and Queen Elizabeth I have fascinated us for centuries. Both were queens at a time when it was unusual for women to rule at all, let alone without a king. Both were descended from Henry VII and Elizabeth of York, the couple who famously united the warring York and Lancaster houses to end the Wars of the Roses. And both had to put up with a lot of crap from men. 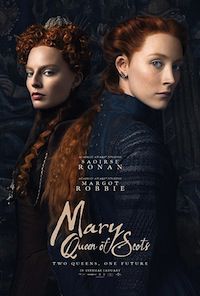 A new movie out December 7 called Mary Queen of Scots dramatizes the parallel stories of these two cousins, who never actually met each other. Elizabeth was born to Henry VIII and his second wife, Anne Boleyn, later beheaded by Henry. As a second daughter, with her younger half-brother next in line to become king, Elizabeth never expected to inherit the throne. But after the deaths of her two siblings, Edward VI and Mary I, she did. She kept her crown (and head) by never marrying, maintaining a network of spies and informants, and getting rid of threats to her power—one of whom was her cousin Mary.

Meanwhile, Mary, nine years younger, had inherited her title Queen of Scots when she was only six days old. The daughter of King James V of Scotland (the son of Henry VIII’s sister Margaret) and Mary of Guise, she was sent to the French court for protection from Protestants and the English, who wanted to seize control of Scotland. Mary married the French heir Francis II and was briefly queen consort of France. When he died, she returned to Scotland, where political and romantic drama ensued. From the trailer, it looks like the movie takes up from there, so I won’t spoil the rest of what happens—except to say that these two queens had a unique, tragic relationship.

For historical background before (or after) you watch the movie, here is a list of books about Mary Queen of Scots and Elizabeth I. I’ve tried to focus on the two queens themselves, including both historical fiction and biographies. A note, though: an overwhelming majority of books about Mary Stuart and Elizabeth Tudor are written by white people. But there are authors of color writing about the Tudor and Stuart periods more broadly, and there were absolutely people of color living in Scotland and England during the 16th century. Book Riot’s 50 must-read post of books about Tudor England includes some authors of color, so please check out that list, too.

Books by Mary Queen Of Scots and Elizabeth I

As royal women, Mary and Elizabeth were very well-educated. Each spoke multiple languages and was taught music, poetry, and other essentials for life in a 16th-century court. Mary wrote poetry of her own dedicated to people in her life (including her three husbands), collected in the book Bittersweet Within My Heart: The Love Poems of Mary, Queen of Scots by Robin Bell.

You can also read some of Elizabeth’s writings in Elizabeth I: Collected Works, edited by Leah S. Marcus, Janel Mueller, and Mary Beth Rose. This collection includes letters, speeches, poetry, and prayers by Elizabeth, who presided over an unprecedented renewal of literary culture in England. Writers like Spenser, Marlowe, and Shakespeare were popular at this time. 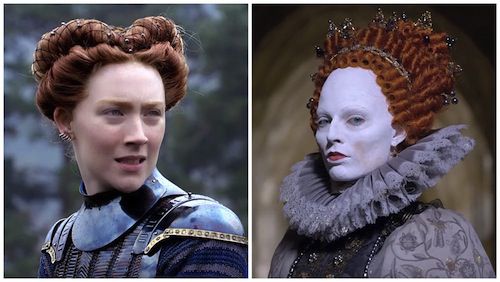 Saoirse Ronan plays Mary (left) and Margot Robbie plays Elizabeth (right), who was known to use a mixture of lead and vinegar as makeup. Image from IMDb.

Biographies of Mary Queen of Scots and Elizabeth I 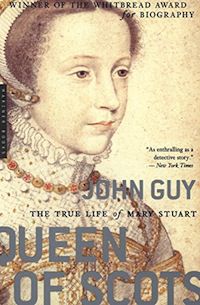 There are dozens of biographies about both women, so make space on your TBR pile. The new movie seems like it will be sympathetic to Mary, as it’s based on John Guy’s biography Queen of Scots: The True Life of Mary Stuart. Award-winning historian Antonia Fraser has also written a biography of her called Mary Queen of Scots.

Because the two queens are often viewed as rivals, there are also several books about their relationship. Jane Dunn’s Elizabeth and Mary: Cousins, Rivals, Queens and Alison Plowden’s Two Queens in One Isle are about the complex relationship between the two. Elizabeth was Protestant and Mary was Catholic, which was the source of much friction between the two of them as well as their two countries.

When it comes to the Tudors, you can’t go wrong with two books by historian Alison Weir. The Children of Henry VIII is about Elizabeth, her two siblings, and their cousin, Jane Grey, all of whom had a claim to the throne. The Life of Elizabeth I is a portrait of the Queen, diving into the familiar stories about her, like why she was called the Virgin Queen and how she rode out war and religious unrest.

Historical Fiction Books About Mary Queen of Scots and Elizabeth I 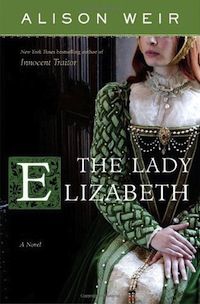 Weir is also a historical fiction writer, with two published novels about Elizabeth: The Lady Elizabeth, about her life before she became queen, and The Marriage Game, about Elizabeth’s relationship with her close friend and advisor, Lord Robert Dudley.

Novelist Margaret George, known for her extensive research, has written fiction about both queens. Mary Queen of Scotland and the Isles uses original documents like letters and poems to tell Mary’s fascinating life story, while Elizabeth I is about the shifting relationship between the Virgin Queen and another of her cousins, her lookalike Lettice Knollys.

And of course, Philippa Gregory has a book about Mary and Elizabeth. The Other Queen is set in 1568, when Mary comes to England looking for sanctuary and Elizabeth has to decide what to do with this rival for her throne. Barbara Kyle takes on this same time period in Blood Between Queens, but from the point of view of a lady-in-waiting assigned to spy on Mary. 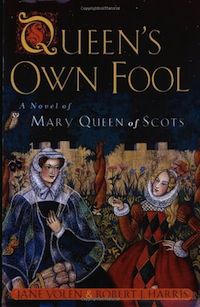 Finally, a shout-out to the middle-grade Royal Diaries series, which is how I first became interested in the Tudors and Stuarts many years ago. Mary and Elizabeth each have their own book, Mary Queen of Scots: Queen Without a Country and Elizabeth I: Red Rose of the House of Tudor, both by Kathryn Lasky. For historically minded teens, Jane Yolen’s YA novel Queen’s Own Fool is narrated by a real person, Nicola or La Jardiniere. Little is known about the real figure, but in Yolen’s novel, she’s a jester in Mary’s court and one of her closest confidantes.