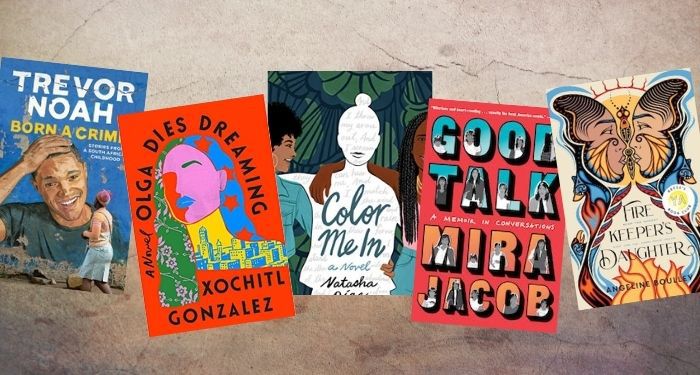 The data for the 2019 census shows that the white population decreasing about 9 more percentage points to 60.1% while the Latine or Hispanic and Asian American populations increased (source). The most noteworthy difference here is that more than half of young people, 16 and younger, identify as ethnic or biracial. It’s no wonder then that multicultural books are hitting a chord with so many readers, especially children’s and YA readers.

Since more and more people are living between cultures, it makes sense that literature reflects this real life changing trend, since it is many people’s experience. I’ve gathered a list of titles that have either characters, or real people, who have had to live between two or more cultures, people living in the hyphen or the in between. 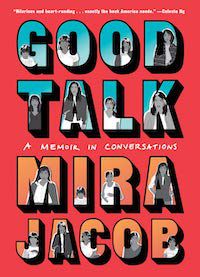 Good Talk: A Memoir in Conversations by Mira Jacob

Jacob’s often humorous graphic memoir helps readers understand a first generation Indian American’s experience. Jacob grew up American in a traditional Indian household. Then, when she had her biracial son Zakir, she had to field many more questions from him as he grew up. Jacob found herself having difficult conversations about race, sex, love, and family that she didn’t have as candidly before. These conversations have her examining her past through a new lens and reflecting on what it means for her in the present. 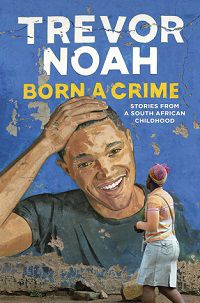 In Trevor Noah’s memoir, he explains what it was like growing up biracial in South Africa during apartheid. Son of a Black mother and white father, Noah was in his own designated racial group: colored. He didn’t fit in with his African family since he was lighter skinned, but he also wasn’t white, like his father. His existence was technically illegal because at the time, South Africa outlawed interracial relationships. Noah talks about how his grandmother didn’t feel like she could discipline Noah the same way as she could her other grandchildren because of his light skin. Then, when Noah moved to the United States, he experienced being Black in a completely new way. 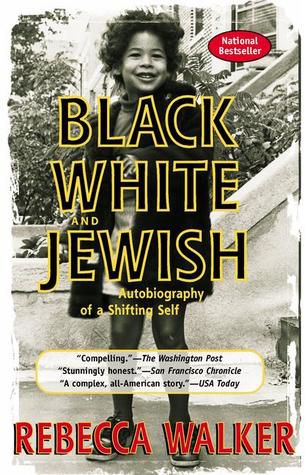 Black, White & Jewish: Autobiography of a Shifting Self by Rebecca Walker

In this memoir, daughter of civil rights activist Alice Walker and lawyer Mel Leventhal discusses what it was like to grow up biracial during the 1970s and 1980s. Rebecca Walker was often held up as a symbol, either of outrage and oddity or of harmony and a triumph of love over hate. After her parents divorced, Rebecca was left lonely to navigate two very different worlds on her own. The older she got, the further apart the worlds became. She wasn’t sure how to identify or what she represented. In this book, Rebecca Leventhal Walker tries to redefine herself not as a symbol, but as a human with a soul, and offers a fresh perspective on the challenge of personal identity. 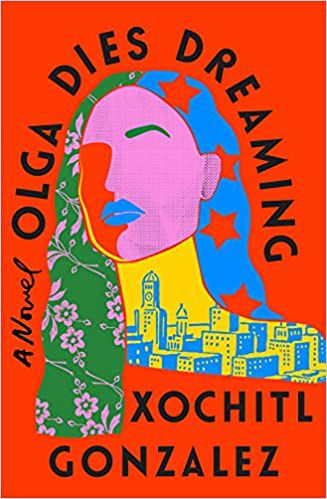 Olga and her brother, Pedro “Prieto” Acevedo, are big New York City names in 2017. Prieto is a congressman representing a rapidly gentrifying Latinx neighborhood, and Olga is a wedding planner to the 1%. While things look good on the outside, behind closed doors is a different story. The siblings, who were raised by their grandmother, have to reconcile their public facing identities when their activist mother, who abandoned them for a militant political cause, blows back into their lives with the force of the hurricane she’s escaping. What does the American dream mean for them? Political and familial strife hits them hard and they have to decide how big a storm they can weather together. 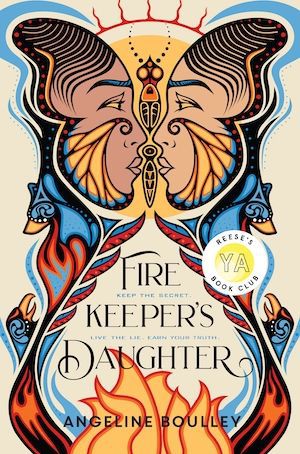 Eighteen-year-old Daunis Fontaine has never quite fit in. She’s a biracial, unenrolled tribal member, who has had scandal follow her ever since she was born. She wants to get out of town to study medicine, but she doesn’t feel like she can leave her mother, a white woman, after tragedy strikes her family. Things start to look up when she meets Jamie, a new hockey player on her brother Levi’s team. But when she witnesses a murder, she finds herself between more worlds that the two opposing ones she grew up with. The secrets she reveals has her finding out what it really means to be a strong Ojibwe woman and what lengths she’ll go to to protect her community. 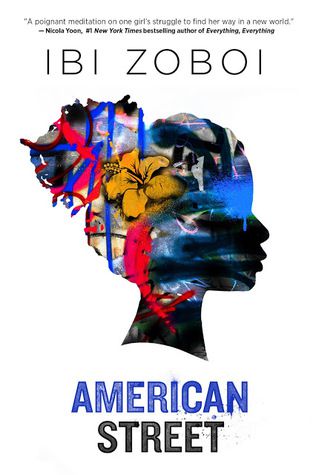 Haitian immigrant, Fabiola Toussaint, has come to America with her mother to live with family and pursue the American Dream. After leaving Port-au-Prince and arriving in Detroit, her mother is detained by U.S. immigration, leaving Fabiola on her own to figure out this new country and culture. Luckily, she has family with cousins her age who take her in, but it doesn’t lessen the learning curve of a new school, new romance, and the grittiness of Detroit’s west side Fabiola has to overcome. Just as she starts to find her way, a dangerous proposition presents itself and Fabiola has to choose what is most important to her. 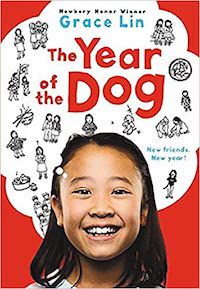 The Year of the Dog (A Pacy Lin Novel, 1) by Grace Lin

Pacy’s family is celebrating the Lunar new year. When her mom tells her that the year of the dog is when you’re supposed to find your best friends and who you really are, Pacy starts her search right away. While her parents are Taiwanese and they observe many Taiwanese customs at home, Pacy only speaks English and was born in the United States, making her American, too. At school, people call her Grace, her American name, but that’s not what she’s called at home. Too Asian for school and too American for home, Pacy isn’t sure where she fits in. A new Asian student enrolls after the new year and now she isn’t the only Asian (besides her sister) at her school. This year really is shaping up to be the biggest of her life. 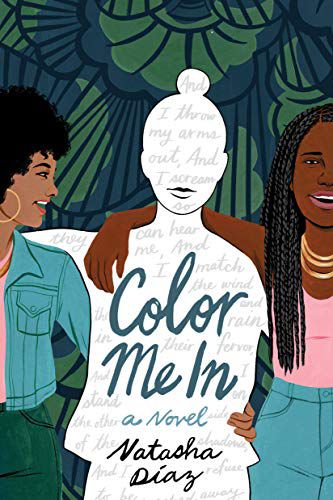 Color Me In by Natasha Díaz

Nevaeh Levitz never thought much about her biracial identity. When her Black mom and Jewish dad split up, she’s forced to leave the affluent neighborhood of New York City she’s known her whole life and move with her mother to Harlem. This move makes her confront her identity head-on. She wants to get to know her extended family better, but it’s more difficult than she anticipates when her cousin can’t stand Neveah, who can pass as white, is too privileged, pampered, and selfish to know what kind of injustices the rest of her family has had to face their whole lives. To make things worst, her dad decides she should have a belated bat mitzvah instead of a sweet sixteen, which is sure to be more social humiliation at her private school than she can handle. The push and pull between her worlds is complicated and Neveah stays quiet, like she always does when things get hard. But when she discovers a secret from her mom’s past, starts to fall in love, and sees first hand the prejudice her family faces, she finally is able to speak up for herself for the first time in her life. 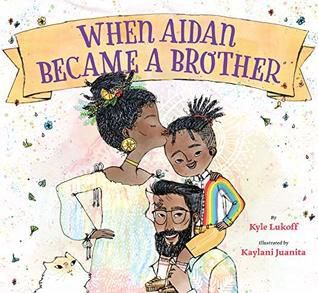 When Aidan Became a Brother by Kyle Lukoff

Aiden is about to become a big brother, and he couldn’t be more excited. He wants to make everything just right for his new sibling. When Aiden was born, everyone thought he was a girl. His parents, who are Black and South Asian, gave him a girl’s name, decorated his room in a girl’s fashion, and dressed him in clothes all the other girls were wearing, too. After they realized that he was a trans boy, they fixed the parts of his life that didn’t fit him. With the new baby coming, Aiden is determined to make them feel welcome. But what does “making things right” really mean? Together, Aiden and his family decide how to decorate the baby’s room, choose a name, and finding the cutest rompers and sleepers. He’s afraid he’s going to mess things up for the baby, but his parents help him understand that through honest communication, mistakes can be fixed. He has everything he needs to be the best big brother already, all the love he’s ready to give the baby.