There’s something very invigorating about performances, words that are meant to be said or cried or declared bravely aloud, even when they are recorded on the page. I say this because after last weekend, I was left feeling oddly empty of words. It was a feeling that continued until I idly started re-reading a book I’d picked for my book design class and came across this gem:

“Immigration,” as a concept, is born in the era of imperialism. “Immigrants,” in this context, are not just those who cross boundaries, but those who pointedly enter the advanced industrial states from lands of dusky skin. Immigration is always already about mobile capital and immobile race. Colonial rulers went where they willed, and they even moved people from one colony to another; but the colonized were not to be fully welcomed in the heartlands of the empire, in Europe, in the United States. 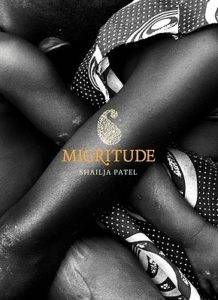 This is from the foreword “Speaking of Saris” by Vijay Prashad for Shailja Patel’s biographical play-turned-book Migritude. I knew I had managed to pick exactly the right book at the right time because the next part I came across made me want to jump up and crow Patel’s words at my unfortunate fellow commuters:

We overdress, we migrants. We care too much how we look to you. We get it wrong. We ought to look like we don’t give a fuck. We show up ridiculously groomed, bearing elaborate gifts. We are too formally grateful. […] We absorb information without asking questions. Questions cost us jobs, visas, lives. We watch and copy. We try to please.

Watching a play like this would have had my heart hammering in my chest, but reading these words off a page is equally electrifying. Knowing especially that it is meant to be performed ensures that the words don’t lose any of their potency, it is an urgent and visceral experience. 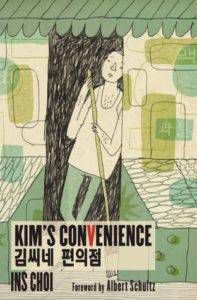 And even though the pacing of Ins Choi’s play is slower than Patel’s, I would list Kim’s Convenience in the same breath as breath-taking works like Migritude. Both, after all, are rather timely reads. Both are incredibly honest books about immigration and capture an array of immigrant experiences.

Which led me to a list of books about displacement and immigration that could make for incredible stage performances. The Arrival by Shaun Tan is easily the first on my wishlist of books I’d like to see adapted to the stage. Tan’s work, though wordless and whimsical, speaks volumes about the real-life events, makes overt references to the Holocaust, and uses simple but gorgeous images to talk about the pain of being uprooted, the fear of losing your family, and trying to fit into a world that is very different from your own. In a hypothetical play like this one, I think it would be a great chance for the departments that deal with the audios and the visuals to really shine. It would also be the kind of play that could be performed anywhere since the only thing that would need to be translated is the playbill. It would also have a crossover appeal because its fantastical elements would translate across age groups.

Persepolis by Marjane Satrapi, both volumes, was my second choice. It has already been adapted into an animated film, but I think a play could revive people’s interest in investigating Iran’s history—and the people/countries that shaped Iran’s present—for themselves, rather than believe everything that has been spewed on so-called news channels of late. It would also be a great joy to see the characters played by Iranian actors/actors of Iranian descent, unlike the cast of the animated film. 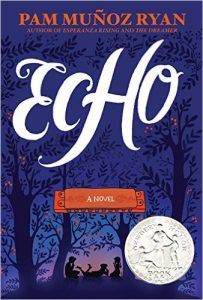 Echo by Pam Muñoz Ryan is not entirely about displacement, but it is a substantial theme in the novel. The story has also been adapted into an award-winning audiobook, complete with music—as music is the thing that binds Ryan’s characters across lands and histories. The book definitely has an aural quality to it, the words chime with poetry, and honestly, I believe that this musical quality could work well on stage. Imagine being in a theatre and just knowing that the words or the notes or the scenes that gave you goosebumps is what also gave your neighbor goosebumps.

Music does not have a race or a disposition! Every instrument has a voice that contributes. Music is a universal language.

Any audience that experiences Echo together will leave feeling more connected with the strangers around them, maybe even give them a push towards understanding the people in their lives they once considered unknowable.

My final pick for books about immigrants that could successfully be adapted for the stage strays from the theme of refugees and immigrants, but it is the book that most reminds me of Patel’s Migritude. Isabel Quintero’s Gabi, a Girl in Pieces is part-prose and part-poetry and it is without a doubt my favourite book to celebrate a protagonist (and a way of life) that (maybe unintentionally) defies what most people understand as “American” or even, what most people understand as “Mexican”. It is pure heart and every word that sends Gabi exploring herself and her life is a word that—as Alan Bennett would put it—reaches out of the page to hold your hand:

That’s the magic of poetry– some gay Jewish poet wrote about people wasting away around him because of drugs, and I, a straight Mexican-American girl, know how he felt because I am seeing the same waste he witnessed over fifty years ago …

There’s something about these books about immigrants — the particularly brave and loud ones — that lends great strength to its listeners, if only they know where to look.