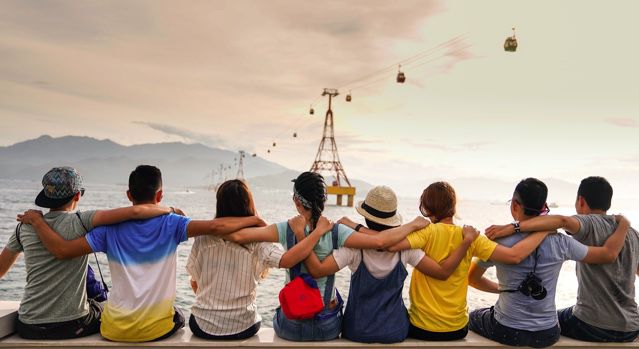 Family can be a touchy subject, particularly around the holiday season. While some of you may have returned home to reconnect with beloved family members, others have been gritting their teeth for two months straight. That’s why I find the trope of found or chosen families so meaningful. If your biological family situation doesn’t provide the support system you need, found family novels show you a different way: family is about choice and commitment—not genetics.

So for those who need it this time of year, here are 20 must-read novels (across genres) that focus on families that are made instead of born.

Though it doesn’t take the traditional form of a found family setup, but A Tale for the Time Being has given me the same comforting feeling since I first read it. The two main characters in the novel don’t exist on the same continent, but nonetheless share a deep and unlikely bond. When novelist Ruth finds a diary washed up on the beach near her British Columbia home, she inadvertently “meets” Nao, a 16-year-old in Tokyo whose chaotic and mesmerizing entries tell a story of teenage despair and family drama.

The Akata duology features an important sub-genre of found family fiction: the coven. Twelve-year-old Sunny just doesn’t quite fit in. She’s an American who’s moved with her family back to Nigeria and an athlete with albinism that makes it difficult for her to spend time outdoors. As it turns out, she’s also got magical powers, which introduces her to the world of the Leopard People and to three other youngsters who will join with her as an Oha Coven. 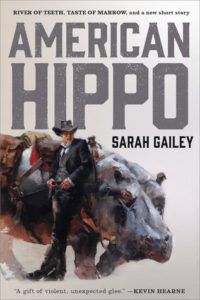 In two novellas (paired here), Gailey introduces a 19th century that might have been, one in which wild hippos roam the swamps of the American South. The person assigned to reclaim the land is Winslow Houndstooth, who recruits an all-star team of criminals and outcasts to help him rein in the rampaging giants. Two things are great here: 1) this isn’t the typical cis white male team you’d expect and 2) these loners find home among themselves—and the hippos.

This middle grade novel is a stellar fit for its target audience, but it also floored this full-grown adult. At 12, Willow Chance is a genius whose life orbits around her fascination with diseases and nature, as well as her devotion to her adoptive parents. When her parents are killed in an accident, Willow is propelled on a journey to find where she belongs in a loud, perplexing world. She finds her way thanks to a struggling counselor, a taxi driver, and the tight-knit family of her Vietnamese schoolmates.

Billionaire tech mogul Vivian Liao intended to go off the grid—but maybe not to this degree. At the behest of the glowing green Empress, Viv is flung through space and time and lands in the middle of a conflict she knows nothing about. Along for the ride on her quest to return home is a diverse ensemble of characters, each of whom are connected (willingly or not) to the Empress. The story makes for a brainier Guardians of the Galaxy, with just as much heart. 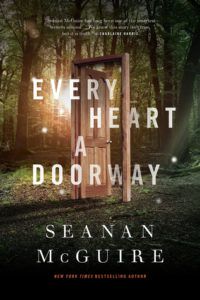 You couldn’t have created a book more perfectly suited to my tastes in a test tube. This series-starting novella introduces Eleanor West’s Home for Wayward Children, both a safe haven and halfway house for kids who got pulled into another world (down a rabbit hole or through a wardrobe) and were then spit back into this one. Dumped here by the biological families who no longer understand them, the kids in Eleanor West’s care share experiences and feelings unknown to anyone else.

Sophie’s biological family, the Hatters, has a role to play in this classic fantasy. But when she’s cursed by the Witch of the Waste with an aging spell, Sophie discovers an entirely new family (mostly of choice). To break the spell, she seeks out the enigmatic Wizard Howl. She finds more than a cure in his castle when she meets Howl’s apprentice Michael and the fire demon Calcifer.

Miss Quinzella Thiskwin Penniquiqul Thistle Crumpet’s Camp for Hardcore Lady Types is a natural place to form a family because it’s filled crafts, games, dangerous quests, and “friendship to the max.” Jo, April, Mal, Molly, and Ripley are misfit besties whose unique and wholesome bond is only strengthened by spooky happenings in the woods and the occasional time travel. 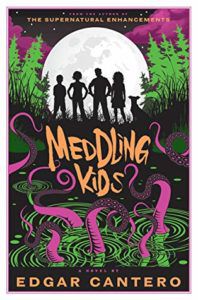 Picture it: Scooby Doo and the gang but with very real monsters. The Blyton Summer Detective Club solved their final case and unmasked their last villain in 1977. Thirteen years later, they’re spread out across the country and now fighting their own personal demons. It’s time to confront what haunts them: that last case. There’s one more mystery they need to unravel, and this un-merry band of misfits—forged into family by hijinks and shared trauma—is the only group that can solve it.

Men at Arms by Terry Pratchett

The City Watch of Ankh-Morpork is dysfunctional, yes. Also disorganized. And very often drunk. But the guards also provide some of the most heartwarming storylines in all of Pratchett’s Discworld novels. In this second installment of the City Watch sub-series, the cast of characters at Watch HQ begins to take shape as the force expands to include several non-human recruits (under the begrudging guidance of Captain Vimes) who must investigate a series of unsanctioned murders.

Similarly, the students at Hailsham, a British boarding school of sorts, are the only ones who can possibly understand each other. As children, Kathy, Ruth, and Tommy only know that Hailsham has unusual customs and that they, its pupils, live removed from the world at large. Over the years, they piece some clues together, but it isn’t until adulthood that they learn the full truth about who they are. The central trio isn’t the most harmonious found family, but the tumult of their relationship only cements their connection.

Jess is the daughter of famous superheroes, but she doesn’t have any superpowers of her own. In an act of accidental rebellion, she signs up for a summer internship with the local supervillain. But hey, she gets to hang out with her secret crush, Abby, while getting paid. Of course, when it comes to heroes and villains, things aren’t often black and white. And over the course of Sidekick Squad series, Jess’s loyalties shift to a new chosen group. 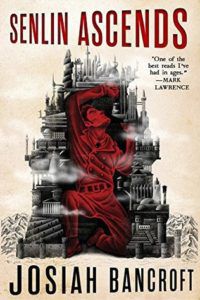 The Tower of Babel may not be the location you’d expect to forge lifelong bonds with strangers, but that’s what happens when fussy headmaster Thomas Senlin shows up at the foot of the tower with his new wife Marya. The pair is soon separated, and Senlin strikes out on a harrowing journey up the tower to find Marya. Along the way, he collects a striking ensemble of helpmates—loyal, helpful, and nothing at all alike—who are each on their own quests to foil the tower’s nefarious plots.

Set in the same universe as Bardugo’s Shadow and Bone trilogy, this YA fantasy is a more intimate and magical (and diverse) Ocean’s 11. Kaz Brekker is a criminal prodigy in the unruly city of Ketterdam. When he’s offered the heist of a lifetime, he puts together a gang of misfits, each skilled and struggling in their own unique ways. Their business venture turns into something far deeper by the time it’s all said and done. 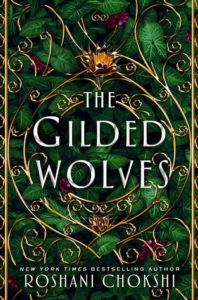 There are just never enough heists. Set in Paris circa 1889, the story takes place alongside the Exposition Universelle (the world’s fair) and focuses on treasure hunter and hotelier Séverin Montagnet-Alarie. Séverin has been recruited by the powerful Order of Babel to hunt down an ancient artifact, and to do so, he pulls together an unlikely crew of experts whose various motives culminate in genuine affection before the job is done.

This warm, epistolary novel is the best endorsement of book clubs money can buy. Under German occupation in World War II, the plucky people of the island of Guernsey formed a society of necessity to discuss what books they had, eat what food they could find, and keep alight what small flame of joy there was. After the war, Juliet, a London writer, begins corresponding with members of the society and revealing their stories, letter by letter.

The Hidden City by Michelle West

A classic component of the found family trope is what I like to call “the pile of orphans.” That’s what happens here in the first book of West’s House War series (set in the same shared universe as both her Sacred Hunt and Sun Sword series). Orphaned and ailing, 10-year-old Jay is taken in by Rath, a shadowy figure with a murky past, and nursed back to health. He’s less than thrilled when Jay begins to rescue even more children to bring into the fold, but all of them are about to face a much larger reckoning.

The Last Unicorn by Peter Beagle

If you read Beagle’s fantasy prototype and it doesn’t melt your heart, well, you’re lying. One unicorn sets out to learn the truth: are the rest of her immortal kind truly gone? Along her journey, she’s aided by Schmendrick, the flailing magician, as well as hearty and hardy Molly Grue. Together, they are traveling companions. But they’re also lost souls who find meaning in their shared quest.

Familiarity doesn’t always breed contempt. Within the cozy confines of the starship Wayfarer, a motley crew winds its way through space in pursuit of a lucrative assignment opening up wormhole tunnels. Amid various dangers and pit stops in their year-long trip, this diverse bunch of oddballs (including, delightfully, the ship’s sentient AI and the engineer she’s fallen in love with) grow as close as their quarters. 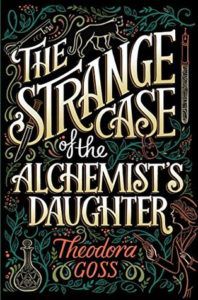 In the most ambitious literary crossover event ever, Goss brings together a formidable group of young ladies who share connections no one else could understand. With a little help from Sherlock Holmes and Dr. Watson, Mary Jekyll hunts her father’s murderer: Edward Hyde. Along the way, she rescues a few more women from the margins, including Hyde’s daughter, Diana; Catherine Moreau, Justine Frankenstein, and Beatrice Rappaccini.