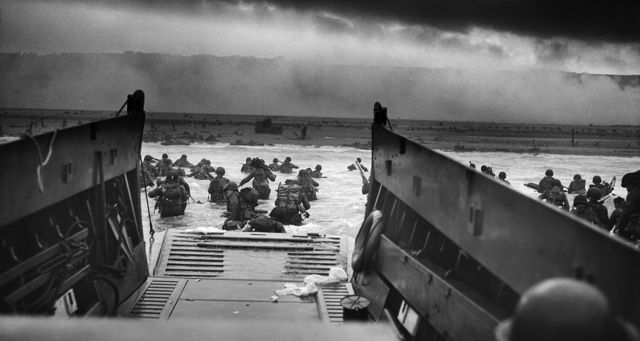 “Two kinds of people are staying on this beach—the dead and those who are going to die.” Those are the famous words spoken by Colonel George A. Taylor, commander of the 16th Infantry Regiment, First Infantry Division,  on Omaha Beach. His words could not have been more true. Whether soldiers lived or died on D-Day was purely a luck of the draw.

For those of you who may not know, June 6th marks the 75th anniversary of Operation Overlord, more commonly known as D-Day. “On June 6, 1944, more than 160,000 Allied troops landed along a 50-mile stretch of heavily-fortified French coastline, to fight Nazi Germany on the beaches of Normandy, France. Gen. Dwight D. Eisenhower called the operation a crusade in which, ‘we will accept nothing less than full victory.’ More than 5,000 Ships and 13,000 aircraft supported the D-Day invasion, and by day’s end, the Allies gained a foot-hold in Continental Europe. The cost in lives on D-Day was high. More than 9,000 Allied Soldiers were killed or wounded, but their sacrifice allowed more than 100,000 Soldiers to begin the slow, hard slog across Europe, to defeat Adolf Hitler’s crack troops.”

Many can rightfully argue that D-Day is the most important day in all of history. Had the Allied troops failed to capture those beaches along the Normandy coast, we would all be living in a much different world today. This is why it is important to honor all those who fought so hard to ensure that did not happen.

It is also quite important to note that there are almost no books about D-Day written by authors of color and very few by women. Most books are written by military historians who are white men, and most of those books neglect the fact that a multitude of Latino and Black soldiers also stormed those beaches. Their service and valor on that day have been marginalized. My own great uncle, Juan Rosales, stormed Omaha Beach as part of the second wave. It is a travesty that in 2019, when most World War II veterans are dead or very old, historians have not done more to share their stories.

But here are some good D-Day reads that you will enjoy: 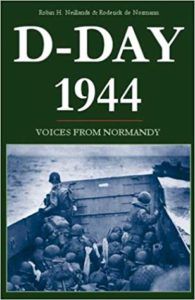 This book does so much justice to all those who fought to establish beachheads off the Normandy coast. Many people incorrectly assume that only American and British troops fought on this day, when in fact Canadians fought to establish a beachhead on their designated stretch of beach codenamed “Juno.” This book is not your typical history book detailing the before and after or the pros and cons. Instead, Neillands does a fascinating job of allowing those who fought on D-Day to tell their stories. He writes: “This is not an official history. It is a collection of stories, drawn from the accounts of people who took part in Operation ‘Overlord,’ of every nation, rank and arm of service. The effect is to tell the story of D-Day in the words of the men who were there.” What an effect this can have on readers. The book unfolds like a psychological thriller and leaves readers yearning for more. You can almost envision yourself on the beaches with the troops as the gruesome details of that day are told from those who were there. This book is one I highly recommend. 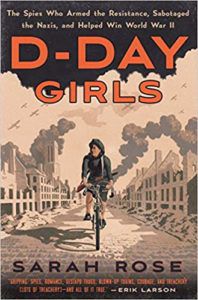 This recently published National Bestseller is a great read. When most people think of D-Day, they think of the soldiers who donned a certain uniform to fight the Nazis. What they often don’t think about, or even know about, are the brave women who fought on the side of good while behind the scenes. This book is the dramatic, untold true story of the extraordinary women recruited by Britain’s elite spy agency to help pave the way for Allied victory in World War II. In 1942, the Allies were losing, Germany seemed unstoppable, and every able man in England was on the front lines. To “set Europe ablaze,” in the words of Winston Churchill, the Special Operations Executive (SOE) was forced to do something unprecedented: recruit women as spies. Thirty-nine answered the call, leaving their lives and families to become saboteurs in France. Sarah Rose concentrates on three of these amazing women in her book. Together, they destroyed train lines, ambushed Nazis, plotted prison breaks, and gathered crucial intelligence—laying the groundwork for the D-Day invasion that proved to be the turning point in the war. This book is remarkable and one that deserves to be read. 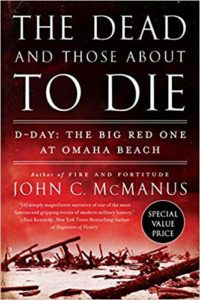 The Dead and Those About to Die by John C. McManus

This book is another great one. The story is mostly told by the 1st Infantry Division (nicknamed The Big Red One) soldiers who made their way off their landing craft assault boats and fought for every square inch of Omaha Beach, the deadliest of all the beaches stormed on D-Day. The soldiers in this division proved their valor over and over again. They had already fought in North Africa and Sicily but they could never have fully prepared for the horror they faced on D-Day. The Dead and Those About to Die draws on a rich array of new or recently unearthed sources, including interviews with veterans. The result is history at its finest, the unforgettable story of the Big Red One’s 19 hours of hell—and their ultimate triumph—on June 6, 1944. I highly recommend this read. You will not be able to put it down. 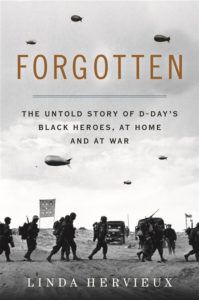 Forgotten: The Untold Story of D-Day’s Black Heroes, At Home and At War by Linda Hervieux

The contributions of Latino and Black soldiers on D-Day simply cannot be ignored. However, this has been the case for most military historians when they conduct their research and write books. Almost every D-Day book will be littered with stories by white soldiers explaining in detail their experiences. But what about the soldiers of color? This is why Linda Hervieux’s book should be considered one of the best D-Day books. She recounted an experience she had once with an archivist in an interview with NBC: “I was speaking with an archivist at an Army museum who told me flatly, ‘There were no black men at D-Day.’ I had just explained to him that I’d spent six years researching and writing the story of D-Day’s only African-American combat unit. The belief is pervasive that there were no soldiers of color on the beaches of France on one of the most important days of World War II. None of the many films made about D-Day like Saving Private Ryan show black soldiers storming Omaha Beach. Most history books don’t mention them. It is a sore point among black veterans.” But they were there, landing under brutal fire early on June 6, 1944. The soldiers of the 320th Barrage Balloon Battalion were packed tight with infantry troops aboard small metal boats that motored toward the Normandy coast obscured by smoke and fire. It was a harrowing ride, and even worse when they landed as early as 9 am. This book is one that deserves to be read.

One historic day has probably never meant so much to the entire world as June 6, 1944 did. In the words of Winston Churchill, “Never in the field of human conflict was so much owed by so many to so few.” Lest we forget.