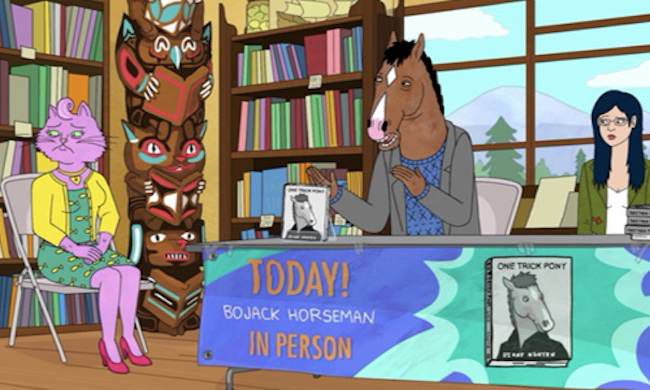 BoJack Horseman, a Netflix original, is pretty much as bookish a show as it comes. BoJack is trying to resurrect his career (once beloved actor on a ‘90s sitcom) by writing a memoir. The thing is he’s not a great person horse and he clearly can’t write a book, so obstacles. The show manages to delve into the world of loneliness and unhappiness while being smart, funny (from silly to dark), dripping with sarcastic social commentary and most importantly bookish. While I’m here for all of that–including Jesse Pinkman’s voice and playing Guess the Celebrity’s Voice–this post is all about the books, cause books! 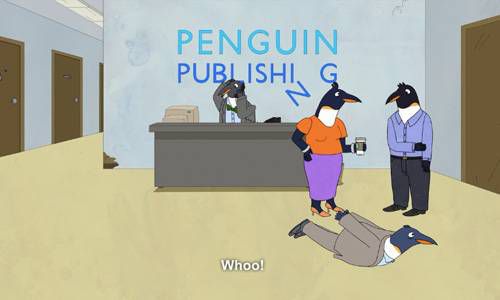 The dire straights of the publishing world: BoJack meets with his publisher Pinky Penguin who is literally a PENGUIN working at Penguin Publishing. They’re desperate for BoJack to stop horsing around (that one I am sorry for) and write his memoir because their financial troubles have left them sans electricity. Turns out they’ve made some bad investments like spending 20 million on marketing for “a young adult franchise called the Swamp Monsters of Malibu.” Maybe they should have gone with vampires of Malibu? 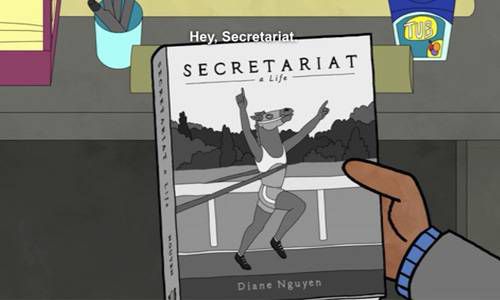 Naturally the ghostwriter hired to write BoJack’s book is the author of Secretariat—yes, that Secretariat. 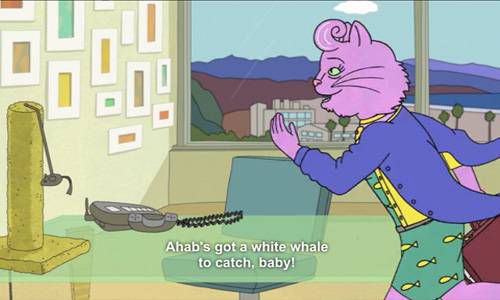 Carolyn’s reference when she finds out an actor/musician has dropped her previous representation: “Ahab’s got a white whale to catch, baby!” I like to think all cats quote Moby-Dick. 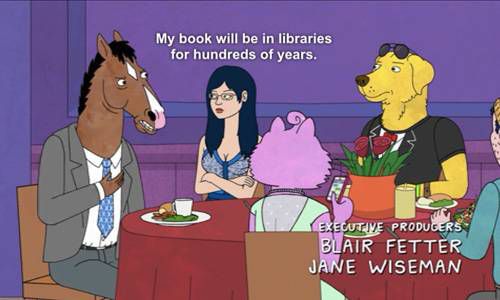 Mr. Peanutbutter makes a comment that sends BoJack into a rant: “My book will be in libraries for hundreds of years. Your BuzzFeed article will be crammed between an animated GIF of a cat falling asleep and a list of fun facts about Legally Blonde.” Tell him how you really feel BoJack. 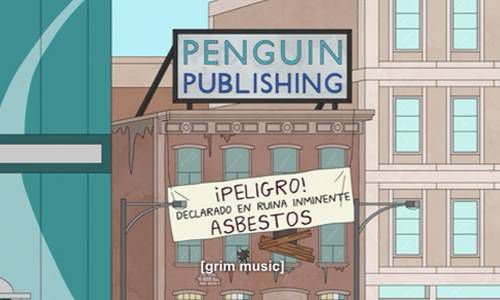 Turns out e-publishing ended up with the skyscraper offices instead… Poor Penguin.

Even BoJack’s idea of a burn is book related:
“Who was that? The Library? Thanking you for never returning a book late?”
Pretty sure Diane, and libraries everywhere, are happy to be burned this way. 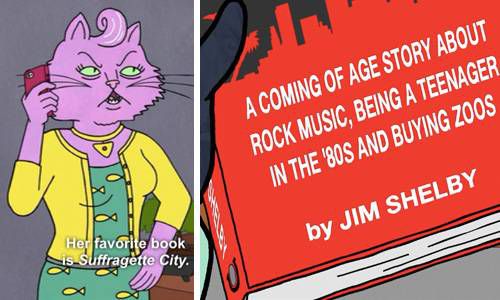 Cate Blanchett’s agent, favorite book (Suffragette City), and the ploy to adapt it to film. Coincidentally a David Bowie song? 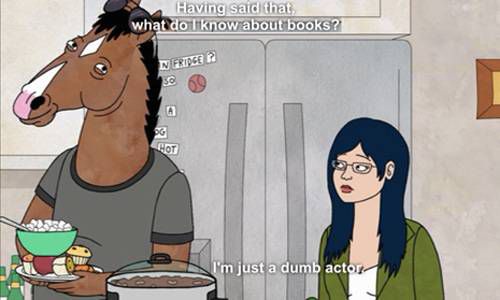 And then BoJack burns himself: “Having said that, what do I know about books? I’m just a dumb actor.” Don’t feel too bad for him, he does a lot of dumb shit. 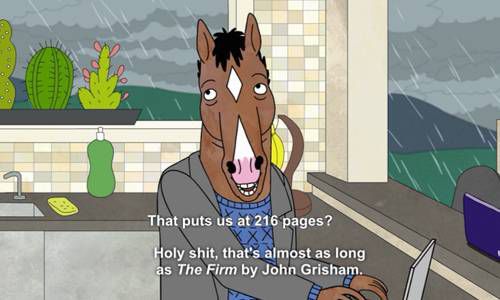 BoJack is excited with his page count: “That puts us at 216 pages? Holy shit, that’s almost as long as The Firm by John Grisham.” Either BoJack’s never read The Firm or he’s terrible at math. Or both. I’m going to go with both. 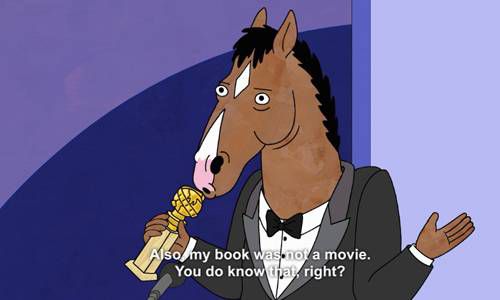 BoJack is happy to accept a Golden Globe Award, especially after years of being banned, but he has questions, including whether the Foreign Press Association is aware that his book is not a movie. 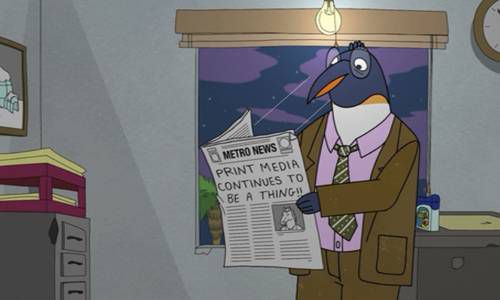 There’s still hope for Penguin! And physical books will continue to exist! 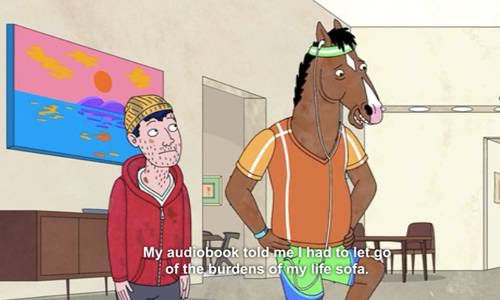 BoJack is an audiobook fan (yay) and finds himself turning his life around thanks to a self-help book. 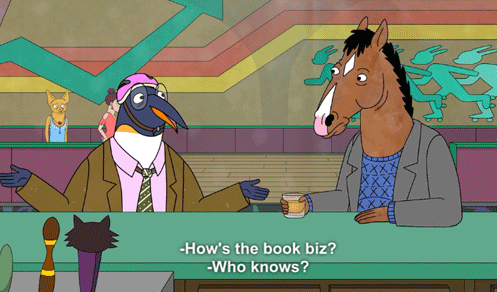 Pinky Penguin leaves the uncertainty of the publishing industry for the stability of network television:

“I jumped off that burning ship. Print media? What a joke. Now I got a job in broadcast network television, a booming industry with nowhere to go but up.”

What could go wrong? 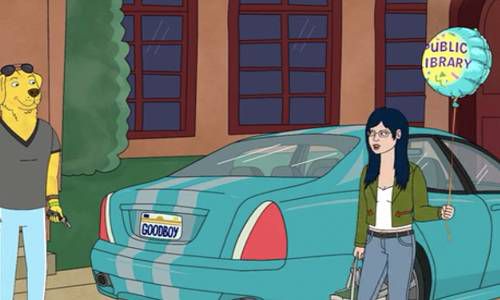 Diane’s perfect birthday involves modern art and a trip to the Public Library. So basically I love Diane and want to spend her next birthday with her. Also why doesn’t my library have balloons? (The Goodboy vanity plate are the kind of details you can find in every scene.) 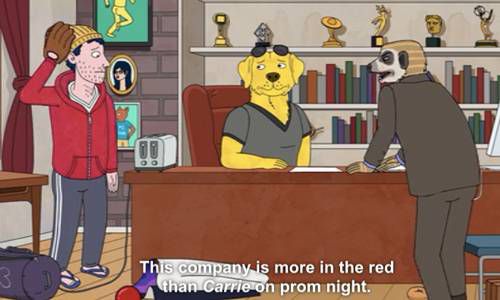 This episode may have hit the bookish jackpot! First, we have an awesome Stephen King reference: “This company is more in the red than Carrie on prom night.” Guess if my business manager was going to tell me my business was done this would be the preferred way. 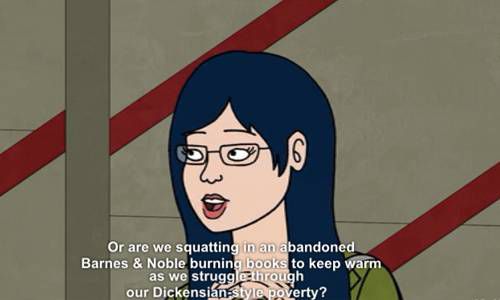 Second, Diane questions her theoretical level of poverty: “Or are we squatting in an abandoned Barnes & Noble burning books to keep warm as we struggle through our Dickensian-style poverty?” Looks like the publishing industry still hasn’t recovered if B&N’s are now abandoned. 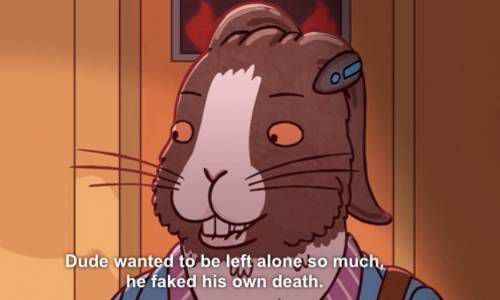 AND THEN apparently a famous author isn’t really dead he just took being a recluse author to a new level. (Nope, not gonna tell you which author.) 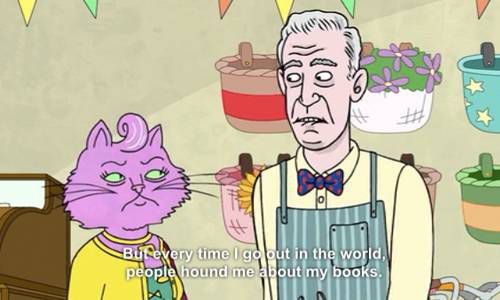 And finally, an author faking his death won’t stop Carolyn from finding him to convince him to sign her as his agent. Now the question is can she convince him, and what does she have planned for his career? (Still not telling.) 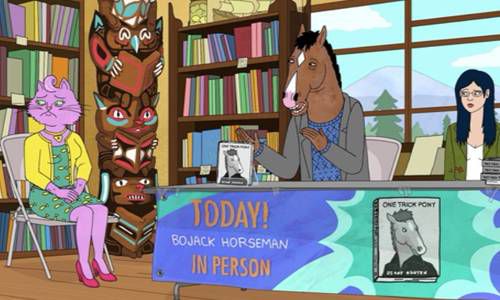 BoJack goes on a book tour that gets “derailed” when Diane’s answer to whether she thought the book would hurt his career is her listing celebrity examples of people who’ve done worse things that never affected their careers. Yes, the episode brilliantly parallels the allegations against Bill Cosby and the fans/media’s response. Diane is the female Hannibal Buress… 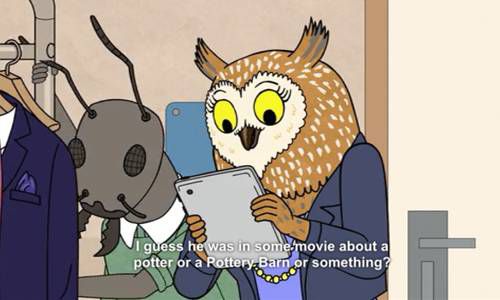 Daniel Radcliffe–voiced BY Daniel Radcliffe–is a contestant on a game show so–wait for it… there’s a Harry Potter reference. Turns out if you’ve been in a coma for thirty years you won’t necessarily know who HP is: “I guess he was in some movie about a potter or a Pottery Barn of something?”

And our (not)dead author (still not telling) is back! Turns out he found a better audience in television: “I knew it. I knew this show would bring us to the heights of human drama more powerfully than literature ever dreamed.” 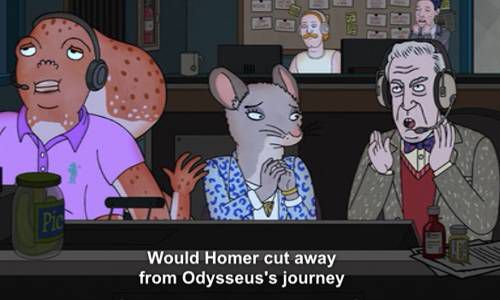 (Not)dead author of course references Homer when the film crew thinks they should cut when things have gotten out of hand on the live television show being produced: “Would Homer cut away from Odysseus’s journey just as he was being enticed by the sirens’ song?” He would not, Mr. (Not)dead author. He would not. 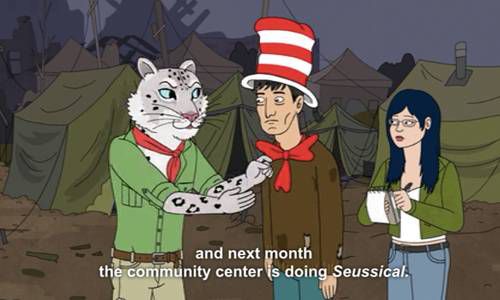 Wanting to have purpose Diane takes a job writing a book about Sebastian St. Clair, who she believes to be a philanthropist. Let’s just say he’s a bit eccentric, I mean he is putting together a “Seussical” production while in war-torn Cordovia. 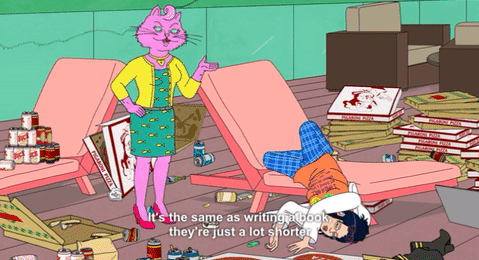 Princess Carolyn has a new job opportunity for Diane: “I want you to come on board and write celebrity tweets… You’re a ghost-writer. It’s the same as writing a book, they’re just a lot shorter and more people read them.” That hurts Carolyn, that really hurts.

So if I ever accidentally–or on purpose–call the show BookJack Horseman now you know why.