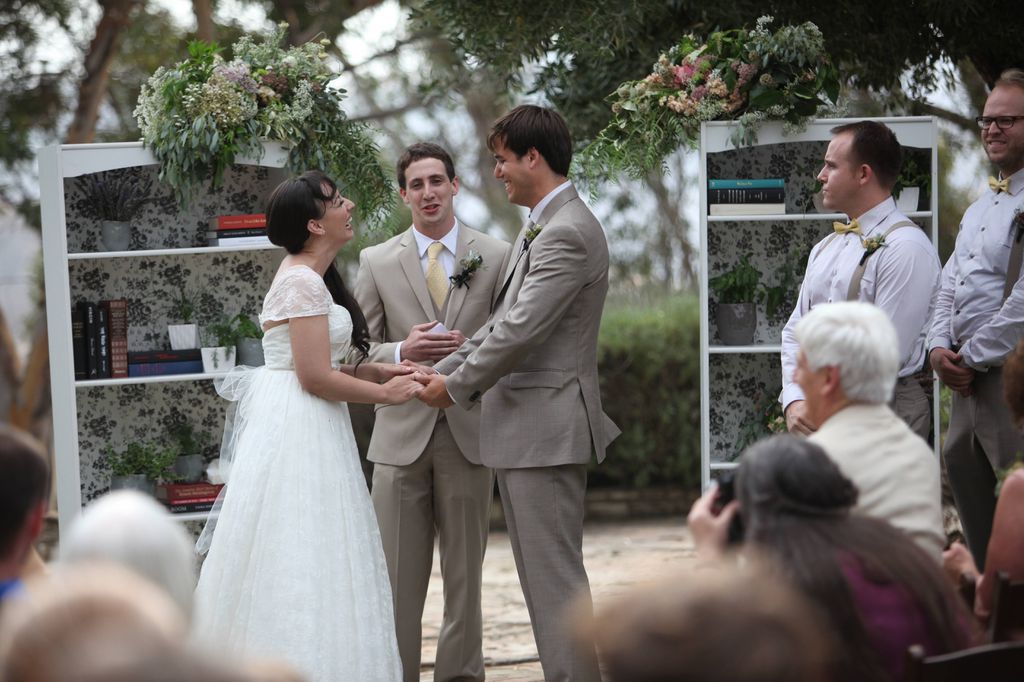 I got married this past summer, and I felt like I lucked out hard in the wedding traditions department because, well, I wasn’t FORCED to do any traditions I didn’t want to do. So my brother officiated instead of a religious figure, we did ice cream instead of cake, our vows were more like mushy-gushy love poems for each other than “I promise to do A, B, C, D, E, F, and probably G.”

My favorite thing was making up traditions for my wedding (or HEAVILY adapting traditions), and because books were, if not the theme of the wedding, then certainly a huge motif, books played into the traditions I made up in a huge way. Below, some of my favorites:

1.) We Got Married Between Bookshelves

I’m Jewish (well, more like Jewish-ish), and in traditional Jewish weddings, the couple gets married under a tent called a chupah (not CHOO-PAH like those slutty lollipops from the 1990s, it’s Jewish so the first syllable is that trying to hock-a-loogie-in-the-way-back-of-your-throat-sound-you-only-have-to-use-when-you’re speaking-Hebrew CCCCHHHH-UH-PAH). The chupah is supposed to represent the couple’s first home together, and I had this idea of using a different symbol to represent our home, specifically (drumroll please, ba-da-da-da-da-da-da-da) two bookshelves filled with books from our apartment. It was actually kind of a pain in the ass getting the logistics of this to work. (What about wedding logistics ISN’T a pain in the ass? Why are napkin colors a THING THAT’S IMPORTANT???) But it all came together on the day and I loved getting married between bookshelves (the kind of love where you cry snot down your face the entire time, but of course).

2.) We Had A Book Girl Instead of a Flower Girl

I didn’t have a cake because of literary reasons (wedding cakes make me think of Miss Havisham’s rotten, vermin-infested cake and I just can’t, you guys, I just cannot), and I didn’t have a flower girl because it just felt like this impersonal tradition I had no connection to or vested interest in. Also, I love crushing little girls’ dreams (YOU try explaining to a four-year old Acolyte of All Things Pink they’re not going to toss flower petals at your wedding, YOU do it). We only had one close kid relative between the two of us ( a niece on his side), so we decided to combine flower girl/ring bearer roles and have her carry the rings down the aisle on a pillow tied to a stack of three books that we have read together and loved together over the course of our relationship: If on a winter’s night a traveler by Italo Calvino (I wrote about me/now-husband’s story with this book in a previous BR piece), The Wind-Up Bird Chronicle by Haruki Murakami, and One Hundred Years of Solitude by Gabriel Garcia Marquez).

We still have the books all tied together sitting on top of our bookshelf. We’re never going to untie those books. BECAUSE OF SYMBOLISM.

3.) Everyone in the Wedding Party Got a Literary Thing to Say During the Ceremony

Okay, I obviously didn’t MAKE UP the tradition of people doing readings during a wedding ceremony, but I did tweak the idea of readings a little and had my now-husband pick out short literary readings about love and such for each of his groomsmen, I did the same for my bridesmaids, it was a jolly mix of Rilke and Robert Bly, Richard Brautigan, Ellen Bass, and Cheryl Strayed, and all those writers together managed to capture how my now-husband and I felt about getting married to one another.

4.) We Had Bookish Centerpieces With Illustrated Covers Documenting Our Adventures

I love when couples name reception tables after places they’ve been (table numbers are fine too, I guess, but where do you want to sit, really, Table 3 or Table PARIS, FRANCE, CITY OF LIGHTS AND L’AMOUR?). So we named our tables after places that were meaningful to our relationship. And then my sister, who’s an ace-plus illustrator, designed book covers for each one of these places as centerpieces (to the left-left the cover of our UCLA table, picturing the time my now husband found my lost keys on campus in pouring rain, to the less-left, the put-together-centerpiece-stack from the Galapagos table). There were some flowers too, it’s hard to do centerpieces without flowers, but it was so rad to make our centerpieces that specific and personal instead of just throwing a bunch of peonies at the problem.

Anyone else have a bookish wedding (or planning one, ooh la la la!)? What bookish traditions sprung forth from your skull all clad in armor and weaponry bellowing a mighty war cry?