Several years ago, after a lovely day poking around the sweet little town of Port Townsend, I suggested a stop at the Goodwill on the way home. It wasn’t until we pulled into the parking lot that I learned that my grumpy professor pal had never in his life been in any kind of thrift store. I wasn’t sure whether that was because he was Canadian or because he was eccentric.

He needed some encouragement.

“Anything you could ever want, buddy, it’s here! Because someone had that coveted item once, and gave it away.”

While I was checking out the skirts, he went off to look at “manly” things, but sneakedy-sneaked up behind me a few minutes later and whispered in an ominous tone, “I presume… the people who used to wear these things… are now dead.”

He wandered off again, morose.

Later, looking through the dress section—where, by the way, I found a terrific little number for six bucks, score!—he appeared behind me again.

“Do you think they keep despair and broken dreams in separate aisles, or are they over there with the traumatic childhoods?”

Then he groaned and said, “I mean, there’s a whole aisle of knick-knacks that used to be on some grandmother’s mantle, but she’s probably dead now. Jesus. It’s just so sad. Someday my cute little Christmas ornament with the penguin playing guitar on it is going to be on one of those shelves, too.” Then he sighed, looked around, and said, “At least there are bras over there.”

(It will likely not come as a surprise to you, reader, given his outlook and mien, that this grumpy professor is an adjunct. And I mean the gloom, not the bra comment.)

I mostly hang out in the book section these days, and here are a few sillies I spotted the last time I nipped over. 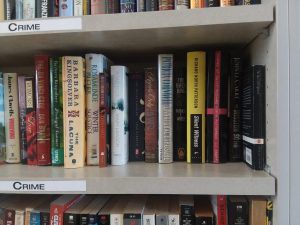 Gilgamesh! What have you done?

ONE: Once my kids named their betafish Gilgamesh & Enkidu, so I’m always on the lookout. I never expected old Gilg to show up here in the crime section.

My son didn’t think this was funny. (“You be you, Mother.”) So maybe you’ll have to trust me on this. 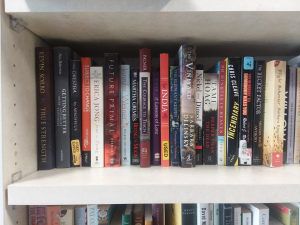 TWO: I like to imagine the English majors on staff are trolling us. For instance, when one finds, say, Erica Jong’s Fear of Flying, Parker Palmer’s The Courage to Teach, and The AA Handbook along with Aeschylus’s, The Oresteia. Again. In the crime section. 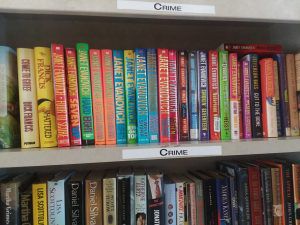 THREE: Oh, Janet. I always wonder when I see a whole collection of books by one author. I like to imagine that someone was a huge fan and their kids, getting ready to move her into the nursing home, were like, “Mom, you gotta let this go.” Although, sometimes it’s obvious that a library has done a purge, as in this case. Bonus here, The Matchmaker of Kenmare. Way over on the end.

PS: Don’t you just want to rainbow-ize the Janet Evanovich? I do.

FOUR: Dear Diary. Sometimes you find things misplaced entirely. Like this journal in the dead-grandmother’s-mantle-knick-knacks section. 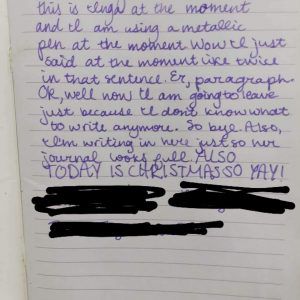 Oh! To be fourteen again, and to glory in the sparkly purple pen!

“Samantha’s journal 🙂 this is Inga at the moment and I am using a metallic pen at the moment. Wow I just said at the moment like twice in that sentence. Er, paragraph. Ok, well now I am going to leave just because I don’t know what to write anymore. So bye. Also, I’m writing in here just so her journal looks full. ALSO TODAY IS CHRISTMAS SO YAY?”

This is all of us once.

The rest of the pages were blank.

FIVE: By this point, I was having PTSD flashbacks to middle school, but my honorary daughter, the one who turned me on to the Bible pimping phenomenon, wanted to check out the games. She works with kids in foster care and is always on the lookout. While she was trying to find a complete Apples to Apples, I snooped around.

“Becca, did you know that there are adult versions of Pictionary?”
“Isn’t it an adult game?”
“No, I mean, ADULT.”
“OH! Well. It can’t be any worse than DICK, which I think traumatized your children.”
“Hey.”
She should know that Moby-Dick is off limits.

And then I found it. Observation Deck. 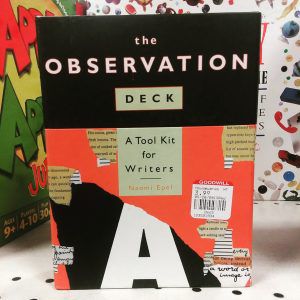 Becca came over to look, cocked her head to the side, then lifted it from the shelf. “Oh,” she whispered. “This is so pleasing.” She took the cards out of the box, the book, then said, “That’s it. I’m buying this for you.”

And she did. Bless her heart.

When I mentioned to Professor Grumpy McGrumperson that I wanted to share this story, he said, “Oh, great. That’s going to make me look like a perv.”

“That’s okay for *you*. I have my reputation to consider. GOD. This being a celebrity is really weighing on me.”

I believe he was sufficiently traumatized and has never again entered a thrift store.

Our gain. Because it’s not just the fact that you’ll find treasure at the thrift stores, and you will, it’s the delight, if you have the capacity for it, that makes these trips so worth it.