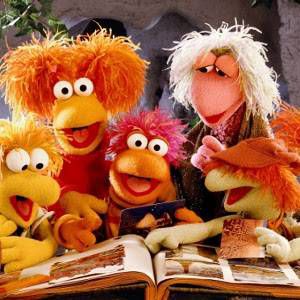 As you may already know, I watch a ton of Fraggle Rock because my twin toddlers are OBSESSED with it. They know all the songs, much of the dialogue, and more of the characters’ names than the names of their classmates at nursery school. Friends have told me that this shows I’m being a good mother, so I take that to heart.

Not surprisingly, I always keep an ear out for bookish/literary references in everything that I watch (which, at this point in my life, is basically Fraggle Rock and Farscape. Yes- I’m definitely getting my required dose of Hensen puppetry). And while there aren’t tons of bookish references in this delightful show, there are some, which are just wonderful. So close your eyes and think back to your childhood and what you remember of Fraggle Rock. Then tell me what I missed!

(By the way, have I mentioned that Margery the Trash Heap is my favorite character?)

*All images are from the Muppet Wiki 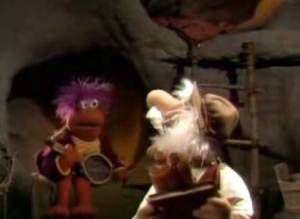 In this very first episode, we are introduced to Traveling Matt Fraggle, who sets off bravely into “Outer Space” to explore the world of the “Silly Creatures.” Because he doesn’t know how long that adventure will take, or what might happen to him, he leaves his journal and maps with his nephew, Gobo. So basically, our introduction to Fraggle Rock is in the form of a written narrative. According to Matt’s journal (which Gobo reads aloud), “The center of the universe is, of course, that marvelous land known as Fraggle Rock…” When Matt is finally ready to go, he charges Gobo with picking up the postcards that he intends to mail back with updates on his travels. These postcards (and Matt’s adventures) play a major role in each episode, always tying in somehow with the main story. So we may not know a whole lot about the Fraggles (i.e. why is Boober always washing socks when none of the Fraggles wears socks except for Matt?????), but we do know that they can read and write.

Episode 106: The Preachification of Convincing John 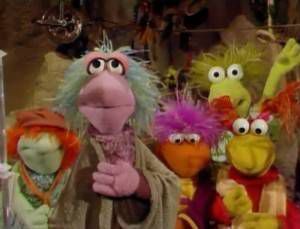 Mokie is the most literary of the Fraggles, so it’s no wonder that she’s always writing poetry and keeping a diary. This episode is presented as one of her diary entries, as she tries to explain why she first made the Fraggles swear off eating Doozer constructions, and then realized her mistake.

Episode 209: Sir Hubris and the Gorgs: 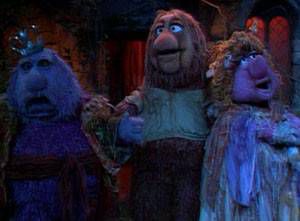 Ma Gorg decides that it’s time Junior learned about his Gorgish heritage, so out comes the book of Gorg lore! While Ma reads aloud about the legend of Sir Hubris (which states that when he returns, the Gorgs must leave their garden forever), Gobo formulates a plan to pose as Sir Hubris and convince the Gorgs that it’s time to leave. Yeah, that plan doesn’t work out so well. 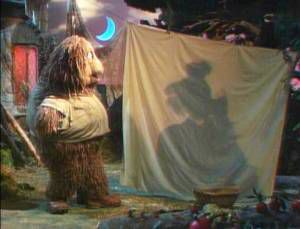 When Junior Gorg is faced with the prospect of banishment if he can’t successfully play the Royal Kazoo, he decides to try anyway, because he gave his oath. As he’s trying to decide what to do, he strikes a dramatic pose and says “To kazoo or not to kazoo…what is the answer??” Shakespeare woulda been proud. 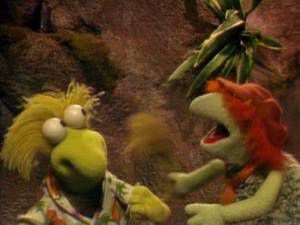 Margery, as we all know, is magical and the embodiment of wisdom and even has a cousin named Maximilian who spells his name with a “q” (“Maqsimilian”??). Anyway, in this episode, Madame Trash Heap is trying to read a book, but her two rat associates are busy arguing. They’re so loud, that she yells at them to pipe down, but their argument is about how to instruct Wembley in the art of scaring Boober silly. And we all know what it’s like to be deep in a good book and distracted by loud people. It’s infuriating and irritating. Poor Margery. 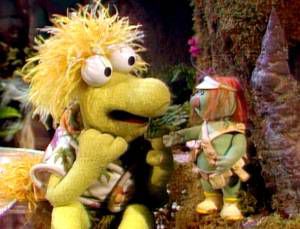 This episode about cross-species communication has a couple of…interesting bookish references. When Sprocket forgets to water the plant, Lucinda, Doc tries to revive it by talking to it. He claims to have gotten the idea from a book he once read, called You’re Ok, and Your Plant is Ok, Too, most likely a reference to the 1967 book I’m Ok–You’re Ok. Doc decides to tell Lucinda about himself, starting from his birth, and at one point talks about a science teacher he once had named Mrs. Raskalnikov. Hmmmmmmm… 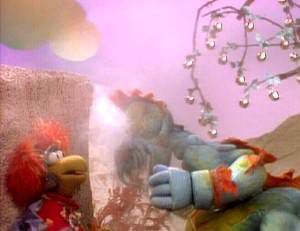 This episode opens with Red hanging around the entrance to Outer Space, soliloquizing about her adventures as the fictional Princess Gwenalot. When Gobo criticizes her for reading this fantasy series, Red hits back by claiming that Uncle Traveling Matt’s postcards are fictional, too. Red is even wearing a Gwenalot costume, which is perfect because she eventually does have a crazy adventure with a blue dragon and golden apples.