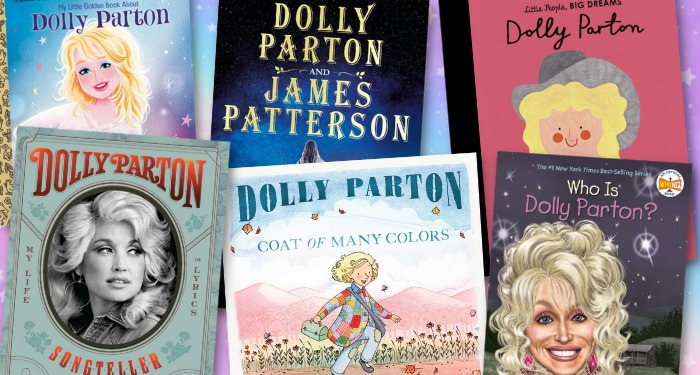 Dolly Rebecca Parton was born on January 19, 1946, in Pittmann Center, Tennessee. She was the fourth of 12 children born to Avie Lee and Lee Parton, a sharecropper who went on to run his own tobacco farm, supporting the family on the farm’s income supplemented by construction jobs. Her family had very little money — in her words, they were “dirt poor” — and this, along with the fact that her father Lee was illiterate, greatly influenced the course of Dolly’s bookish life. Her maternal grandfather was a pastor in the Church of God, which her family attended, and her faith has been an even greater influence on her life.

Dolly grew up surrounded by music and believing that although they had no money, they could not be poor when they had so much love. She wrote her song “Coat of Many Colors” about that very sentiment, telling the story of the coat her mother sewed for her from rags. Years later the song lyrics were illustrated by Brooke Boynton Hughes as the lovely picture book Coat of Many Colors.

Somewhere between writing the song and seeing it become a book, Dolly became wealthy, due in no small part to her own business savvy as not just a performer but a songwriter. When she wrote “I Will Always Love You” (which is about Porter Wagoner, who helped to jump-start her career), Elvis Presley wanted to sing it; Colonel Tom Parker informed Dolly that she’d have to sign over 50% of the rights to the song and she declined — and has earned millions of dollars in royalties from just that song, not to mention many others. (Her current wealth is estimated at half a billion dollars.)

Not for a moment forgetting her roots, Dolly founded Dolly Parton’s Imagination Library in 2005. Founded to honor her father, the Library sends free books every month to any child under age 5, at first in her home county of Sevier County, Tennessee, and expanding nationwide in 2000. The program is now international, also serving Canada, the United Kingdom, Ireland, and Australia. In May 2022 the Imagination Library distributed 2,023,258 books, bringing the total over the last 27 years to 182,571,673 (and counting)! It was only four years ago, in 2018, that the Library of Congress honored Dolly for the 100 millionth book donated.

Dolly’s other philanthropic ventures through her Dollywood Foundation, which manages the Imagination Library, have mostly been related to healthcare, with some focus on animals. She has donated and raised money to build a hospital in her home county, to support HIV/AIDS care and research, and for pediatric cancer research, not to mention $1 million to help develop the COVID-19 vaccine. She’s loaned her music to PETA campaigns and partnered with the Bald Eagle Foundation to build a sanctuary at Dollywood, her theme park in Tennessee, preserving our national bird. And after the 2016 Smoky Mountain wildfires, she participated in two telethons to raise money as well as personally giving every affected family $1,000 a month for six months, with a $5,000 gift at the end for a total of $10,000 to help them get back on their feet.

Because she apparently believes that any-old-body could be the greatest living country music star and one of the most generous human beings on earth (no one is making me say that), Dolly also acts and writes. Although her movie roles have not been particularly bookish, several are based on plays, including Steel Magnolias. She also contributed new songs to the 2018 movie adaptation of Dumplin’ by Julie Murphy, in which the main character is a huge Dolly Parton fan.

Her books are Just the Way I Am: Poetic Selections on “Reasons to Live, Reasons to Love and Reasons to Smile” from the Songs of Dolly Parton, My Life and Other Unfinished Business, Coat of Many Colors, Dolly’s Dixie Fixin’s: Love, Laughter and Lots of Good Food, I am a Rainbow, Dream More: Celebrate the Dreamer in You, Songteller: My Life in Lyrics, and Run, Rose, Run, a thriller co-written with James Patterson.

And as if all that isn’t enough, Dolly is a staunch ally of LGBTQ+ people. Dolly Parton, we salute you and your bookish life! We know this dumb blonde ain’t nobody’s fool.