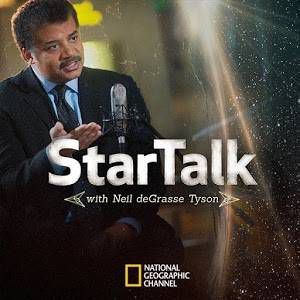 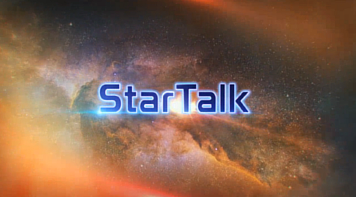 I don’t consider myself very “science,” but I do like Neil deGrasse Tyson, which is why I initially started watching StarTalk–basically deGrasse Tyson’s podcast in TV form. I kept watching, and loving, StarTalk because it occasionally veers into bookish territory. The episode with Dan Savage, about the science of love and sex, was fascinating all on it’s own but especially for romance readers; the one with Arianna Huffington veered, unsurprisingly, into discussions of mass media, blogs, and digital reading; and how Twitter affects writing and communication was a subtopic of an episode featuring Biz Stone, one of the founders of Twitter.

All that said, there’s definitely more room for bookishness on the talk show “where science and pop culture collide.” Here are my suggestions for some bookish guests deGrasse Tyson could have on–what are some of yours? 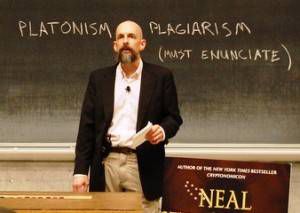 Neal Stephenson— Stephenson is an obvious choice to be on StarTalk. His geek cred is through the roof, and he basically predicted the Internet (or at the very least, how the Internet would work). Of course, Stephenson doesn’t like to talk about that in interviews, so maybe he could discuss the science behind his numerous books, such as Seveneves. Or venture into Doc Dubois’ astonishing similarity to deGrasse Tyson himself.

Laline Paull — Paull’s The Bees is a novel that anthropomorphizes and dramatizes the thankless life of the lowly worker bee. It may seem a very human story, but it’s 100% based on real biology. Paull would be a fascinating guest to talk to about entomology, evolution, survival, and even the phenomenon of humans identifying with animals. 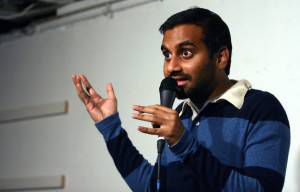 Aziz Ansari— For a “comedy book,” Ansari’s Modern Romance is surprisingly science-y. It takes a look at the intersection of technology and love, using cross-cultural test subjects, and is laid out with a strong lean toward the collection of empirical data. Of course, Ansari turns it from data into entertainment, just like deGrasse Tyson often turns astrophysics into something entertaining. As a bonus, Ansari’s spot on The Tonight Show proves he is a hilarious, kick-ass talk show guest.

Marie Kondo— As my Modern US History prof was fond of saying, Americans love their stuff. Perhaps that’s why Kondo’s The Life-Changing Magic of Tidying Up is a legit phenomenon in the US now. The book opens up all kinds of questions surrounding the science of stuff: Why do we keep all the stuff that we do? What do our trash and treasures say about us as individuals and a community? Why does Kondo believe stuff is tied to how people live versus how they want to live? I’d really love Kondo to be a guest on StarTalk! 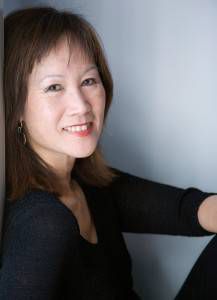 Tess Gerritsen— You’ve probably heard about deGrasse Tyson’s tweet storm in which he fact-checked the movie, Gravity, to the film’s detriment. But did you know Gravity is actually based on a book of the same name by Tess Gerritsen? If you didn’t, it’s not your fault–Warner Bros refuses to give Gerritsen credit or compensation for the film, in violation of a contract Gerritsen signed with New Line back in 1999. Having Gerritsen on the show would give deGrasse Tyson an opportunity to dig into issues of genetics, contagion, alien life forms, and possibly delve into issues of copyright and intellectual property.

Andy Weir— DeGrasse Tyson is obviously going to see The Martian. And yeah, he could have Matt Damon or Ridley Scott on StarTalk as a hey-go-watch-this-movie promo and that would be cool. But! Why not have the author of the book the movie is based on, instead? The Martian was called “basically a giant advertisement for NASA” in Wired, and has propelled Weir into the nerd pantheon due to his meticulous research and application of science and math. Weir even reportedly wrote his own programming to calculate the orbital patterns of spaceships for the book. He’d be a fantastic guest not just to promote the movie The Martian, but to promote a human-manned mission to Mars as well. Not to mention the role of math and engineering in space exploration.