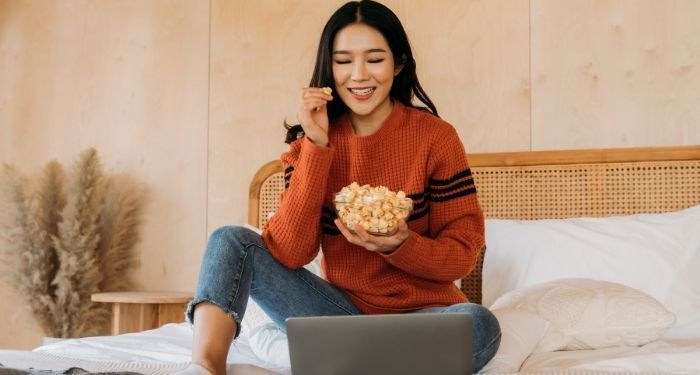 I love books. I love documentaries. I love bookish documentaries! In my early 20s, there was no such thing as streaming. If I wanted to watch a bookish documentary, I had to hope and pray our local indie theater would show it, or hope that Blockbuster Video was going to let me rent it. If I wanted to buy a VHS of my favorites, I had to head down to Tower Records. If they didn’t have it? Too bad, so sad. There was no “buying it online.”

But now, we can all stream just about anything we want just about any time we want to! I am just as guilty as the next person of taking this for granted and sighing when I have to pay a whole $1.99 to stream a film. How dare they! Kids these days! Adults these days! I don’t even know who I’m shouting at anymore!

I want to get back that total awe and wonder at being able to press a button in my living room and seeing a moving talkie come to life. I mean, back in the olden days, before home video, you couldn’t even watch a movie with your dog or cat. How depressing.

Of course, now we have the opposite problem. There are so many dang bookish documentaries out there that it’s hard to decide which one to watch. So I’ve made it easy for you – just fill out this super-fun quiz and I’ll tell you what to stream.

You should watch Kurt Vonnegut: Unstuck in Time and learn about not only Vonnegut’s life but also his extraordinary friendship with the filmmaker. There is no one else who could have made this movie, which the filmmaker had been making for decades before Vonnegut’s death.

You should watch Maya Angelou: And Still I Rise. This episode of American Masters on PBS weaves her words with archival photos and video. Covering everything from her upbringing in the Depression-era South to her work with Malcolm X in Ghana, this is a film that does its very best to get to the heart of an iconic American.

You should watch Half the Sky: Turning Oppression into Opportunity for Women Worldwide. Based on a book by the same name, this two-party Independent Lens documentary covers the linked problems of sex trafficking and forced prostitution, gender-based violence, and maternal mortality. While the topic is heavy, the film focuses on stories of hope and opportunity.

For more fun, bookish quizzes, check out our quiz archive.