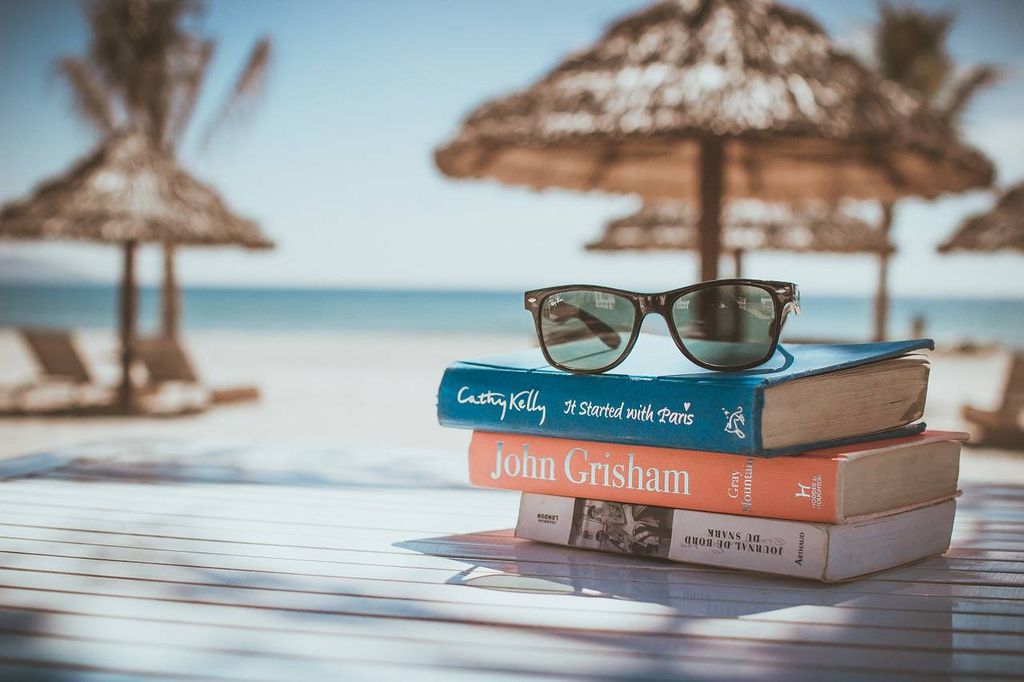 Vivienne Woodward lives in Philly and works as the events coordinator for an indie bookstore. She can often be found drinking too much coffee in the sunny spot on her couch and over-identifying with fictional characters. She enjoys collecting hobbies, dancing to radio pop, and rearranging the book stacks on her side tables.

You may not have realized it yet due to the four consecutive weeks of rain we’ve had here on the East Coast, but beach season is almost upon us. And if you haven’t heard: summer bodies are made in the winter. I personally spent the winter on my couch reading with my book balanced comfortably between my stomach and a bowl of raisin bran. This won’t cut it come beach season, but hey, we all get complacent. If you haven’t started preparing for beach season yet, you’re probably too late. There’s only so much you can do at this point, but you can’t not try. Below you’ll find a prep guide to the three B’s of bookish beaching: body, book, and bag.

You’ve spent the winter sipping your hot cocoas by the fire, wearing your finest wool socks, and reading your heaviest tomes from the comfort of your sofa lounger. First things first: you’re going to need to take the socks off. As nice as they’ve been for your book in bed Instagrams, the indent permanently etched mid-ankle for the last eight months could take weeks to disappear and the color might not fully return to your feet for days.

Next, swap out your hardcover volume of Jane Eyre for something lighter—you haven’t used your arms in months and this is no time for an injury. Try something slim and in paperback—maybe it’s time you read Franny and Zooey; a George Saunders short story collection would also do well. Lay down on your back and—slowly now—lift and hold. We’re going for endurance here. Your arms should be perpendicular to your body and, ideally, angled to allow your book to block any sunlight from reaching your face. You can attempt this one-handed, but page-turning can be a real challenge for all but the most experienced.

I recommend holding this exercise until your arms give out. From there, turn to your stomach and try to find a comfortable angle to rest your chin on your arms and still see your book. Repeat from step one until you eventually fall asleep or throw in the (beach) towel and go inside to read from the comfort of your bed. You can do it!

Where the winter is all about introspection and staying inside, the summer is for freakin’ beach reads. Let me be clear: there are winter reads and then there are summer reads. Not hip to the difference? You’ve obviously never done marketing for a publisher or bookstore. Here’s a hint: they’re the same books, except for one thing: they’re out in paperback, girl!

Those hardcovers you put off buying in November? They’re about to hit a window display in paperback and you need to be prepared to snatch up those sea blue spines—the perfect complement to an ocean backdrop.

The beach bag itself is the most important thing here. If you’re not carrying a free tote bag from a literary event you recently attended, there’s not much I can do for you. Publishing all but shuts down in the summer and you’d be lucky to get one past May. Your next best option would be to buy a tote with your local indie’s logo all over it.

Once you’ve gotten your bag situation sorted, you’ll want to fill it with the following items: aforementioned beach reads—at least two to three at all times; sunscreen—chances are you’ve spent the last eight months indoors and falling asleep with your book on your stomach would be a disaster; headphones—never underestimate the distraction power of five year-olds experiencing sand for the first time. Don’t let them ruin Sing, Unburied, Sing for you (it just came out in paperback).