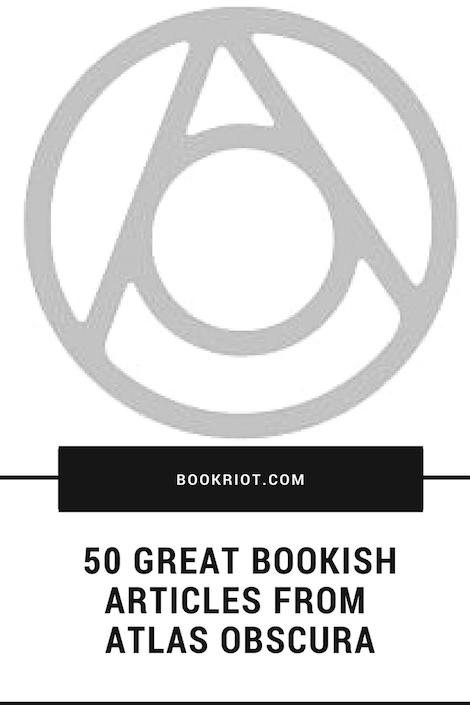 One of my favorite sites on ye old web is Atlas Obscura. For readers unfamiliar, it’s a site that bills itself as “the definitive guide to the world’s wondrous and curious places.” I like to think of it as the website where I get cure some of my wanderlust, visiting some of the coolest and weirdest places from the comfort of my own home.

Beyond travel, though, Atlas Obscura has published numerous pieces about books, about reading, and about historical bookish life that have always been among some of my favorite reads. The site is a treasure trove for book nerds.

Here’s a round-up of 50 of the site’s most interesting, engaging, evocative, and downright weird features perfect for book lovers. I’ve not included everything Atlas Obscura has included in their destinations, so spending a little time poking around their map of cool places is well worth your time.

8 Places From Shakespeare That You Can Actually Visit

The Banned 1910s Magazine That Started A Feminist Movement In Japan

Bibliomania, The Dark Desire For Books That Infected Europe In The 1800s

Book Towns: Where Reading Is The Reason To Live

How Nigerian Romance Novelists Sneak Feminism Into Their Plots

The Past and Future of Magnetic Poetry, The Populist Product That Began With A Sneeze

The Russian Poetry Scandal That Ended In A Duel

The Saga of a Long-Lost 15th Century Illuminated Prayer Book

See a 400-Year-Old Book Made Entirely From Feathers

See The Most Luxurious Medieval Manuscripts in Existence

Why Fake Diaries Can Be As Powerful As The Real Thing

Why The London of British Literature Barely Changed For 200 Years

A Jordan Bookseller’s 24-Hour “Emergency Room For The Mind”

The Forgotten Government-Funded Kids Books Of the Great Depression

The Secret Jokes Hidden in Alice in Wonderland

These Hand-Drawn Maps Helped Create ‘Choose Your Own Adventure’ Books

The Fierce, Forgotten Library Wars of the Ancient World

Get Lost In The Stacks of These 10 Beautiful University Libraries

Inside The Most Amazing Map Library You’ve Never Heard Of

Inspiring Libraries In The Most Unexpected Places

Libraries On The Beach

The Oldest Treasures From 12 Great Libraries

The US-Canada Border Runs Through This Tiny Library

The Women Who Rode Miles On Horseback To Deliver Library Books

How Novels Came To Be Written in the Voice of Coins, Stuffed Animals, and Other Random Objects

The Strange History of Microfilm, Which Will Continue To Be With Us For Centuries

The True Practice of Binding Books in Human Skin

The Unsung Delight Of a Well-Designed Endpaper

Watch A Book Being Made The Old Fashioned Way