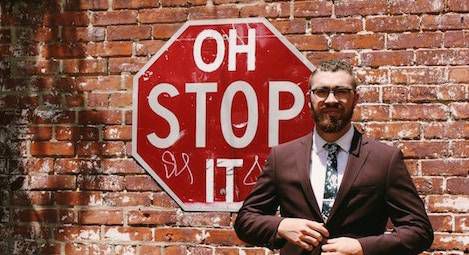 Tropes can many times be comforting, you know what you’re getting and you like it. Often times they can also serve as a flag that lets you easily steer clear of reading something you’re not a huge fan of–sorry love triangles, I love the New Order song but not so much the trope. Sometimes you just wish a trope would go play in traffic.

I originally began writing this because I’ve really reached my fill with the recent trope where the woman being the killer is the actual “twist” in thrillers. There’s a lot to unpack, starting with our society’s view of violent women. There’s also the issue that the trope has made it where I always know the “twist” before I even open the book. But then I managed to read two books and watch a mystery show in succession that all managed to have the same super icky trope. Since then everything in me has been screaming: I really hope this doesn’t become a thing. I’m so not a fan that I haven’t even written what it is yet because I don’t even want to say it!

But I guess I have to so here goes: The brother and sister being in an incestuous relationship is the “twist.” If you can even get over the gross factor, the biggest problem is it’s always done for shock value and nothing more. I’ve never seen it–not really saying I want to–done where it’s even explored as to why or how it would happen. It’s always just the shocking twist and that’s it. Coming across it three times in the same month is enough for a lifetime so can we please not make this a trope dear publishing and writers?!

And now I’m curious what tropes Rioters are well and done with so I asked them:

The-off-limits-romance: I’m mainly talking about how IT’S PRACTICALLY A CRIME to date your best friend’s sister or maybe your brother’s BFF. If everyone is a consenting adult and can act maturely, I honestly don’t see the big deal. There are also some cases where I think it’s gross, as if a brother has any claim in overseeing his adult sister’s romance prospects. If my brother came to me and forbade me to date someone, I’d laugh in his face. Normally, if I get any whiff of this trope in romance, I avoid the book completely because, in a contemporary setting, the basis of the trope just seems a little misogynistic, presumptuous, and rude. It also has a tendency to infantilize the heroine because she clearly can’t make her own decisions regarding the romantic partner she wants in her life. —Amanda Diehl

Girl’s-Life-Changes-Because-of-a-Boy: The main girl character of a (usually) YA Novel has a boring or unfortunate life. Or, they aren’t awakened to the disastrous circumstances of their dystopian society. That is, until they meet the boy that changes everything. I’m tired of the idea that a girl’s story doesn’t start until she meets a cute boy, and then the story revolves around him. —Mya Nunnally

Women can only be sympathetic if they’re attractive: This pops up everywhere, but I’m especially peeved by this trope in the novels of T.C. Boyle, who’s such a staggeringly talented writer that he should be able to avoid this trap. His characters are richly detailed and complex, but the women only allowed to be likeable if they’re good-looking…and boy do the narrators and other characters take pains to let the reader know how good-looking these women are. If a dumpy or plain female character is introduced, you can be sure that she’ll end up being witchy or useless. We see this in Disney movies, sure, but to also see it in excellent literary fiction is extra disappointing. —Christine Ro

Mental Illness as a Quirk: Don’t get me wrong. It is so important to see mental illness accurately represented on the page. That can make a big difference in breaking down stigma. But if I see one more book that uses mental illness as something to make a character look oh so cool and weird–or worse to make the character seem star-crossed and fated for doom (I’m looking at you, Jennifer Niven)–I will defenestrate the book, the person reading the book, the editor, the publisher, the bookseller, and the author. So let’s defenestrate this trope instead before I throw everyone involved out of a window. —Rebecca Renner

Unreasonable, asshat male is unreasonable because of personal trauma: There are so many cases of these out there, irrespective of genre–I’ve seen this happen in romance, detective fiction, literary fiction… you name it. The male character (often the protagonist) is rude, arrogant, and utterly condescending (almost always towards the female character/s) and the reader is supposed to see it as justified because he has obviously gone through some hard times, and now this is just a ‘quirky’ personality trait that the female characters are supposed to a) learn to love and admire or b) try to cautiously change through affection, thereby replacing his traumatic memories with better ones. Just no. We are not here to legitimize or pave the way for your character to shine. —Deepali Agarwal

Trinity Syndrome: Why is it every piece of media about a dude has got to have an amazing woman who is far more capable of him in every possible way… who someone ends up damselled in the third act? It’s almost as if the dudes writing these stories don’t realize they have incredible characters right in front of them who are already capable of doing everything their Gary Stu protagonist has to learn in a craptacular training montage. Next time, maybe just skip the white dude character altogether. —Charles Paul Hoffman

Exploiting rape as a horror plot point: Horror can be a really effective way to work through real-life fears and anxieties, or to showcase these fears in a new light, and I’ve read (and watched) stories that dealt with rape and the violation of the female body in a really effective and powerful way.  However, I read a horror novel last year where a woman was brutally gang-raped by a group of half-human monsters and I wanted to chuck it across the room. The scene was gratuitous, pointless, and only served to weaken an already two-dimensional, stereotypical female character. And then – get this –  the author addressed the scene in the afterword, saying that he debated about whether or not to include the scene, and ultimately decided to keep it because it fit with the rest of the story. As a woman, I deal with anxiety on a daily basis about whether or not I’m safe in my own body, and this author exploited that fear as a cheap plot point for what I can only assume is a predominantly male audience. If you’re an author (especially a horror author) who casually drops a rape into your novel just because you can, I’m going to drop kick your book through a window. —Katie McLain

Now that we’ve gotten those off our chests is there a trope you’re well and done with? One you avoid like the plague?