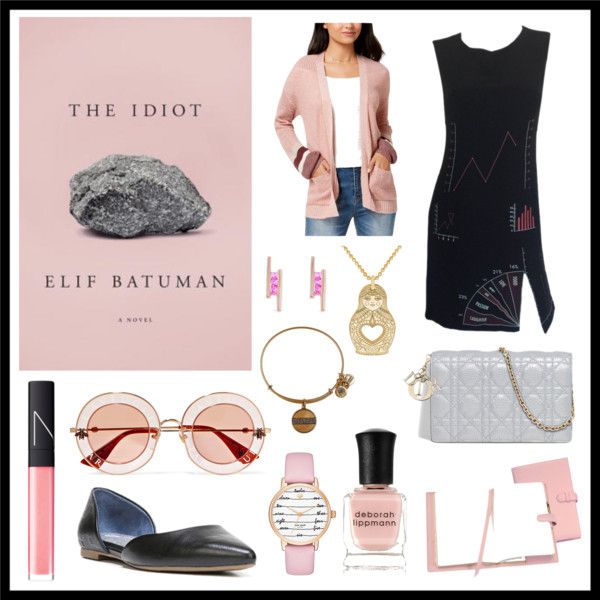 Elif Batuman’s The Idiot was chosen for more than one “Best Cover of 2017” list and for good reason, too. The simplicity of the design harks back to mid-1990s minimalism, which is fitting since the novel is set smack in the heart of that decade: 1995. I also think the dusky, baby pink color choice is perfect for conveying the angsty, uncertain first love of the semi-autobiographical protagonist, Selin. Batuman does a fantastic job of conveying that weird sensation of discovering yourself during the transition to adulthood in college. I actually think Selin comes through the process less scathed than I did, personally.

For this Book Style, I wanted a modern ’90s minimalism look. I started with a vintage Moschino dress printed with mathematical charts and diagrams since Selin’s love interest, Ivan, is a math major. The delightfully collegiate pink cardigan is from Freshman, fitting as the story centers around Selin’s freshman year and the summer after. The shoes, “Svetlana” flats, are a nod to Selin’s roommate. For accessories I chose a pair of rose-colored glasses (literally) inscribed with “L’AVEUGLE PAR AMOUR” which translates to “blind for love.” I also sought inspiration from the it bag of 1995, and something Selin could’ve splurged on in Paris: the Lady Dior. For the outfit, I went with a gray wallet-on-a-chain version. The jewelry consists of Russian doll necklace for the Russian class where Selin and Ivan met, a pair of ruby studs from Selin Kent, a Harvard bangle since it is the setting of most of the book, and a writerly watch from Kate Spade. Playing on the writerly theme, which is Selin’s destiny, I also included a notebook for her to carry on her travels and to class. Finally, the makeup consists of “Turkish Delight” lipgloss for Selin’s Turkish parentage, and “Baby Love” nail lacquer.