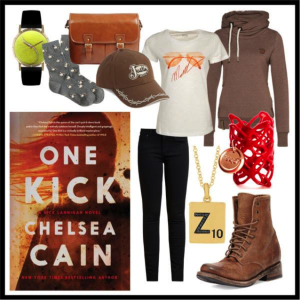 This is a guest post from Brandi Bailey. Brandi was weaned on Nancy Drews and has a decided fondness for all things British. She makes her living selling books in Seattle and spends her free time being a crazy cat lady and curating a wardrobe she’ll never be able to afford. Follow her on Twitter @pinkBBwhiskey.

Welcome to the very first Book Riot Book Style! Combining the symbolism from novels with some stunning cover designs to create (marginally) character-appropriate outfits has been an outlet of mine for over a year and now I get to bring it to all of you fellow Rioters. I’m a self-professed cover snob. While I’ll read a book that has cringe-worthy cover art if it’s pitched to me properly, I really do judge a book by its cover, which is pretty much how this project began. Getting to window shop some drool-worthy fashion is a nice little perk, too. Think of this as Disneybounding but with books!

I fell in love with Chelsea Cain’s work back when I discovered her Nancy Drew parody, Confessions of a Teen Sleuth, which is now sadly out of print. While I never became as impassioned about her Heartsick series as some of her fans, I’m incredibly thrilled with the launch of her newest novel and series. One Kick is the first of the Kick Lannigan series and if you’re a fan of thrillers you better get off your butt, run out to your local bookstore, and bring one home now. To paraphrase The New York Times review, Kick is comparable to Lisbeth Salander (you know, of The Girl with the Dragon Tattoo fame), but way more relatable. She’s a survivor of kidnapping and child pornography. Almost a decade later, Kick is presented with an unprecedented opportunity to help rescue other children from the same circumstances.

I gave my best effort to keep this outfit fairly true to Kick’s in-novel attire (even when faced with an incredibly sepia-colored cover). She’s a tomboy who lives in denim and hoodies when she’s not training in the dojo. Her tragic tale made her into a celebrity, something her mother continues to exploit, and Kick often sports a cap and glasses to avoid the curious stares of her neighbors. The puppy dog socks aren’t something Kick would let show to many, but they accurately reflect her undying affection for her dog, Monster. The handcuff bracelet is symbolic of her imprisonment as well as her hobby of lock-picking. The tennis ball watch is a bit kitsch but it’s also a nod to Monster and the events that get the plot rolling. The final touch is the Scrabble tile necklace. I’m not going to tell you how that ties in! I don’t want to spoil the suspense.
____________________