Riot Headline What Is Going On With Barnes & Noble?
This content contains affiliate links. When you buy through these links, we may earn an affiliate commission.
Award-Winning Adventure Writer A.W. Baldwin 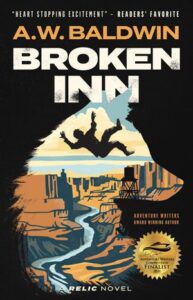 $2.99 Every Heart a Doorway by Seanan McGuire
Get This Deal
$1.99 A House is a Body by Shruti Swam
Get This Deal