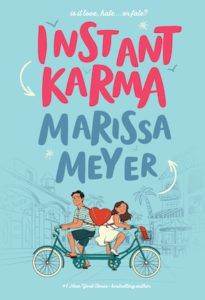 Today's edition of Daily Deals is sponsored by Instant Karma by Marissa Meyer with Fierce Reads.

What I Know For Sure by Oprah Winfrey for $2.99

The Paris Architect by Charles Belfoure for $3.74

A Wolf at the Table: A Memoir of My Father by Augusten Burroughs for $1.99

The Cactus by Sarah Haywood for $2.99