This content contains affiliate links. When you buy through these links, we may earn an affiliate commission.
Themes and Variations by David Sedaris. 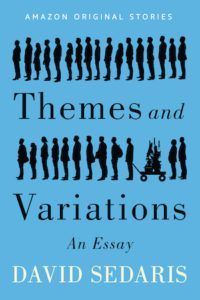 Today's edition of Daily Deals is sponsored by Themes and Variations by David Sedaris.

$1.99 Aurora Rising by Amie Kaufman and Jay Kristoff
Get This Deal
$2.99 The Royal We by Heather Cocks and Jessica Morgan
Get This Deal

The Paragon Hotel by Lyndsay Faye for $1.99

Wicked and the Wallflower for $1.99

A Study in Scarlet Women by Sherry Thomas for $2.99

Searching for Sylvie Lee by Jean Kwok for $2.99

An Extraordinary Union by Alyssa Cole for $2.99

Jonathan Strange and Mr. Norell by Susanna Clarke for $1.99

Evening in Paradise by Lucia Berlin for $2.99