This content contains affiliate links. When you buy through these links, we may earn an affiliate commission.
Forever and Kate Spencer’s In a New York Minute 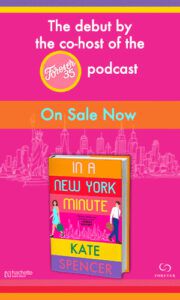 This edition of Daily Deals is sponsored by Forever and Kate Spencer’s In a New York Minute.

The Wedding Party by Jasmine Guillory for $1.99

An Anonymous Girl by Greer Hendricks and Sarah Pekkanen for $2.99

That Summer by Jennifer Weiner for $2.99

Mad and Bad: Real Heroines of the Regency by Bea Koch for $3.99

All This Could Be Yours by Jami Attenberg for $2.99

Darius the Great Is Not Okay by Adib Khorram for $2.99

The Queen's Assassin by Melissa de la Cruz for $2.99

A Declaration of the Rights of Magicians by H.G. Parry for $2.99

The Beautiful Ones by Prince for $2.99

The House of Silk by Anthony Horowitz for $2.99

In the Company of Witches by Auralee Wallace for $1.99

Diary of a Drag Queen by Crystal Rasmussen for $2.99

The Tiger Came to the Mountains by Silvia-Moreno Garcia for $0.99

These Witches Don't Burn by Isabel Sterling for $2.99

Last Night at the Telegraph Club by Malinda Lo for $2.99

Seventh Heaven by Alice Hoffman for $2.99

Hollywood Homicide by Kellye Garrett for $2.99

It's Not All Downhill From Here by Terry McMillan for $2.99

Our Woman in Moscow by Beatriz Williams for $2.99

The Silver Star by Jeannette Walls for $2.99

Speak by Laurie Halse Anderson for $2.99

K-pop Confidential by Stephan Lee for $1.99

Read Between The Lines by Rachel Lacey for $1.99

The Less People Know About Us by Axton Betz-Hamilton for $3.99

Mango and Peppercorns by Tung Nguyen, Katherine Manning, and Lyn Nguen for $2.99

The Invisible Library by Genevieve Cogman for $1.99