This content contains affiliate links. When you buy through these links, we may earn an affiliate commission.
Flatiron Books, publisher of The Flatshare by Beth O’Leary. 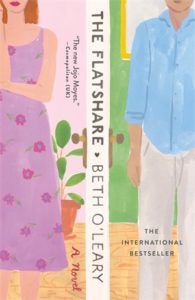 Today's edition of Daily Deals is sponsored by Flatiron Books, publisher of The Flatshare by Beth O’Leary.

Inimations by Zadie Smith for $4.99

Red at the Bone by Jacqueline Woodson for $4.99

The Great Gatsby by F. Scott Fitzgerald for $0.99