This content contains affiliate links. When you buy through these links, we may earn an affiliate commission.
Little Universes by Heather Demetrios with Fierce Reads 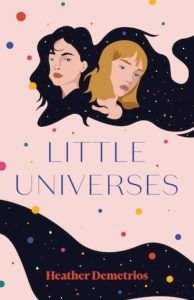 Today's edition of Daily Deals is sponsored by Little Universes by Heather Demetrios with Fierce Reads.

$2.99 Killers of the Flower Moon by David Grann
Get This Deal
$3.99 The Nickel Boys by Colson Whitehead
Get This Deal

The Starless Sea by Erin Morgenstern for $4.99

Bad Blood by John Carreyrou for $3.99

The Greatest Love Story Ever Told by Megan Mullally & Nick Offerman for $1.99

A Discovery of Witches by Deborah Harkness for $2.99

When We Left Cuba by Chanel Cleeton for $1.99

Outlander by Diana Gabaldon for $1.99

This Is Where I Leave You by Jonathan Tropper for $1.99

The Kiss Quotient by Helen Hoang for $2.99

The Long Goodbye by Raymond Chandler for $0.99

Moon of the Crusted Snow by Waubgeshig Rice for $3.99

Horrorstor by Grady Hendrix for $1.99