This content contains affiliate links. When you buy through these links, we may earn an affiliate commission.
Receive a FREE BOOK credit with a pre-order of BOOK LOVERS by Emily Henry 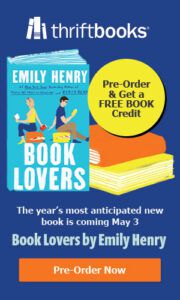 Today’s edition of Daily Deals is sponsored by ThriftBooks. Receive a FREE BOOK credit with a pre-order of Book Lovers by Emily Henry.

$2.99 Tender Is the Flesh by Agustina Bazterrica
Get This Deal
$1.99 The Queen of the Tearling by Erika Johansen
Get This Deal

The Lost and Found Bookshop by Susan Wiggs for $2.99