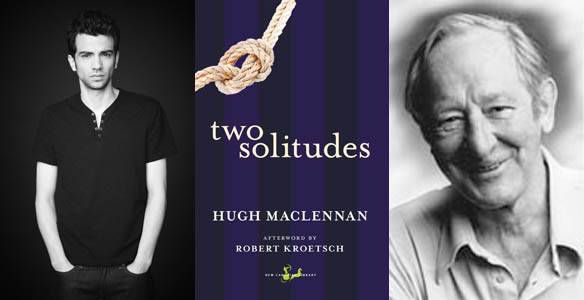 So Canada Reads is a BOOK RIOT EVENT this year, y’alls — I laid out all the goodies in this post, and this is the second week of our seven-week mini-spectacular.  We’re onto TWO SOLITUDES by Hugh MacLennan (1945) now, deep into the heart of classic CanCon.  Today you’ll read this intro post, I’ll be Tweeting my reading progress all week at #brcr4 (please please please read-a-long and tweet-a-long with me!), and then I’ll meet you on the Twitters on Thursday (January 31) for an hour-long chat at 7:30 EST (4:30 PST) to discuss the novel.

Hugh MacLennan is the only dead white guy on the list for Canada Reads this year, but he’s probably one of our most famous sons.  To lend a little contemporary life to this classic novel, TWO SOLITUDES will be championed by Jay Baruchel in the debates.

It’s been said that this is the one novel that you need to read if you want to understand Canada.  I’ve read a lot of Hugh MacLennan, but never this — arguably his most celebrated novel and the one that won the Governor General’s Award in 1945.  The two solitudes of the title refer to French and English Canada and the religious and cultural divides that separate the two colonial founding halves of the country; MacLennan posits that Montreal, where the two groups mingle, is the heart of Canada, and to understand how this relationship works is essential to making sense of how this nation functions.  (When you think about it, to have your two founding settler nations be two nations, England and France, so fundamentally opposed to one another can only be the basis of trauma.  Or sitcoms.)

This is the only one of the books I started in advance, because it’s a bear-like 528 pages, and so far my favourite notion is the notion that the English Canadians are more English than the English and the French Canadians more French than the French.  I know many Rioters will have already read this book in high school or university, and I hope you’ll weigh in on the discussion even if you’ve been away from it for awhile.

I have to admit, I’ve long avoided this book.  The notion of TWO SOLITUDES in a multicultural country seems so out-moded to me, and the fact is as a colonizer/colonized country there were never, ever only two nations to consider.  But I’m in for a penny with Canada Reads so I’m giving this one a go.

Please do share your experiences of TWO SOLITUDES, lest I be one solitude working through this tome of a CanLit classic.