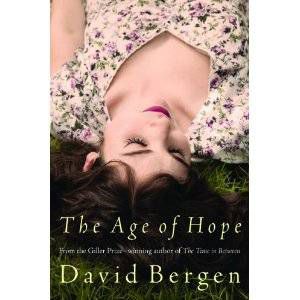 So Canada Reads is a BOOK RIOT EVENT this year, y’alls — I laid out all the goodies in this post, and this is the second week of our seven-week mini-spectacular.  We’re starting with THE AGE OF HOPE by David Bergen (2012).  Today you’ll read this intro post, I’ll be Tweeting my reading progress all week at #brcr1 (please please please read-a-long and tweet-a-long with me!), and then I’ll meet you on the Twitters on Thursday (January 17) for an hour-long chat at 7:30 EST (4:30 PST) to discuss the novel.

So who is David Bergen, and what is THE AGE OF HOPE all about?

THE AGE OF HOPE is the prairie selection for Canada Reads this year, and David Bergen is a writer based in Winnipeg, Manitoba.  He has published 7 novels and 1 collection of short stories, and THE AGE OF HOPE is his most recent book.  He has had a New York Times Notable Book, has been a finalist for the Governor General’s Award and the IMPAC Dublin Prize, and has won the Giller Prize (and been a finalist numerous times).  He was a high school teacher of English and creative writing until 2002.

Bergen was raised in the Mennonite Church; he says that the feeling of having questions stifled led him to writing fiction, where he could engage much more deeply in critical thought.

THE AGE OF HOPE follows the stages of life of Hope Koop from 1930 to the present day.  We walk with Hope through the stages of a woman’s life as the world and the economy shift and change around her.  A woman destined for a conventional life in 1930 was also destined for a lot of changes, and as readers we get to experience things like Hope’s first exposure to The Feminine Mystique and changing views about a woman’s role.  How Hope copes with a world in flux is central to the narrative of THE AGE OF HOPE.

I’ve collected some reviews around the internet that I liked, like those by Reeder Reads, Literary Hoarders, Charlotte Ashley, and Books and Blossoms.  It looks like people are pretty positive about AGE OF HOPE, so I’m looking forward to this week’s read.  Hope you join me on Twitter for the read-along-tweet-along at #brcr2, and for our discussion party on Thursday evening!