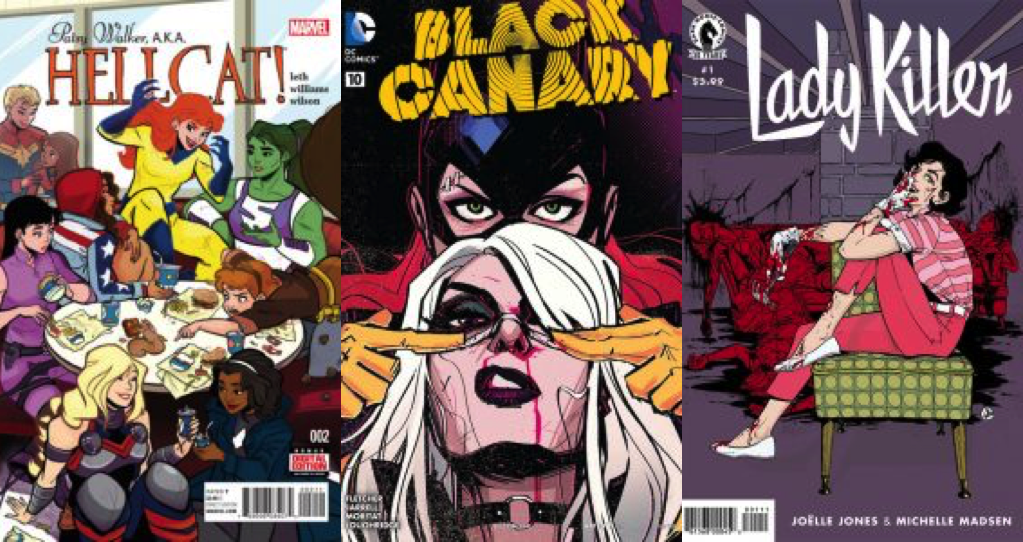 With 2016 coming to a close, the Book Riot Comics crew came together to bring you our favorite covers of 2016. Whether they were visually stunning, emotionally compelling, or just plain fun, these were the covers that stuck with us and reminded us why it was we loved comics in the first place. 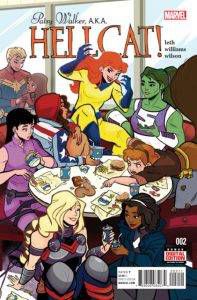 2016 might have had some truly visually striking covers, but Patsy Walker, A.K.A. Hellcat #2 had my hands-down favorite, with it’s imagery of Marvel’s female superheroes just grabbing lunch. There’s so much awesomeness in this image: Carol taking Kamala under her wing, Doreen fighting with Tippy-Toe over a nut brownie (while acorns spill out of her utility belt), Kate having no idea how to react, and America looking cool as fuck while Patsy excitedly tells some story. I want my life to be this cover. (Charles Paul Hoffman) 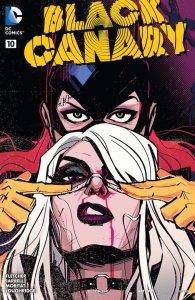 Everything about this cover is badass – the broken nose, the sneer, the intensity of those green eyes. Wu sets the tone of the story. Without even opening the comic you know this is a Babs and Dinah team up and they didn’t come to play or lose. (Keri Crist-Wagner) 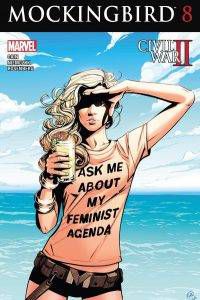 Confession: I have the t-shirt inspired by this cover from welovefine, and I wear it when I’m feeling particularly frustrated by the world and it makes me feel awesome.  Here’s the thing: this comic is fun, funny, and unapologetically feminist and this cover is not going to hide any of those things from you. (Sonja Palmer) 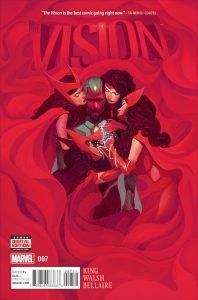 Del Mundo’s cover work at Marvel has been nothing short of stellar, but months later this is the cover that has stuck with me the most. The undulating waves of the Scarlet Witches’ capes lend movement to the image even subsuming the title. Scarlet dominating the field and drawing the eye to the center – a still, dejected Vision. The various Wandas evoke imagery of the Norns pulling on a string, but here it’s the four eras of Wanda pulling at the Vision’s heart. It perfectly reflects the story within while telling a story of its own. (Brian McNamara) 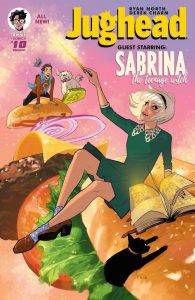 In the age of perpetual sequels/prequels/reboots, concept is everything. If I know nothing about the Archie universe, then how strong is the concept of a burger-loving teenage boy going on a date with a teenage witch? How does the average reader invest in characters who have existed for so long who are now in the hands of a new creative team and timeline? In Fiona Staples’s hands, the answer is, “I want this flying hamburger adventure now, so take my money!” (Comic also available through hip libraries in print and digital.) Throw in the lovable dog Hot Dog and talking cat Salem, and North/Charm/Morelli had better bring the magic on their end to keep up (it’s all good). (Thomas Maluck) 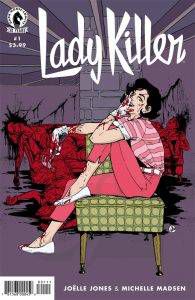 This cover so perfectly sums up this darkly delicious and awesome comic. Look at Josie in her sweet outfit perfect for looking the housewife part and running errands, maybe a quick stop at the country club–oh wait, is that a pile of bodies behind her? And so much blood! Could she possibly have been responsible? Is she smiling?! The answer is yes, to all the questions. (Jamie Canaves) 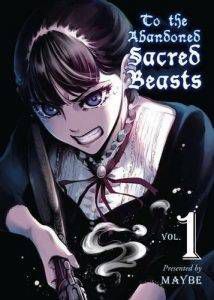 To the Abandoned Sacred Beasts vol. 1 by Maybe

Action-adventure manga covers generally focus on the cool, powerful, and/or sexy, so the raw emotion in this cover is all the more impressive by contrast. There’s no visible setting, but the clothes, gun, and even that high-bang hairstyle communicate the Western-inspired world instantly. And this girl! She’s afraid, but she won’t retreat. She cries, but she never takes her eyes off the target. She’s young, but she feels like a warrior. (Megan Cavitt) 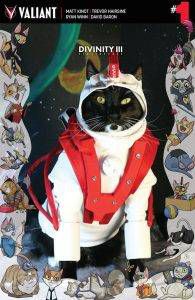 Cover by Cat Cosplay of the Feline Variety

It seems like a cop-out to pick a cosplay variant cover as my favorite comic book cover of 2016 but…cats. Comics has a lot of problems and issues, but Valiant’s line of cat cosplay variant covers highlights everything RIGHT about comics. I had trouble picking my favorite, but given my love of space travel and my love of the Divinity series, I had to go with the cat in the spacesuit. CATS. (Swapna Krishna) 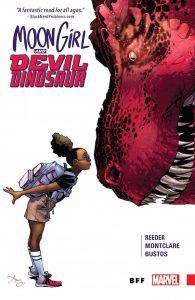 What an introduction, huh? Just a little girl preparing to kiss a giant grinning dinosaur on the top of its nose. We already know a lot about Lunella just from this image: she’s bold and fearless, and maybe goes into things without thinking about them. But school has some place in her life, as we see from the backpack the same size as her. And, I’ll just point out the obvious: seeing a bespectacled little black girl with a giant natural textured ponytail made me determined to read this; loving it to pieces just made it even better. (Jessica Pryde)