Not so long ago, I wrote about my Blood Meridian obsession in The Book I Cannot Stop Reading. But even though BM is the book I return to over and over, it’s not even close to holding the title for the book I’ve read the most.

A brief digression into cyborgs and cinema:

I wasn’t allowed to watch R-rated movies while I was growing up. This was a function of being raised Mormon, and of one unfortunate incident when my little brother came back home from a cousin’s house after having watched Robocop.

It never bothered me too much, this movie restriction, until I saw the preview for Terminator 2: Judgment Day. I’d never seen anything like it. (I still haven’t, for that matter.) I was obsessed.

Arnold in that leather jacket. The semi coming off the bridge to smash into the ground by Edward Furlong’s motorbike. The liquid metal man, T-1000. Linda Hamilton’s squared off shoulders. Etc.

I begged my parents to let me watch it, just this one R movie, and then I’d never watch another one.

“No,” said my mom, cleaving to righteousness.

“No,” said my dad, with pain in his voice, obviously dying to watch it himself.

Next I begged them to watch it first, then to watch it with me so they could fast forward the really violent stuff, or cough during the profanity. 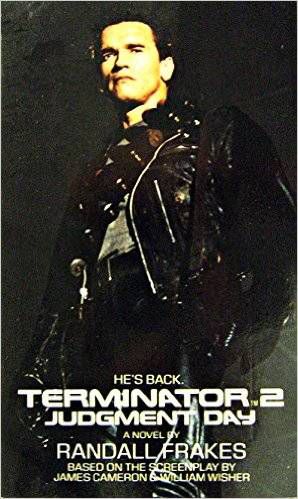 But it was not to be, although he’d tell me much later that he saw it in the theater. My dad and I reached a compromise of sorts. He returned from a business trip and surprised me with the novelization of Terminator 2.

Just look at it.

I nearly wept with joy. I was fifteen years old and took to my bed instantly, reading it over and over.

And over and over.

I would estimate that I read the book at least one hundred times over the next three years. I’m always wary of memories that present themselves with the tantalizing clarity that would help me make a point for a blog post, but I can’t remember reading much of anything else during those couple of years, although I know that was when I got into Terry Brooks and the Shannara series.

I finally watched Terminator 2 at a sleepover. I’d read the book so many times that I knew most of the lines. I could quote Linda Hamilton’s speech about the future not being set. My heart ached for Miles Dyson as he stared in wonder at the cybernetic hand. I knew what video game John Connor would be playing in the arcade when the T-1000 showed up to win the war for Skynet. I practically knew when the actor Edward Furlong would flick his hair out of his eyes.

And when I finally watched the movie, it was even better than I ever could have dreamed. That began a new obsession: watching the movie every second I could get away with it.

Is this a superior addiction? Perhaps.

But I’m certainly not addicted to the movie tie-in version of anything else.

What about you all? Do you know which book you’ve read more than any other? Think of books you’ve chosen to read, not the one billion recitals of Chicka Chicka Boom Boom that were read to many of us as kids.