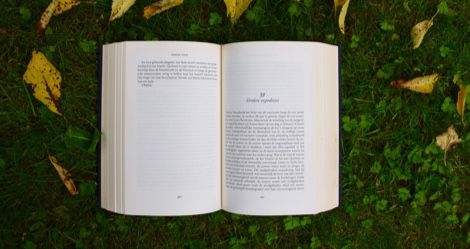 The Qur’an. A law book. The Tanakh. During the swearing-in ceremonies for the incoming 116th Congress, these were a few of the atypical choices that congresspeople made for their oaths of office.

Rashida Talib and Krysten Sinema weren’t the first congresspeople to eschew the Christian Bible for their oaths, or even alone in their class—as pointed out in a Pacific Standard piece, the Bible is neither required, nor has it always been everyone’s choice—but in a new Congress whose diversity was already making the old guard tremble, their choices were noted.

I noted them with a mixture of delight and interest. Reading that other choices were as varied as the The Autobiography of Malcolm X, a Kindle, and even nothing, made me wonder: what might other readers choose to swear on?

As a Jewish woman, I initially thought I’d choose the Tanakh, too. But then, there’s that pesky commandment about not swearing oaths on God’s name (unless you’re absolutely, stake-your-being-on-it sure that you’re going to keep them). The Talmud, in which rabbis argue continually about what the precepts of the Hebrew Bible mean, might be a better choice for a civil servant facing similar kinds of never ending debates (although in its heft, it would represent a challenge for the person administering the oath). But I also believe strongly in keeping church and state separate, so why not go for a book less religious, but still entirely about encompassing my personal values?

Emily Nussbaum of the New Yorker also posed this question to her followers—and got a bevy of interesting answers:

If you were elected to political office and you weren’t allowed to swear in on a religious text, what book would you use?

Are you there God, it’s me Margaret

I would use the *actual* Hitchhikers’ Guide to the Galaxy.

I would be devastated to break an oath sworn on this baby: pic.twitter.com/quSJ73PLBH

The People’s History Of The United States.

I cycled through possibilities myself. In the end, I think I’d choose Carl Sagan’s Pale Blue Dot. Sagan’s book checks all of my boxes—and I think of it as part of my Jewish canon, even though he’d resist that designation. It is all about possibilities and about understanding our place in the vast, ever-expanding universe. Its lines are thrilling and humbling, including opening salvos:

“Look again at that dot. That’s here. That’s home. That’s us. On it everyone you love, everyone you know, everyone you ever heard of, every human being who ever was, lived out their lives. The aggregate of our joy and suffering, thousands of confident religions, ideologies, and economic doctrines, every hunter and forager, every hero and coward, every creator and destroyer of civilization, every king and peasant, every young couple in love, every mother and father, hopeful child, inventor and explorer, every teacher of morals, every corrupt politician, every ‘superstar,’ every ‘supreme leader,’ every saint and sinner in the history of our species lived there—on a mote of dust suspended in a sunbeam.”

Awesome and scientific, Sagan’s book reaches toward our imagined future among the stars—still keeping an eye on what we do here and now, and why those actions matter. Swearing on this book would represent a promise to keep everything in perspective; it seems like an appropriate choice for a civil servant’s oath.

In the examples of the 116 Congress, we’re reminded of our diversity, religious and otherwise, and of the fact that we’re not all bound to the same religious precepts—or to any religious precepts at all.  If you’re swearing on a text, it should be one that you’d feel strongly about being held accountable to, and one whose ideas represent the kind of leader you’d want to be.

Dykes to Watch Out For by @AlisonBechdel

Harry Potter because I solemnly swear I am up to no good.

What book might you choose to swear in on?