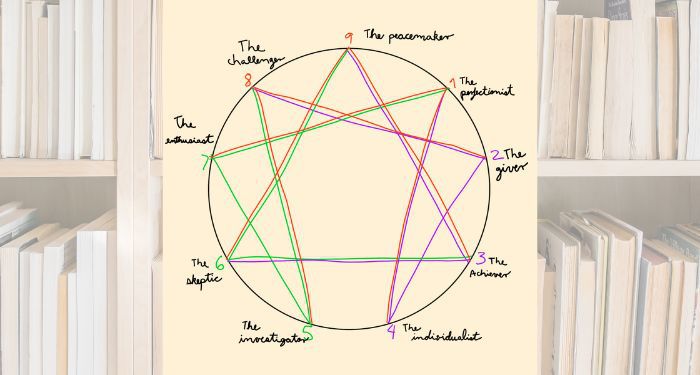 We’ve sorted book characters by their Myers-Briggs type before. Now it’s the Enneagram’s time to shine. This is actually my favorite typology system. This is because my own family has studied it, and I have a closer relationship to it than other systems. My parents even identified my type from a very young age (I’m a Four in case you were wondering). Before we get into the sorting, we have a little thing to get out of the way. What the heck is the Enneagram?

Quick intro to this typology system: the Enneagram is made up of nine basic personality types. Each is identified by their respective number. One of these types is dominant, so consider it the core of your personality. Here’s a quick sketch of the diagram, courtesy of me:

Each type has its own set of characteristics which make up the core of your personality. But it’s not that simple because humans never are. The Enneagram considers what it calls “wings,” which are the numbers (or types) beside yours that also make up your personality. Which is why you sometimes see that someone is a 4w5. Meaning a Four with a Five wing.

Another thing to take into account is that there are behaviors or traits from your type that change depending on how “healthy” you are. They call these the levels of development, and they basically mean that you can have healthy, average, or unhealthy traits that do belong to your type depending on how you feel. Take it as how you would behave at your best, everyday, or at your worst. For example, a healthy Four is inspired and creative. An unhealthy Four is alienated and emotionally frozen.

For today, and to keep things simpler, I’m going to sort book characters by their core Enneagram type — from One to Nine. So without further ado, let’s get to it!

Book Characters by their Enneagram Types

Ones are sticklers for rules. They hold everything up to their own high standards and are perfectionists in order to avoid making mistakes themselves. Ones also have a high ability to concentrate on the task at hand in order to achieve their goals. When they are healthy, they are more tolerant of chaos and they have a strong sense of fairness. Unhealthy, Ones are obsessed with control and can be prejudiced.

Then come the Twos, who are the most empathetic and caring of the bunch. They are kind and reliable and love helping others. Twos tend to be altruistic, and they find a strong sense of meaning from helping their loved ones. When they are healthy, they are selfless caregivers who recognize their self-worth. Unhealthy, Twos base their self-worth over the criticism of others and can become overbearing and even manipulative

Threes have a big desire to stand out because of their achievements. They are friendly, productive, and hard-working — they like to keep busy and to have “nice things.” Threes tend to focus on their image, which basically means that they care about their appearance. When they are healthy, they are driven, kind, and willing to help others. Unhealthy, Threes are very jealous and competitive; they seek reassurance from others but still find it unfulfilling.

Fours are defined by their strong sense of self-identity. They tend to look inward to figure out who they truly are, and they pride themselves on their “unique” traits. Fours delight in self-expression and constantly look for creative outlets to show their true selves. When they are healthy, they are highly attuned to their emotions and very creative. Unhealthy, Fours are excessively moody and self-destructive — they can even lose their grip on reality.

Next come Fives. They are introverted people who like to direct their energy towards their inner world rather than the outer one. They want to be free and self-sufficient so they focus on gaining as much knowledge as they can. Fives are also curious and analytical, and tend to look at things critically. When they are healthy, they are huge intellectuals who freely share their knowledge with others. Unhealthy, Fives are cut off from the rest of the world. They develop a tunnel vision that affects everything around them.

Book characters with an Enneagram type Five include: Yadriel (Cemetery Boys), Aristotle Mendoza (Aristotle and Dante Discover the Secrets of the Universe), Nora Seed (The Midnight Library), Kafka Tamura (Kafka on the Shore), Leah Burke (Simon vs. the Homo Sapiens Agenda), Elizabeth Harmon (The Queen’s Gambit), Jiang Xi (The Husky and his White Cat Shizun), The Biologist (Annihilation), Chen Kitay (The Poppy War), and Shahrazad al-Khayzuran (The Wrath and the Dawn).

Sixes are hypervigilant and logical people who like to plan. They want to have a safe and secure environment, so they tend to strategize to avoid bumping into trouble. This is why Sixes are considered “survivalists.” Dedicated and loyal, they love feeling connected to the people around them. When they are healthy, they are caring and thoughtful team players. Unhealthy, Sixes can be very paranoid and codependent.

Sevens are lively and charismatic people who love to bounce from one activity to another in order to maximize their happiness. Always busy, they seek new and exciting experiences with childlike enthusiasm. Sevens are open-minded, but they tend to downplay negative feelings. When they are healthy, they focus on the task at hand — all with infectious energy and the ability to see the silver lining. Unhealthy, Sevens are burnt out and cynical — they lose their sense of groundedness in reality.

Next, Eights are confident and assertive people that dislike showing weakness. They stand up for what they believe in and protect those around them. But they also want to be independent and in control. They blaze boldly through life with their heads high, “rebelling” against the rules. When they are healthy, they’re strong leaders and generous friends. Unhealthy, Eights are intimidating and unemotional with big delusions of power.

Last but not least, Nines are easygoing people who want nothing more than a peaceful environment. Because of it, they often avoid conflict or dealing with unpleasant emotions. They’re great mediators and can help others understand a different perspective. When they are healthy, they are optimistic people who can maintain harmony within a group — along with their self identity. Unhealthy, Nines can become lethargic and unfocused, going through life on autopilot.

If you want to read more about the Enneagram, we’ve got a ton of books about personality types. Or how about some book recommendations depending on your own personality type?