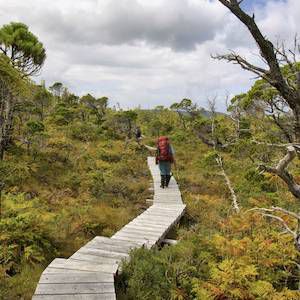 This is a guest post by Natalie Meyer. Natalie quit her job to travel the world with her husband and a Kindle loaded with books. In her spare time, she can be found taking photos, reading, and writing about her travel adventures at www.thosetravelmonkeys.com. Follow her on Twitter @TravelwithTTM.

If the point of life is the same as the point of a story, the point of life is character transformation. If I got any comfort as I set out on my first story, it was that in nearly every story, the protagonist is transformed. He’s a jerk at the beginning and nice at the end, or a coward at the beginning and brave at the end. If the character doesn’t change, the story hasn’t happened yet. And if story is derived from real life, if story is just condensed version of life then life itself may be designed to change us so that we evolve from one kind of person to another.

― Donald Miller, A Million Miles in a Thousand Years: What I Learned While Editing My Life I had just finished school and was finally working at a real, adult job. I was doing all the other adult-y things you’re expected to do, too: eating healthy meals, going to bed on time, buying fancy kitchen appliances, etc. I was happy. I was comfortable. I was bored.

It wasn’t the sort of story I thought my life would become. After years of reading adventures about sailing the high seas, fighting the powers of evil, and bumbling into a handsome man who would find me charming despite my flaws, I didn’t think my life would be so mundane. My closets did not come with magical worlds and talking animals (just work clothes). I have never been allowed to volunteer as tribute to save a family member. My father refused to be killed by the six-fingered man so I could avenge him. I haven’t even received my invitation to Wizarding School yet. The only thing I ever got in the mail was bills and they weren’t even delivered by owls!

I didn’t know what to do to change my life but I thought an adventure would present itself if I waited long enough. Then I read A Million Miles in a Thousand Years. There are a handful of books that say exactly what you were thinking (even if you didn’t know you were thinking it) at a time in your life when you are looking for a change. This was one. The author, Donald Miller, was approached to turn his memoir into a movie. While meeting with the producers, he realized his current life could never be made into an actual movie. There were no iconic scenes, challenges to overcome, or growth. He writes how we all create stories about our lives through the way we live. Sometimes we are living in the wrong story and once we start casting ourselves as a different character, our lives can become more compelling. In essence, I shouldn’t wait for life to hand me an adventure – I should become an adventurous character and the adventures would follow.

It would be a vast understatement to say that the book struck a nerve. I quit my job. I sold my stuff (all of it). I loaded up a backpack and I left to travel around the world. My new, adventurous character has eaten crickets, slept on the deck of a boat while hunting for (Komodo) dragons, taught English in Cambodia, fed cheetahs, and been bounced out of the Vatican for hopping a fence to snap a picture of the Popemobile. I even hope to be pickpocketed or locked out of hotels or lost so that I can turn it into another tale, much to the dismay of my husband. I might be getting a little out of control.

My new story isn’t always wonderful – there is always loneliness, boredom, and fear. Sometimes I miss the old, comfortable story of my life because it wasn’t bad. It just wasn’t what I wanted it to be.

We all see ourselves as a certain character at times (a brain, an athlete, a basket case, etc.) and I found it disheartening to think that I would play that role of “responsible adult” for the rest of my life. The new story I’m telling isn’t perfect but I found that it’s never too late to start crafting a new story; a story closer to what and who I wanted to be. Miller’s book was the perfect one to bring that to light at a time in my life when I was looking for a change.

How about you? Which character do you want to be? Are there books that have influenced you to become more like the people you read about?